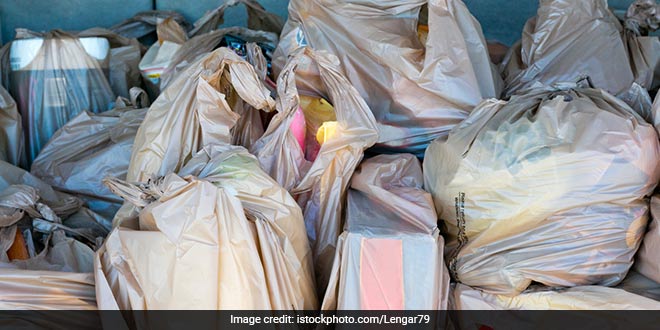 New Delhi: Immediately after the Maharashtra government issued a notification in March, banning the use, storage, sale, distribution and transportation of select plastic items, the Brihanmumbai Municipal Corporation (BMC) got into action and prepared a procedure for collection and disposal of banned plastic items. As a first step to collect the banned plastic, the civic body placed plastic collection bins at 25 strategic high-footfall locations such as markets and railway stations, where citizens can drop banned plastic items such as bags, plastic cutlery, thermocol and decoration items. The corporation also launched a helpline number for housing societies to get plastic collected from their premises. The efforts of the BMC to collect plastic has started yielding results – across its 24 administrative wards, the corporation has collected over 120 tonnes of plastic since April.

The Brihanmumbai Municipal Corporation urged the residents to get rid of the banned plastic by June 23, as its usage post the deadline will attract fine. For people who were confused about what to do with the stock of plastic lying at their homes, the BMC also launched a telephone service where they can make a pick-up request for their plastic items. And to further spread the message among the people to dispose of their plastic waste at the nearest plastic collection centre, the BMC officials also used the social media platforms.

Even the Deputy Municipal Commissioner, Nidhi Choudhari took to Twitter and urged the people to reduce and refuse the plastic usage, and extend their support to plastic ban by depositing plastic bags and thermocol etc products in Plastic Waste Collection Bins.

We use thousands of plastic carry bags for a few minutes and then throw them in environment where they don’t degrade for centuries, said Nidhi Choudhari.

The banned plastic items from societies and commercial establishments have been collected by the garbage trucks. The residents placed their request to collect plastic by calling toll-free helpline (180222357) for pick-up service. Initially, there was a confusion among Mumbaikars with regards to disposing of the plastic items and through this pick-up service we eased the whole process.

Contributing towards making Mumbai a plastic-free city, the residents came forward and deposited the plastic in huge numbers.

Also Read: What Does It Take To #BeatPlasticPollution? Actor Dia Mirza Explains

According to the data provided by the BMC, of the 120 tonnes of plastic waste, 108 tonnes was collected through its helpline number, where the people called the BMC to collect the plastic from home.

The plastic collection drive saw massive response in residential areas. People having large deposits of plastic items (plastic sheets, plastic pouches, all kinds of plastic films, plastic and thermocol cutlery) called us to collect the plastic items, thanks to the toll-free helpline for plastic pick-up service. We are hopeful that more people will come forward to deposit the plastic stacked at their homes since Jun 23 is the deadline. We are also running short advertisements in all theatres, and will hold street plays and rallies in Mumbai, appealing the people to call on toll free number and submit the plastic,” said Kiran Dighavkar, Assistant Commissioner, BMC.

When asked about what measures are being taken the civic body to provide the people an alternative to plastic, Nidhi Chaudhari said that the corporation has put is a list of women self-help groups manufacturing cloth, jute and paper bags on its official website. The civic body is also welcoming manufacturers of plastic alternatives to come forward and get listed with the corporation.

Taking a cue from this collection drive that people actually come forward to deposit their plastic waste, the civic administration is now planning to continue organising such plastic collection drives and also set up more disposal units across the city.

Beware Hyderabad: Your Discarded Plastic Item Will Be Exhibited Under The Black Bag Campaign

In A First, Smart Toilets With Swanky Cafes And ATM Services Make Their Debut In Hyderabad