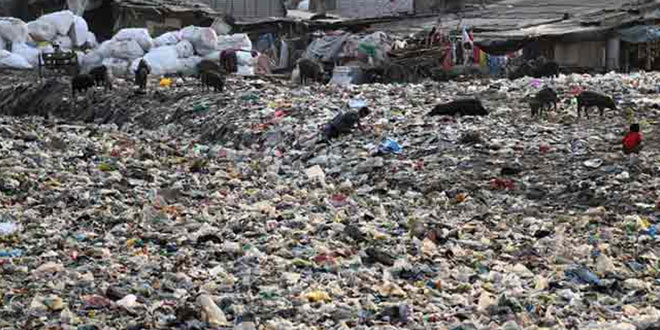 New Delhi: The sight of Marine Drive in Mumbai on July 13 was a shocking one. Tonnes of garbage were thrown up by the sea along Marine Drive due to high tide, resulting in severe stink throughout the stretch. The Brihanmumbai Municipal Corporation (BMC) employed 55 workers to remove 12 tonnes of garbage, but came under heavy criticism by the Bombay High Court. Terming the incident of the sea throwing up tonnes of garbage along the Marine Drive here during a high tide as “serious”, the Bombay High Court asked the Maharashtra government and the city civic body today for a solution to the problem. A division bench of justices A S Oka and Riyaz Chagla were hearing a PIL filed by a city-based NGO, ‘Citizens Circle for Social Welfare and Education’, seeking direction to the authorities concerned to frame guidelines on garbage and debris disposal and its discharge into the sea.

Authorities had earlier said that most of the trash that had washed up to Marine Drive comprise plastic waste. The petitioner’s lawyer, Shehzad Naqvi, pointed out to the court that earlier this month, around 9,000 tonnes of debris and garbage was spewed by the Arabian Sea along the Marine Drive promenade in south Mumbai during a high tide.

This is a serious issue. What is the solution to this? There is so much of garbage, debris and sewage discharged into the sea. The civic body will have to do something about this, asked the High Court bench.

Indiscriminate disposal of waste in seas and beaches has resulted in high marine pollution across Mumbai’s shoreline. While beach clean-ups by environmentalists in beaches like Versova and Dadar have made them much cleaner, disposal of waste by individuals and ships near the Mumbai coast continue to be a problem for the sea. The bench also criticised the Brihanmumbai Municipal Corporation (BMC) for discharging large quantities of untreated sewage into the sea, as per a report submitted by the the Maharashtra Pollution Control Board (MPCB) in October 2017.

As per the report, out of 2,671 million litre of sewage per day, 2,016 million litre is treated at eight sewage treatment plants by the BMC. The remaining 655 million litre of untreated sewage is discharged directly into the sea at different locations,” said Justice Oka.

The BMC said that steps were taken to immediately clear the trash and its workers cleared more than 12 tonnes of waste. The civic body was working to set up two more sewage treatment plants to treat the remaining untreated sewage generated from the city and plans to set up the STPs within the next two years, said a BMC official.

The recent incident at the Marine Drive has shown that the discharge of such a large quantity of untreated sewage in the sea is causing the pollution, Justice Oka said. The court has directed the BMC and senior officials of the state’s Environment department to file their affidavits on August 10, enlisting steps to deal with the issue.