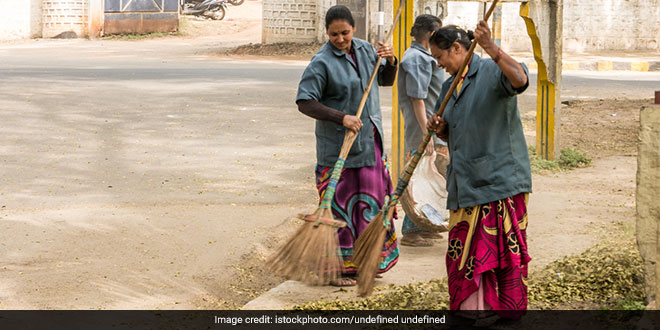 After the launch of the sanitation drive, L-G also inaugurated the newly constructed multi-level car parking and community hall in Subhash Nagar

New Delhi: Delhi Lieutenant Governor Vinay Kumar Saxena on Tuesday launched a sanitation and cleanliness drive titled Operation Clean Delhi from the Mayapuri area and said that the role of Safai Karamcharis in making the city clean is commendable. The L-G actively participated in the programme to encourage the Safai Sainiks and recognised their efforts by presenting them with a rose flower. Under this campaign, each zone to cover at least four wards per zone per week and various sanitation activities will be conducted in coordination with RWAs and Market Association over one month.

After the launch of the sanitation drive, L-G also inaugurated the newly constructed multi-level car parking and community hall in Subhash Nagar.

In the spacious and multi-storey building, a community hall equipped with all modern facilities has been constructed on the upper floors and a multi-level -car parking is developed in the basement floors. On the occasion, a street play on the waste management system was also presented. Apart from this LG also awarded the Safai Sainiks for their excellent performance in West Zone.

Highlighting the efforts of the Safai Sainiks, Vinay Kumar Saxena said that the role of the Safai Karamcharis in making the city clean is commendable. In this unique initiative, “Operation Clean Delhi” Safai Saniks and the people of Delhi should work together to make the city clean & beautiful.

Referring to the G-20 summit to be held in Delhi, he said that foreign guests from all over the world will visit the capital of India, we must focus on the cleanliness and beautification of Delhi so that guests carry a good impression of our city with them. In this effort, along with the contribution of the Safai Sainiks, the active cooperation and participation of the citizens are necessary.

He said that the Municipal Corporation of Delhi is making continuous efforts to reduce the height of the three landfill sites and to dispose of the legacy waste. The average waste disposal per month from the year 2019 to 2021 was about 1 lakh 40 thousand tons and this year from June to September this average increased to 6 lakh 60 thousand tons. He said that the mountains of garbage at the landfill sites have also been reduced by 15 to 20 metres.

L-G said that despite financial challenges and limited resources, MCD is successfully completing various developmental projects for the people of Delhi. He said that the construction of car parking and a community hall would benefit the people of the area on a large scale. He said that it is easy to build facilities but it should be ensured that there is optimal utilization of the facilities by the citizens. He also said that an anti-encroachment drive is being carried out on a large scale in Delhi. He added,

I would ensure that the people of Delhi should get at least 2 meters of encroachment-free clean footpaths.

Member of Parliament Parvesh Sahib Singh Verma said that one parking lot in the Subhash Nagar area was also dedicated to the public in 2017 and with the construction of this parking lot today, the citizens of Subhash Nagar have 2 parking facilities in their area.

He said that despite the paucity of funds, new parking sites are being constructed by the corporation. MCD has proved that with efficient financial management, developmental projects can be completed in time. He said that Delhi Govt only believes in the cheap politics of advertisement but we have shown them with good intent and hard work, every development work can be completed successfully.

Special officer Ashwini Kumar said that this newly constructed community hall is no less than any private banquet hall. All modern services have been provided in this building for the citizens. He said that Operation Clean Delhi is carried out in every zone under the supervision of the zonal deputy commissioners and every effort would be made to make it successful.

Giving detailed information about the newly constructed car parking and Community Hall, Commissioner Gyanesh Bharti said that the construction cost of this building is about Rs. 42 crores and the total plot area is about 4,800 square meters. This parking lot has the capacity to park 236 cars in the basement floors of the building and ground plus 3 floors are constructed in the Community Hall.

Facilities like lifts, fire fighting systems, ventilation facilities, transformer are also provided for the convenience of the citizens.