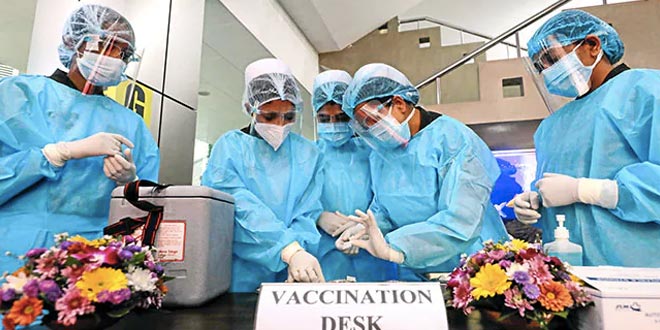 In the age group of 15-18 years, the number of adverse events following immunization (AEFI) reported are -- 1,739 (minor), 81 (serious) and six (severe), says the Central Government

New Delhi: The expansion of COVID-19 vaccination drive to include the paediatric population “does not pose a safety risk” to the vaccine recipients, the Centre told the Supreme Court on Tuesday while referring to data as per which 8.91 crore doses of Covaxin has been administered in the age group of 15-18 years as on March 12.
It said that in the age group of 15-18 years, the number of adverse events following immunization (AEFI) reported are — 1,739 (minor), 81 (serious) and six (severe). The Centre told a bench of Justices L N Rao and B R Gavai that desirability or otherwise of vaccinating children is a decision in the executive domain taken by the government as per the advice of domain experts and, therefore, may not be subjected to judicial review.

The top court is hearing arguments on a plea seeking directions for disclosure of data on clinical trials of COVID-19 vaccines and post-jab cases.

“It is evident from this data that the expansion of vaccination drive to include the paediatric population does not pose a safety risk to the vaccine recipients,” the Centre said. It dealt with the petitioner’s submission regarding serious adverse events in children in age group 15-18 who have been vaccinated in other countries.

The so-called serious adverse events in children referred therein are with regard to mRNA vaccines. These vaccines are completely different from the vaccines being administered in India. At the present moment, India is not administering mRNA vaccines. This fact coming from a person claiming to have special knowledge of the subject clearly reflects intentional attempt to mislead, the government said.

It said the question of paediatric vaccination was taken up at a stage where more than substantial data on safety and immunogenicity of Covaxin in adults was available and with a view to not taking any risk, clinical trials were also conducted in a limited number of children as per the protocol approved by the domain experts.

Having found no serious adverse event in above referred trials, the paediatric vaccination was initiated in a phased manner i.e. starting from the eldest paediatric age ground i.e. 15 to 18 years, the Centre said.

It said all these decisions were taken by the subject expert committee (SECs) periodically which included experts from various domain specialities and the decision making was based upon expert advice.

The arguments that children are less susceptible to Covid and, therefore, should not be vaccinated, is surprising coming from a person claiming to be an expert. All paediatric vaccines are always preventive in nature and are administered so as to avoid any possible infection and eliminating any potential risk of infection, it said.

The government also told the top court that there is increasing scientific evidence regarding prolonged clinical symptoms (known as “long COVID”) which is still under scientific study. It said all global agencies like the World Health Organisation (WHO), UNICEF, CDC (Centre for Disease Control), USA are emphatically advising for paediatric vaccination in accordance with the global scientific consensus in favour of paediatric vaccination as on date.

The Centre said no country in the world has faced such an unprecedented crisis which is faced by humanity due to the COVID-19 outbreak since about last 100 years.

It said as on March 13 this year, a total of over 180 crore doses of COVID-19 vaccines has been administered in the country and 77,314 adverse events, which comes to 0.004 per cent, have been reported.

The government told the bench that minor AEFI are events such as pain at injection site, mild fever, swelling at injection site etc and these effects are self-limiting in nature and resolve on their own within a day or two.

It said severe AEFI are events such as high fever of 102 degree and above and anaphylaxis, a severe, potentially life-threatening allergic reaction which needs to be clinically treated.

The Centre said serious AEFI are those which may result in death, hospitalization, persistent or significant disability and cluster event.

Furthermore, medical treatment is being provided free of cost to beneficiaries who suffer AEFIs in all government health institutions. States/UTs have been asked to identify at least one AEFI management centre in each block, it said.

On the issue raised in the plea regarding disclosure of segregated clinical trial data, the Centre said that by the very nature of the subject matter, there is a confidentiality attached to certain parts of the clinical trial process which cannot be compromised under the law.

It said so far as the raw or segregated data generated at trial sites are concerned, the said data is always called for and examined before grant of either emergency use approval or final approval by the statutory committee of domain experts and by the approving authority.

The plea has sought directions to make public the segregated data of clinical trials for vaccines that are being administered in India under the emergency use authorisation granted by the Drugs Controller General of India.