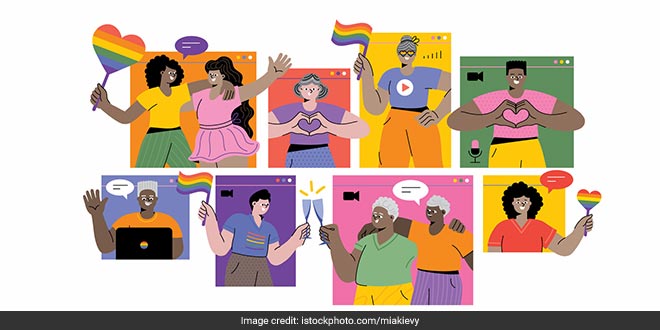 New Delhi: Come June and one gets to see rainbow coloured flags flying high in the sky, people marching with painted faces and flags and posters in their hands, across various parts of the world, expressing solidarity with the LGTBQ+ community. The month of June is celebrated as Pride Month and observed in several countries to commemorate the struggles and victories of the LGBTQ+ communities. Though it was started in 1969 in the United States, the moment has grown and become a global symbol of celebrating and accepting identities. This June, let’s look back at the history and relevance of Pride Month.

Also Read: From Begging On Trains To Being A Photojournalist, Here’s How This Transgender Person Carved Her Path

On June 28, 1969, police raided Stonewall Inn, the most popular gay bar in the New York city, on the pretext of operating without a liquor license. According to media reports, until 1966, throughout the state, it was illegal to serve alcohol to a gay person. Raiding gay bars was a part of the routine for the police and fighting back was a regular response of the LGBTQ+ community. But, this time, word of the Stonewall raid spread quickly throughout the city. By that evening (June 28), thousands of people including patrons of the Stonewall and other locals got involved and fought back the police brutality for six days.

It was the first to get major media coverage, and it sparked the formation of many gay rights groups. The series of events came to be known as Stonewall Riots; today, also known as the Stonewall uprising, Stonewall rebellion, or simply Stonewall.

Also Read: Leaving No One Behind: ‘Bambai Nazariya’, A Cafe In Mumbai Run By Transgender People With An Aim To Promote Inclusivity

The Significance Of Pride Month

The first Pride march was held on June 28, 1970, on the one-year anniversary of the Stonewall Uprising. The information available on the Library of Congress’ website states,

By all estimates, there were three to five thousand marchers at the inaugural Pride in New York City, and today marchers in New York City number in the millions. Since 1970, LGBTQ+ people have continued to gather together in June to march with Pride and demonstrate for equal rights.

In 2013, President Barack Obama cited Stonewall in his inaugural address, marking the first time in history that LGBTQ+ rights had been mentioned. He said,

Our journey is not complete until our gay brothers and sisters are treated like anyone else under the law. For if we are truly created equal, then surely the love we commit to one another must be equal as well.

What Does LGBTQ+ Stand For?

LGBTQ stands for lesbian, gay, bisexual, transgender, and queer. The plus at the end represents other sexual identities including pansexual, two-spirit, asexual, and ally.

The impact of increased protests and firm voices of the LGBTQ+ community across the world has been seen in India. On 6 September, 2018 the Supreme Court decriminalised homosexuality and overruled its own 2013 decision and partially struck down Section 377, a controversial British-era law that banned consensual gay sex. The ban is irrational, indefensible and manifestly arbitrary, the judges said.

“We have to bid adieu to prejudices and empower all citizens,” said Chief Justice Misra, reading out what he said was a consensus judgment. The judges also said:

Any discrimination on the basis of sexuality amounts to a violation of fundamental rights.

The historic judgment acknowledged their struggle as it noted “158 years ago, the law deprived people of love.” The judges said:

Respect for individual choice is the essence of liberty; LGBT community possesses equal rights under the constitution.

Related Topics:
Leaving No One Behind Pride Month
Up Next