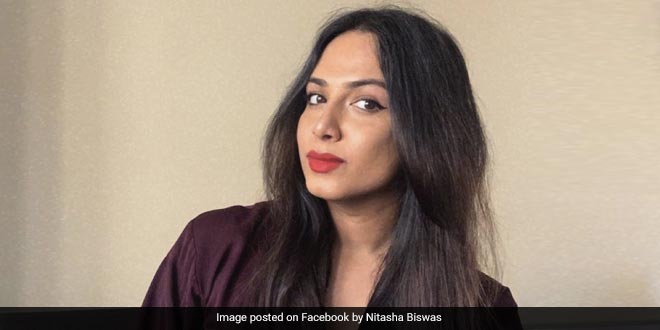 Nitasha Biswas, a trans model, beauty pageant winner and social media influencer said that her journey of becoming a woman from a man was a complex one a man

Kolkata: A model, beauty pageant winner and social media influencer, Nitasha Biswas knew her journey of becoming a woman from a man would be a complex one, with its share of mental and physical agony, but her spirited self did not let anything come in the way of “correcting the wrong”. Transgenders don’t have it easy anywhere, but the situation has improved over the years in India, with the Centre and some state governments taking certain proactive measures for their well-being, said activists on the occasion of International Transgender Day of Visibility.

Born Suvanko to a south Kolkata family, Ms Biswas would often raise eyebrows every time she put on her mother’s sari or jewellery.

It was difficult coming to terms with reality. Having lost my mother at a tender age, I felt all the more disoriented. I had no friends in school and the constant jeers by relatives and acquaintances made life worse. My father, a government officer, always wanted me to become a doctor or an engineer, much like my cousins. I knew my heart lay elsewhere. I wanted to pursue fashion. It was only after I moved to Delhi for higher studies, I could fulfil my dreams, the 30-year-old said.

Having undergone sex reassignment surgery with no one to stand by her, barring a friend, Ms Biswas finally felt “liberated”, and went on to win the first beauty pageant for transgenders in the country.

Some awareness generation and a beauty contest later, my relationship with my father has now improved a lot. I know of many other younger souls who are going through similar struggles, and I share my story with them to motivate them, she stated.

Simran Bharucha, the director for transgender health at project Accelerate of Johns Hopkins University School of Medicine, explained that doors and avenues have opened over the years, but not many have access to the benefits and services, which have been made available to them.

Some state governments are taking steps to bring about the much-desired change. In Odisha, the government is recruiting transgenders in the police force. Similar welfare measures are being initiated in other parts of the country. The Transgender Persons (Protection of Rights) Act, 2019, has also brought about some positive changes for the community, Simran Bharucha pointed out.

A trans person herself, she recalled that doctors would “refuse to touch her” when she was a child.

It was necessary to do something for providing healthcare facilities to the transgender population. And by health, I mean mental health, too. Keeping that in mind, clinics to attend to the transgenders have been opened in states like Maharashtra and Telangana, where their overall wellbeing is taken into account, she added.

In Kolkata, a group of activists has recently built a safe home for trans men and women, where they are provided basic facilities and skill-based training to find jobs.

At Garima Griha, supported by the central government, we currently have 25 residents, who live their lives with heads held high. There is still a long way to go… we plan to set up similar centres in the district, too, where transgenders are bullied and looked down upon. Often, we come across cases of torture and murder, too, in the villages. The situation might be slightly better in the cities but a large number of people are still transphobic, said Ranjita Sinha, a transwoman who had been fighting for the community’s equal rights.

Srabasti Majumder, a queer affirmative therapist, added that the younger generation is creating a difference as many of them are holding open discussions with their loved ones on sexual preferences and gender non-conformity.

Gender roles are stereotyped in our society. Latent family violence, relationship issues, concerns over livelihood are some of the major factors that affect the well-being of LGBTQ+ people. No one talks about preferences. With time and awareness generation, acceptance has increased but there is still a long way to go, Srabasti Majumder added.

Related Topics:
Leaving No One Behind West Bengal
Up Next

Leaving No One Behind: ‘Bambai Nazariya’, A Cafe In Mumbai Run By Transgender People With An Aim To Promote Inclusivity