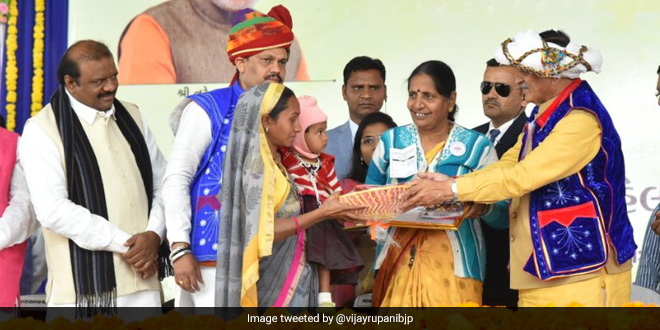 New Delhi: Home to more than 60 million people (5 percent of the population of India as per the population census of India 2011), Gujarat is one of India’s most urbanised states, with 43 percent of the population living in urban areas according to the state government. Yet, according to the report India: Health of the Nation’s States prepared by the Indian Council of Medical Research (ICMR), Public Health Foundation of India and Institute for Health Metrics and Evaluation, in 2016, child and maternal malnutrition accounted for most death and disability in Gujarat. As per the Lancet Global Health report, Gujarat was the eighth-worst performing state of India in terms of the burden of diseases pertaining to maternal and child undernutrition. To overcome these challenges and in a bid to make Gujarat one of a leader state in human development index and ensure and maintain nutrition levels of children, teenage girls, pregnant and lactating women in the state, Gujarat’s Chief Minister Vijay Rupani launched ‘Gujarat Poshan Abhiyan 2020-22’, a state-wide drive against malnutrition on January 23 from Dahod district.

Chief Minister Vijay Rupani expressed his resolve to make Gujarat a malnutrition-free state with this two-year nutrition campaign that will cover all the cities, towns and villages of the state. The official statement from the Chief Minister’s office said, “Gujarat will do its best to realise Prime Minister Narendra Modi’s nutrition campaign, which carries the slogan ‘Sahi Poshan-Desh Roshan’.

Thanking the Anganwadi workers, ASHA workers and Auxillary Nurse Midwives (ANM) for their joint work at over 50,000 anganwadis in the state to ensure best nutrition levels, Mr Rupani also announced cash rewards of Rs 12,000. He said,

The anganwadi which will help achieve the best results and will do their best to eradicate malnutrition in the coming years from the state, according to parameters and norms set as per third party assessment, will be awarded at the end of the year with a cash prize of Rs 12,000. Apart from their salaries, the anganwadi worker, ASHA worker and the ANM worker will each get this reward money.

Taking over social media to thank the work of anganwadi workers in the state, Mr Rupani said,

I sincerely appreciate zealous devotion of Anganwadi sisters who are working tirelessly for the bright and healthy future of Gujarat and helping to eradicate malnutrition from the state. Their efforts have raised new hope for children of the state.

I sincerely appreciate zealous devotion of Anganwadi sisters who are working tirelessly for the bright & healthy future of Gujarat by the way of eradicating malnutrition. Their efforts have raised new hope for children of the state. #GujaratPoshanAbhiyaan #Malnutrition pic.twitter.com/5H0WgV4tAP

No teenage girl should suffer from anaemia. If teenage girls are healthy, then the future will be healthy. They should get nutritious foods and any kind of deficiencies of iron, vitamins and other vital elements should be eradicated, Gujarat state will be determined to do so.

He further highlighted that to fight malnourishment in the state the Gujarat government will be increasing the budgetary allocation from Rs 400 crore.

Mr Rupani signed off by urging people Gujarat to take responsibility for making the state swasth and pusht. He said, “Take responsibility of one under-nourished child each and help Gujarat improve their nourishment level.”