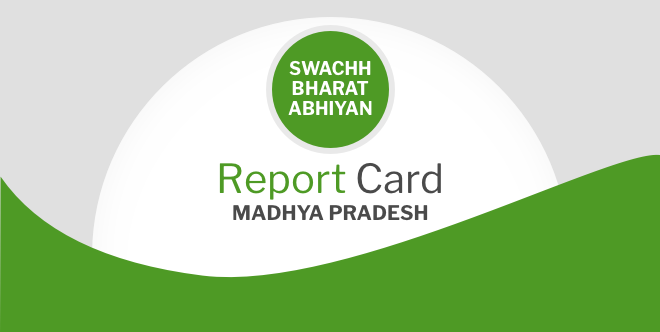 Mumbai: The third year of Swachh Bharat Abhiyan was a noteworthy year for Madhya Pradesh with its urban areas turning open defecation free (ODF) and eight of its cities featuring among top 25 cleanest cities in India, with Indore topping the charts at the cleanest city of India. Continuing its effort in terms of improving sanitation this year as well, the state will declare all its rural areas ODF on the fourth anniversary of Swachh Bharat Abhiyan on October 2. Madhya Pradesh will join states like Maharashtra, Haryana and Gujarat that have managed to ensure 100 per cent toilet access to both, rural and urban regions.

In a bid to achieve to the ODF title before the national deadline of October 2019, Chief Minister Shivraj Singh Chouhan had announced few months ago that the target has been pushed forward and all the rural areas in the state will be declared free from open defecation by October 2 this year.

We have decided, and we will make sure Madhya Pradesh is ODF by October 2. 87% toilets have been made in the state, we will build 11 lakh toilets more to achieve the open defecation free tag. I appeal to people of Madhya Pradesh – use toilets and do away with their habit of defecating in the open. We all need to take this oath of making our state free from open defecation by this year, the Chief Minister had said in May this year. 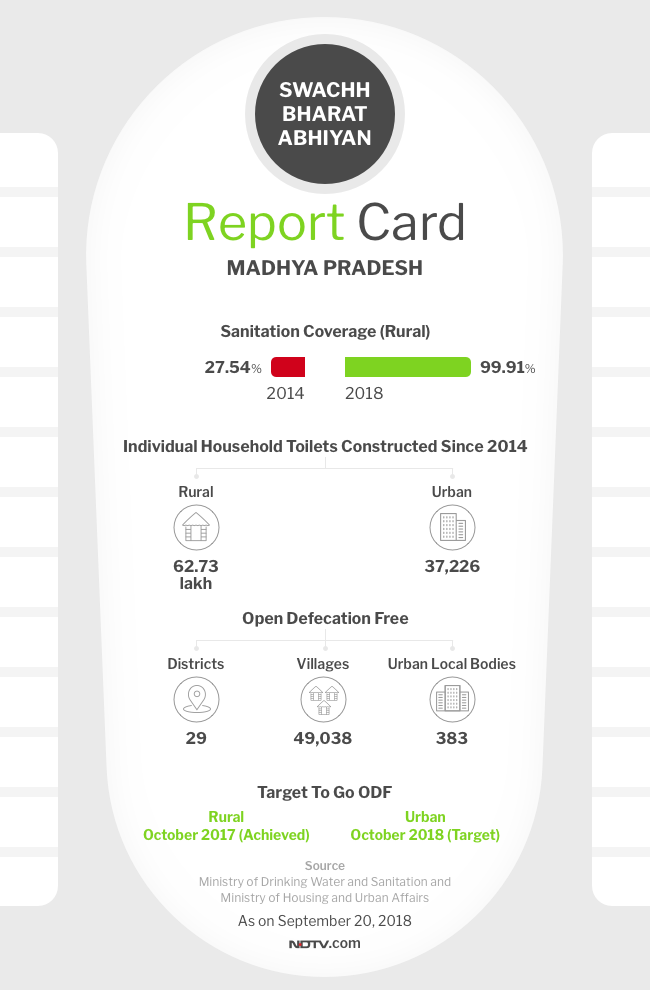 We had appointed NGOs and Self-Help Groups (SHGs) that served as a link between people and government authorities. Applying for a subsidy to construct a toilet is a long process and many people in rural areas were demotivated by it in the beginning. Thus, we let people choose the mode of building a toilet. Either they could directly apply for the subsidy or approach local organisations for the same. The entire process was a collective effort and it will be until we declare our region ODF.

The model of collective efforts was inspired from Narsinghpur, which was the first district in the state to achieve the ODF status. In March 2017, only 31 per cent of the people living in 1050 villages, 446 Gram Panchayats and 6 blocks in the district had access to toilet. Under the leadership of Pratibha Pal, CEO of the Zilla Panchayat, women, children and workers of Anganwadi and Association for Social and Health Advancement (ASHA) came forward to mobilise people and speed up the toilet construction process. 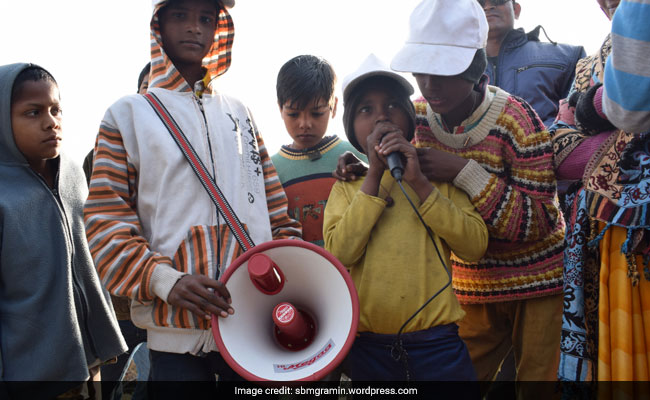 Children formed sanitation squads to stop people from defecating in the open. They would whistle every time they would spot someone relieving in the open. Women convinced their families and neighbours to build toilets by focusing on the health and hygiene advantages. The anganwadis and NGO workers worked towards sustaining the process and the authorities constructed the toilets. With each department playing a specific role, the district was declared ODF within three months.

Similar strategies were adopted by authorities in other parts of the state. For instance, children in Delmi village of Dhar district are turning out to be a valuable asset in sustaining the ODF tag. Being a part of sanitation committee, whenever they spot anyone defecating in the open they directly report it to the heads of panchayat who then take action against the defaulters.

Here's a glimpse of some of great work happening in Delmi village in Dhar district, #MadhyaPradesh
The village was declared ODF in 2015 and has since been maintaining their #ODF status with great pride and dedication. pic.twitter.com/3S175msWL2

— Swachh Bharat I #AzadiKaAmritMahotsav (@swachhbharat) May 10, 2018

While children in Narsinghpur and Dhar are leading the sanitation movement, it is the newly wedded couples that are setting an example in the Chitrangi block of Singrauli district. Inspired by the swachhta movement, 155 couples instead of traditional seven took eight pheras (circumambulate) around the sacred fire in a mass wedding organised this year in May. The eighth vow was made in the name of Swachhta with the bridegroom promising to ensure that a toilet is built in his home within 3-4 days before taking his new bride home. 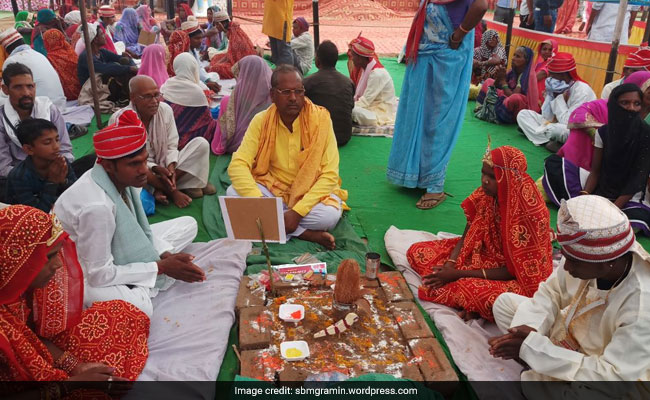 This type of innovative idea will not only boost the Swachh Bharat Mission Gramin campaign but also make sure that people will give due priority to sanitation during all occasions.

Also Read: In This Village Of Madhya Pradesh, The Panchayat Has Fined A Family Rs 75,000 For Defecating In The Open

Villages in Madhya Pradesh are filled with such examples and it is these very simple efforts and promises that has led to an increase in sanitation coverage from mere 27.54 per cent in 2014 to 99 per cent in 2018. There are a total of 52 districts of which 29 have been conferred the ODF certificate by the Quality Council of India (QCI). 49,038 villages out of 51,929 have declared themselves ODF. Barring eight or nine districts, the sanitation coverage in rest of them is above 90 per cent as per the data mentioned on the portal of Ministry of Drinking Water and Sanitation. Since 2014, over 62 lakh (62,73,220) toilets have been constructed in rural areas of the state. 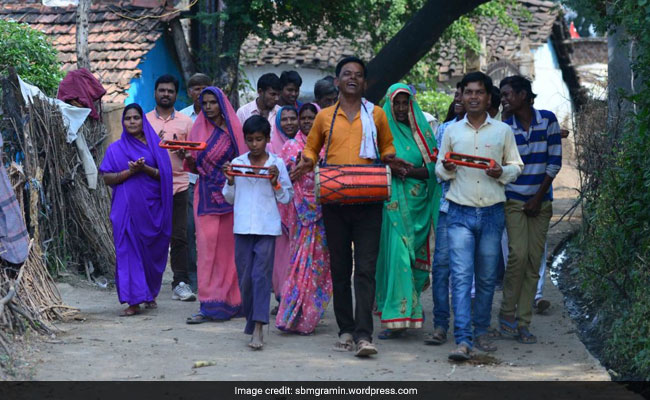 From organising rallies, competitions, workshops, games around the theme of Swachh Bharat Abhiyan to imposing fines and penalties, the local panchayats are doing everything to declare the state ODF on Rashtriya Swachhta Diwas this October 2.

Just a day after urban areas in Madhya Pradesh were declared free from open defecation on October 2 2017, the work towards enhancing all community and public toilets and liquid and solid waste management under the ODF-Plus process began. The state got its first ever community toilet for transgender people in Mangalwara area of Bhopal. While inaugurating the toilet, Chief Minister, Shivraj Singh Chouhan gave out a simple message of ensuring sanitation for all.

One of the criteria under ODF plus status is to have enough public or community toilets so that open defecation can be eliminated. Urban areas in the state have 2,552 community and public toilets. Talking about the importance of public toilets, Nilesh Dubey, Swachh Bharat Mission-Urban official says,

Unlike in rural areas, most of the houses in urban area are equipped with a toilet. The main problem of open defecation stems in slum areas and from the migrating population. Lack of space prevents slum dwellers from constructing a toilet. And often slum dwellers cannot afford pay-and-use toilets. In such cases, community toilets are necessary.

While the community toilets are preventing open defecation by slum dwellers in major cities like Bhopal, Indore and Jabalpur, the migrating population is still a problem for many civic bodies. As a solution, civic bodies are now asking companies that hire the migrating workers create a provision for a toilet first.

All 383 urban local bodies – 18 municipal corporations, 99 municipalities, 260 Nagar Panchayats and six cantonments were declared open defecation free last year on October 2, the birth anniversary of Mahatma Gandhi. 37,226 toilets have been constructed since 2014. The sustenance of using toilets has been impressive in the state as no open defecation instances were recorded by the QCI in their second and third round of verifications.