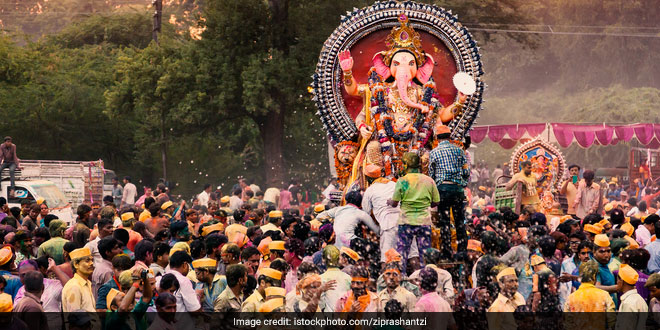 Mumbai: End of the Ganesh Chaturthi festival normally leaves behind glaring images of heaps of garbage and carcasses of immersed idols floating in water bodies, waste that is mostly non-biodegradable and damaging for the eco-system. But this year in Pune, the Mula-Mutha river breathed easy as tonnes of waste was prevented from making its way into the river at the end of the Ganesh festival. Taking on the challenge to keep Pune’s Mula-Mutha river free from waste during the ten-day Ganpati festival, citizens came forward and made a conscious choice of not immersing the idols along with the decorations in the river.

Led by the Solid Waste Collection and Handling (SWaCH), a ragpicker’s cooperative, ‘Nirmalaya Swachh River’ initiative was successful in protecting the river by diverting over 33,000 idols, nearly 97 tonnes of nirmalaya (immersion wastes like flowers, leaves, decorations, etc.) and 24 tonnes of dry waste. While the nirmalaya was taken to a composting facility, the dry waste was sorted by the ragpickers and then sold to the local scrap dealers, the idols were immersed in artificial tanks placed on the river banks. 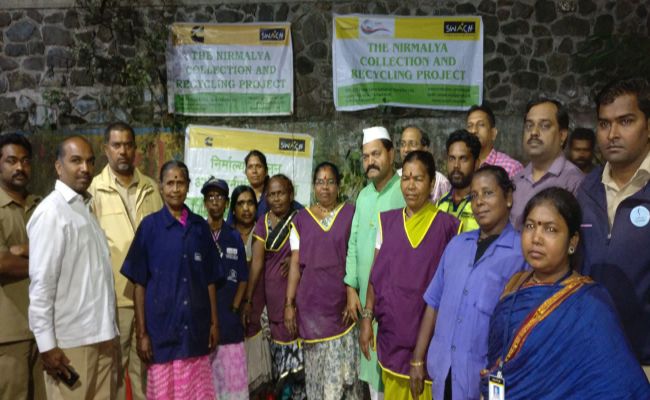 ‘Nirmalaya Swachh River’ initiative was led by the Solid Waste Collection and Handling (SWaCH), a ragpicker’s cooperative in Pune

We have learnt from our past experiences and the citizens also have become more aware says Shobha Bansode a SWaCH member who has been involved in the drive at the ghats for several years now.

Like every year, the waste picker’s cooperative adopted 18 ghats and invited citizens to join the cleanup drive.

Every year is a learning experience, echoes Priya Kathuria, Operations and Events Head at SwaCH.

The city is growing, but so is the awareness among the citizens. Those who come for visarjan (immersion) expect SWaCH waste-pickers at the ghats and the event which helps divert and dispose of Nirmalya from the rivers has also succeeded at creating awareness in its own way.

Nearly 150 ragpickers and hundreds of citizens participated on both the days of the drive (September 17 and 23). With the help of social media, the contact details of coordinators stationed at each ghat were given to the citizens in advance to smoothen the process.

On both the days, teams started the cleanliness drive from 9 am and it went on till midnight. Volunteers and waste pickers were appealing to the people who visited the ghat to immerse the idols to keep aside the nirmalaya before the immersion. Huge buckets and bags were provided to discard the flower and other kinds of waste. At the end of the day, all the waste from 18 ghats was transported to a composting facility at Bhugaon by sanitation workers of the Pune Municipal Corporation (PMC).

Since last three years we are converting nirmalya into compost with the help of GoVidnyan organisation and distributing it to farmers. This time we have also approached 40 societies and collected nirmlaya directly from them to convert it into compost and also created awareness and Ganesh idol making workshop in schools. Every year all our volunteers passionately work alongside SWaCH and PMC to convey the message of restricting water pollution, said an official spokesperson from Cummins India Limited, who sponsored the event.

Besides convincing the devotees to refrain from throwing their waste into the river, the ragpickers and volunteers also encouraged people to immerse their idols into the tanks provided by the PMC to avoid polluting the river. A total of 33,730 idols were immersed in the tanks. Post immersion in the artificial tanks, ammonium bicarbonate, an inorganic compound was added. The final product ammonium sulfate, which is an excellent soil fertilizer, will now be used in public gardens.

33,730 idols were immersed in the artificial tanks

River activist Shailaja Deshpande of ‘Jeevit Nadi’ was also present at the event to educate people about how immersing idols, made from Plaster of Paris, endanger the marine animals and pollute the water bodies.

People these days are aware about conservation of environment. Almost 90% families agreed to immerse the idol in the tank and almost everyone handed over the nirmalya to us. With several years’ experience in doing this, the SWaCH team was very organised and ready for the crowds. Many people were appreciative of the facility provided and offered prasad to the staff and volunteers after the immersion. With active participation by more citizens (in volunteering), I am optimistic that we will be able to gradually keep our rivers clean, said Ms Deshpande.

Started in the year 2008, the ‘Swachh Nirmalaya Mission’ has now turned into a mass movement where residents of Pune come together and celebrate an eco-friendly Ganapati festival. In their first year, 12 tonnes of garbage was diverted from the river. Over the years, with more and more households getting Ganpati idols at home, the waste generation has also increased and last year a whopping 140 tonnes of waste was saved from being discarded into the river.

In Maharashtra’s Melghat, Malnutrition Continues To Pose A Mortal Threat To Children