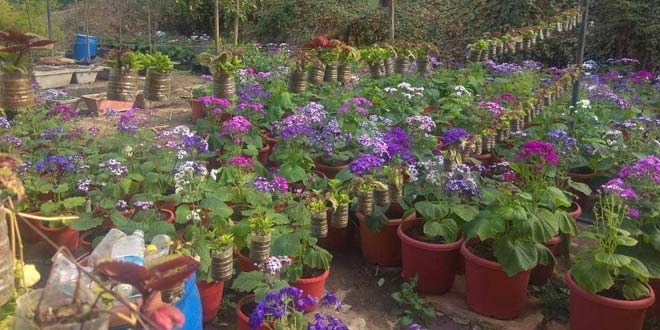 Mumbai: Globally, humans consume a million plastic bottles every minute according to the consumer market research company Euromonitor International. It is estimated that over half a trillion plastic bottles will be sold in 2020. Plastic bottles are commonly made from polyethylene terephthalate (PET). These take approximately 400 years to decompose but are highly recyclable. Banking on the long shelf life of plastic bottles, India’s cleanest city for two years in a row in Swachh Survekshan (cleanliness survey), Indore has developed a vertical garden using discarded bottles. The idea was conceptualised by the Garden department of Indore Municipal Corporation (IMC). The civic body will collect the discarded bottles from government events and meetings.

The vertical garden has been installed at Nehru Park, one of the popular parks in the city. Around 2,000 bottles were used in place of nursery growing containers.

Explaining the purpose behind installing the garden in the park, Mr Joshi says,

Vertical gardens made with the help of plastic bottles occupy less space and the cost of buying containers is eliminated. They are also easy to make, and anyone can build such gardens at home. Placing them in Nehru park will attract maximum people towards the concept of vertical gardens. We want people to reuse the bottles at their home and in neighbourhood and increase the green cover. This will lessen the air and plastic pollution, says Mr Joshi.

Cut the bottle in half. Use the bottom half and poke small holes in the bottom of it for drainage. Cut a rectangle in the middle of your bottle opposite the side with holes. This is an opening for your soil and seedlings. Thread the string through a hole and pull out through the other for hanging purpose. Select plants on the basis of location that is indoor or outdoor and the amount of sunlight the wall gets.

The benefits of having a vertical garden are multiple. It tackles air pollution by eliminating ultra-fine dust pollutants that can easily enter a human body that lead to several health problems. Besides, the green walls also absorb the heat and bringdown the temperature by 2-3 degrees. It also helps in reducing the noise levels.

If the concept of vertical gardening by reusing plastic bottles is successful in Nehru park then the IMC will develop such gardens in other public places as well, said Mr Joshi.

The concept of vertical gardening has already been tested in Noida, Delhi, Bengaluru. The Kochi Metro was the first among the Metrorail corporations to adopt this initiative and build vertical gardens in January 2017. Taking cue from Kochi was Bengaluru’s Namma Metro, Nagpur’s Mahametro and Delhi’s Metro Corporation.