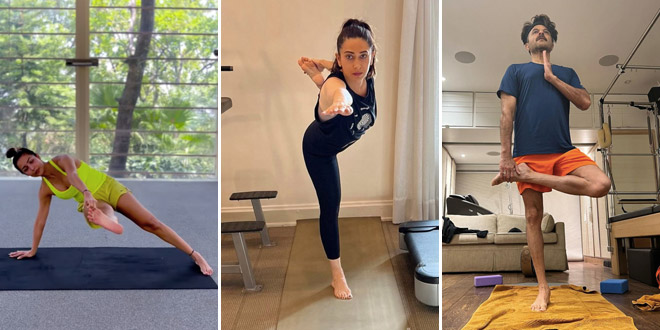 New Delhi: As we marked June 21 as International Day of Yoga (IDY) with the theme ‘Yoga For Humanity’, here’s a look at how B-town celebs celebrated the occasion. Several celebs took to their social media and marked the day in their favourite asanas with a hope they can inspire their followers to adopt Yoga as part of their lifestyle.

Actor and Yogi Malaika Arora shared a small video with the followers and urged them to simply just start their healthy routine by practising Yoga, she said, “For me, it’s another day. For me, this is a way of life. However, all I ask you is #juststart. Happy international day of yoga.”

Actor Kareena Kapoor Khan shared an adorable picture of her son Jeh in one of the Yoga poses and said, “Balance such an important word to life and Yoga. Happy international Yoga Day people.”

Actor Karisma Kapoor said that Yoga is like music for her. Sharing a photo of herself doing one of the Yoga asanas on her social media she said, “ Yoga is Like Music. The Rhythm of the Body, The Melody of the Mind, The Harmony of the soul.????????‍♀️ Happy International Yoga Day !”

Actor Anil Kapoor shared snippets of himself doing different yoga asanas and said that everyone should do some form of yoga everyday. He added, “Celebrating World Yoga Day! For a happy & healthy mind! This is my advice so you can also #jugjuggjeeyo”

In a long note, Fashion designer-actress Masaba Gupta spoke of her love for yoga. She said, “My time on the mat is sacred. And I’ve been trying to do this Asana for two years and here we are. Not even close to perfect but baby steps. The Bakasana (Crow or Crane Pose ) for me is a lesson in confidence and overcoming fear. Trusting your own strength, your core & arms and that you will not fall flat on your face. I love yoga for what it does not just to your body but also your mind. Happy International Yoga Day! What’s the one asana you want to be able to do this year?”

Actress Shama Sikander shared a series of photos of herself doing different poses of Yoga and said, “Definition of Yoga. Yoga is a physical, mental and spiritual practice that originated in ancient India. The word yoga is derived from the Sanskrit root yuj, meaning “to yoke,” or “to unite”. The practice aims to create union between body, mind and spirit, as well as between the individual self and universal consciousness. Such a union tends to neutralize ego-driven thoughts and behaviours, creating a sense of spiritual awakening. International yoga divas par aap sabko mera shat shat pranam.”

Also Read: International Yoga Day 2022: The Importance Of Yoga For The Mind, Body and Soul

About International Day Of Yoga

June 21 is celebrated as International Day of Yoga (IDY) across the globe since 2015, following its inception in the United Nations General Assembly in 2014, as the UN noted the numerous benefits of practising yoga regularly. This date was picked as the day to mark Yoga Day as per Prime Minister Narendra Modi’s suggestion at the UN, explaining that it is the longest day of the year. This year, in India, Prime Minister Narendra Modi led a mass Yoga event at the Mysuru Palace grounds in Karnataka to celebrate the International Day of Yoga. PM Modi joined 15,000 yoga enthusiasts who participated in the event.