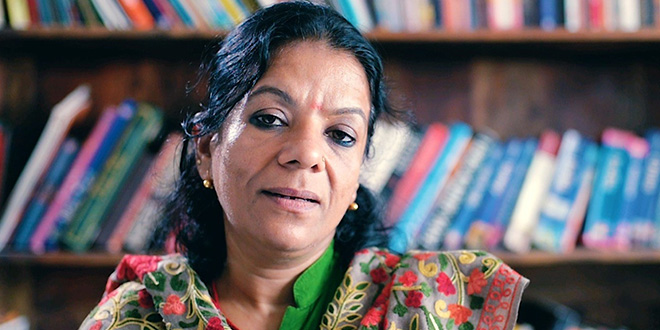 This World AIDS Day, meet one of the HIV warriors, Mona Balani

New Delhi: ‘Ma’am, how did you get HIV at a young age?’, ‘What kind of places your husband used to visit?’, ‘What type of women your husband used to meet?’ These are the kind of questions Mona Balani, a 45-year-old HIV-positive woman would face, every time she would go out for treatment. “My blood would boil. I wanted people to understand that unsafe sex is not the only way HIV is transmitted,” says Ms Balani, HIV/TB activist, currently based in Delhi.

HIV (Human Immunodeficiency Virus) targets the auto immunity of the person. Both Ms Balani and her husband were diagnosed with HIV in 1999 and back then, the disease was directly linked to a person having a ‘loose character’ which is why the couple didn’t inform anyone about their HIV status for two years. It is only when Ms Balani’s husband started falling sick frequently and was admitted to the hospital on a regular basis, they broke the news.

In the 90s, HIV meant AIDS which was equated with death. The reaction of our families was obviously not positive. Slowly they cut all ties with us and our interaction and get-together reduced drastically. But I went on to educate myself and my husband about the disease. We learned that HIV isn’t transmitted by touching, living together or sharing clothes and toilet, recalls Ms Balani, originally born in Jaipur, Rajasthan.

The World Health Organisation (WHO) states that HIV disease can be managed by treatment regimens composed of a combination of three or more antiretroviral (ARV) drugs. However, back in the 90s, HIV treatment was at a nascent stage, says Ms Balani. She adds,

Only a handful of private practitioners were providing treatment which was quite expensive. During the process, my husband got multiple TB (Tuberculosis) infections in various parts of the body. We lost all our assets on diagnosis and treatment. We did get support from the state government; Rs. 20,000 a month was disbursed to people living with HIV (PLHIV) for a period of six months.

The duo couldn’t afford the HIV treatment for both so collectively they decided to provide for Ms Balani’s husband. Hence, the relief fund that she used to get from the government was utilised in purchasing medicines for her husband who breathed his last on May 26, 2005.

CD4 count is used to measure the robustness of the immune system. Back then, my CD4 count was 950 against the minimum 500 and I didn’t face any critical illness so I avoided ART. However, in 2004, I contracted lung TB and later in 2006, I got abdominal TB. Soon, my health deteriorated; CD4 count dropped down to 33 and I was reduced to bones, weighing 30kgs. I lost appetite and had constant diarrhoea, says Ms Balani.

One day, in 2006, physically weak, Ms Balani had gone to a DOT centre for TB medicines where she fainted and was carried home, the reason cited was, ‘she should spend the last few hours of her life at home’. Ms Balani had a low pulse rate and was breathing heavily. Recounting that day, she says,

My family laid me down on the ground and started preparing for the last rites. But my 6-year-old son’s words gave me the second lease of life. He hugged me and said, ‘Dad has already left me. Now you too must not leave my side.’

After her husband’s death due to HIV, Ms Balani started working as a receptionist at a private firm to make ends meet. In 2006, she started ART at SMS Hospital in Jaipur. Through a colleague, she got introduced to Rajasthan Network Of People Living With HIV and joined the organisation as a peer counsellor.

When I used to go for ART and see people in the queue, hiding their faces, not talking to anyone, I would wonder ‘why should we hide? We should be sharing our experiences.’ I would try to strike a conversation with people but only a few would respond. After joining the NGO, we went to almost every village to create awareness especially among women who wouldn’t come out. The local community support became my support because of which I am here. Then I joined Positive Women Network in Rajasthan. In 2013 I moved to Delhi and started working as a consultant at India HIV/AIDS Alliance, shares Ms Balani.

Parallely, in 2010, Ms Balani along with fellow senior HIV advocates had started the National Coalition of People Living with HIV in India (NCPI+) on a small scale. One of the objectives of the network is to ensure and advocate for quality care, support and treatment services with dignity, free from stigma and discrimination in the public and private sector for PLHIV and affected communities.

Gradually, the coalition grew and today it is present in 13 states; 14 lakh people are associated with us. I officially joined NCPI as a project director. We provide all kinds of support to PLHIV. For example, a man from Delhi required dental treatment as his jaw was infected due to a fungal infection in the mouth. He was denied treatment at various private hospitals due to HIV. He was the sole breadwinner of the family until his humble tea shop got shut due to the COVID-19. He connected with us and we ensured not only treatment but also provided for a computer course for his older son so that he could work, says Ms Bilani.

The HIV activist faced both stigma and violation in the early years but she didn’t get bogged down by the disease or people. She believes that in over four decades, information, communication and education (ICE) programmes by the government and first-hand experience of PLHIV have changed the face of HIV in the country. The HIV/AIDS Prevention Act is a result of the same. The Act aims to prevent and control the spread of HIV and AIDS in the country and provides for penalties for discrimination against those affected by the virus.

We have to continue to address the stigma and strengthen the community support system. We need to educate people about the HIV/AIDS Act so that they are aware of their rights and work towards their protection. People can become strong pillars of the government, says Ms Bilani.

World AIDS Day 2021: How To Prevent Mother-To-Child Transmission Of HIV?