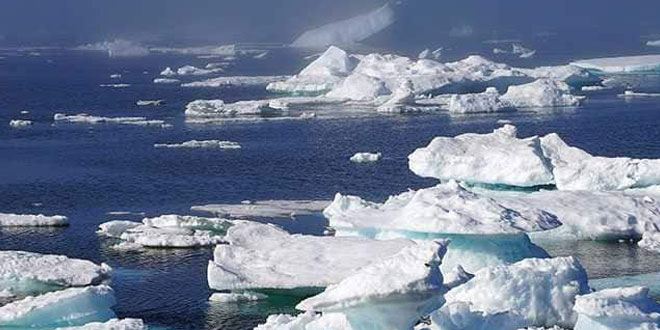 London: Tiny pieces of plastic have been found in ice cores drilled in the Arctic by a U.S.-led team of scientists, underscoring the threat the growing form of pollution poses to marine life in even the remotest waters on the planet. The researchers used a helicopter to land on ice floes and retrieve the samples during an 18-day icebreaker expedition through the Northwest Passage, the hazardous route linking the Pacific and Atlantic oceans. Jacob Strock, a graduate student researcher at the University of Rhode Island, who conducted an initial on-board analysis of the cores said,

We had spent weeks looking out at what looks so much like pristine white sea ice floating out on the ocean.

“When we look at it up close and we see that it’s all very, very visibly contaminated when you look at it with the right tools – it felt a little bit like a punch in the gut,” Mr. Strock told Reuters by telephone on Wednesday.

Mr. Strock and his colleagues found the material trapped in ice taken from Lancaster Sound, an isolated stretch of water in the Canadian Arctic, which they had assumed might be relatively sheltered from drifting plastic pollution.

The team drew 18 ice cores of up to 2 meters (6.5 feet) long from four locations and saw visible plastic beads and filaments of various shapes and sizes. Brice Loose, an oceanographer at the University of Rhode Island and chief scientist of the expedition, known as the Northwest Passage Project said, “The plastic just jumped out in both its abundance and its scale.”

The scientists’ dismay is reminiscent of the consternation felt by explorers who found plastic waste in the Pacific Ocean’s Marianas Trench, the deepest place on Earth, during submarine dives earlier this year.

The Northwest Passage Project is primarily focused on investigating the impact of manmade climate change on the Arctic, whose role as the planet’s cooling system is being compromised by the rapid vanishing of summer sea ice.

But the plastic fragments – known as microplastic – also served to highlight how the waste problem has reached epidemic proportions. The United Nations estimates that 100 million tons of plastic have been dumped in the oceans to date.

The researchers said the ice they sampled appeared to be at least a year old and had probably drifted into Lancaster Sound from more central regions of the Arctic.

The team plans to subject the samples to further analysis to support a broader research effort to understand the damage plastic is doing to fish, seabirds and large ocean mammals such as whales.

Funded by the National Science Foundation and the Heising-Simons Foundation in the United States, the expedition in the Swedish icebreaker The Oden ran from July 18 to Aug. 4 and covered some 2,000 nautical miles.

Separately, German and Swiss scientists published a study on Wednesday based on samples from the Arctic, Swiss Alps and Germany that suggested microplastic is being blown vast distances through the air and dumped when it snows.

The team from the Helmholtz Centre for Polar and Marine Research found that snow collected on the Norwegian Arctic archipelago of Svalbard contained up to 14,400 particles of plastic per liter. The study found its highest concentration of particles – 154,000 particles per liter – near a rural road in the German federal state of Bavaria.

Melanie Bergmann, a marine ecologist who co-led the research, published in Science Advances (here: https://bit.ly/2MiksfY), said much of the large amounts of microplastic found in the Arctic in previous studies had probably been carried there through the atmosphere.

“Once we’ve determined that large quantities of microplastic can also be transported by the air, it naturally raises the question as to whether and how much plastic we’re inhaling,” Bergmann said in a statement.