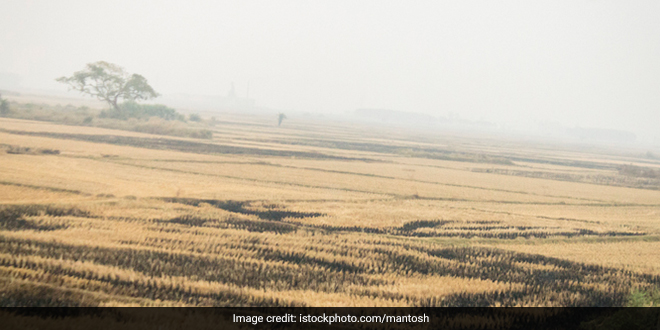 On Friday (November 11), Punjab witnessed 3,916 farm fires -– the highest so far this season

Chandigarh: In another major hike in stubble burning incidents, Punjab on Friday (November 11) witnessed 3,916 farm fires -– the highest so far this season. Meanwhile, the state government said stubble burning cases had come down by about 30 per cent as compared to last year. With the fresh addition, the total number of farm fire incidents recorded between September 15 and November 11 rose to 40,677, according to Ludhiana-based Punjab Remote Sensing Centre data. This is 27 per cent less when compared to 55,573 crop residue incidents reported in the corresponding period last year, as per the data.

The state had reported 69,333 such incidents during the same period in 2020, according to the data.

Despite complaints from neighbouring states, including Delhi, farmers continue to set crop residue on fire in order to clear fields for sowing the next crops, mostly wheat and vegetables.

The state government issued a statement crediting itself for the reduction in farm fires, attributing it to various initiatives it took to curb the practice.

Chairing a meeting with the officials, Punjab Chief Secretary Vijay Kumar Janjua directed them to encourage farmers not to burn stubble, according to an official release.

During the meeting, the deputy commissioners claimed that every fire incident shown by the satellite system is not correct.

They said that the straw baling has been done on a large scale in the state and even at farms where small incidents of fire happened after baling were reported as full cases of fire incidents.

During the meeting, the chief secretary issued directions to the agriculture department to ensure that the money for the subsidised machinery is sent into the accounts of beneficiaries by November 30.

On the other hand, the Haryana government said that in the last 24 hours, a very few incidents of stubble burning were reported in state, terming the development a success of its efforts.

An official spokesperson said the incidents of stubble burning in Haryana have come down by 25 per cent this year, and countered Punjab’s claim saying that the state has seen a 20 per cent increase in farm fire incidents.

The spokesperson attributed the reduction to the state government’s awareness campaign and incentive of Rs 1,000 per acre offered to farmers, as well as other initiatives.

He said that Rs 50 per quintal in incentive and subsidy on straw management equipment is also being given to the farmers for making stubble bales.

He also said if any farmer takes the stubble bales to ethanol plants set up in Karnal and Panipat, he is given an incentive of Rs 2,000 per acre.

Not only this, the government also gives up to 10 lakh to a panchayat for not burning stubble in the red zone area, said the official.

The state government has given more than 72,000 machines to farmers for crop residue management, he added.

Related Topics:
Pollution punjab
Up Next