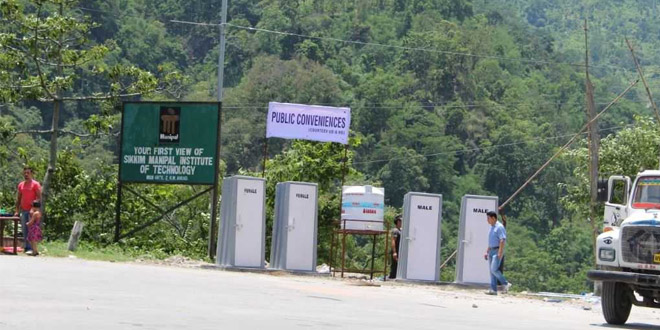 New Delhi: A small state with its people living in tough mountainous terrain (enclosed on three sides by lofty mountain ranges of Himalayas), here’s how Sikkim has emerged as one of India’s leading example of environmental causes implemented right. Sikkim’s tryst with open defecation free status pre-dates the Swachh Bharat Abhiyan. The state became one of the first in the country to attain open defecation free status for its rural pollution 10 years ago. The state government as part of its Total Sanitation Campaign launched in 1998, collaborated with people to construct toilets using local materials. And, together they maintained a strict resilience against the relapse of bad practices of open defecation. The government even made it mandatory to have a toilet at home to be eligible for any benefits from the government or to contest in village-level elections.

The Sikkimese culture has generally been against open defecation. Many people used toilets made of bamboo structures instead of defecating in the open, before the government launched its initiative in 1998. “We have always been laying emphasis on a ‘Clean and Green Sikkim’, which has now become a brand name for the State, said D.R. Nepal, Secretary, Rural Management and Development Department, Government of Sikkim.

With open defecation in its rural areas eradicated in 2008, Sikkim’s urban areas took 10 years to become ODF on April 18, 2018. All 53 urban local bodies in the hilly state were declared ODF post the construction of over 70 public and community toilets as part of the Swachh Bharat Abhiyan.

Improvement of urban sanitation was prioritiesed by the state government in 2014 and with the beginning of the Swachh Bharat Abhiyan, the movement gained impetus as the work of urban local bodies was duly supported by the Abhiyan.

For Sikkim, sanitation in urban areas was a bigger problem than in rural areas, as rural sanitation had already improved to high levels. In urban areas, many ULBs did not have adequate funds to build or maintain toilets and would earlier show reluctance. With the Swachh Bharat Abhiyan’s assistance the tide has turned towards urban sanitation in the last four years in Sikkim, said Tsewang G Bhutia, Sanitation Consultant, Swachh Bharat Urban, Sikkim.

Often praised for being the cleanest state in India (adjudged by National Sample Survey Office), Sikkim, nestled in the Himalayas in northeastern India, apart from being a pioneer in the field of sanitation is also a leader in terms of making the state plastic free. When it comes to green policies, Sikkim is a state with many firsts. In 1998, the tiny hill state became the first Indian state to ban non-biodegradable materials like plastics, polythene bags through legislation. In 2016, it also restricted the use of mineral water bottles in government events and banned the use of food containers made from foam, all over the state.

And to cut down on the disposable plastic garbage that gets generated in huge numbers and adds to the burden of the landfills, the State government in 2016 restricted the use of mineral water bottles in government programmes and banned the use of foam food containers all over the state. The order banned the use and sale of disposable items such as cups, plates, spoons, containers, etc made from foam throughout the state with immediate effect.

Talking about why Sikkim is so concerned about curbing the plastic garage, an official from the state pollution control department said:

In the mountains, both tourists and locals end up dumping the plastic waste which is hazardous so we took this step. Since, Sikkim is a small and bio-diversity rich area, there’s not much space where the state pollution control board can setup a garbage dump. The state has already stretched its limit to use land for garbage dump and processing. Opting for new landfill sites is neither a viable option nor permissible as it would require taking over forest land.

“There is a huge awareness among people about not using plastic carry bags, which is why the state has managed to become the cleanest state,” added an official of the pollution control board.

In terms of the amount of waste generation, Sikkim’s capital city Gangtok generates approximately 390 kilograms per capita per day waste, which calculates to roughly 30-35 metric tonnes of waste per day, which goes up to 40-45 metric tonnes a day during the tourist season. This includes all types of wastes such as domestic waste, commercial waste, construction and demolition waste, market waste, street sweepings etc.

In 2014, the government prohibited the manufacture, sale and use or bursting of all types of firecracker including any sound emitting or illuminating type of firecrackers within the state. Sikkim has also prohibited the burning of agricultural waste, leaves, litter, paper wastes and garbage. This prohibition, however, DOES not cover the use of processed agricultural wastes, leaf litter, and garbage as fuel and controlled burning of forest litter for the purpose of scientific management of forest fires.

The state government also encourages the people to use alternative sources of energy for heating and cooking purposes.

Understanding that freshwater is a finite natural resource, and glaciers, rivers and springs form an important component of the surface water resources, the State Pollution Control Board regularly monitors the nature and extent of water quality degradations and the existing quality of water in the water bodies. Through its green policies, the government has ensured that the water sources don’t get polluted.

How Sikkim Prevented The Pollution Of Soil And Water Resources

By controlling the use of chemical pesticides and insecticides to prevent pollution of soil and water resources, the tiny hill state became the first organic state of India. It all started back in 2003 when the government took this decision to shun the usage of chemicals for farming purposes through a declaration in the legislative assembly. Over the years around 75,000 hectares of land has been converted into certified organic farms following the guidelines as prescribed by National Programme for Organic Production.

Through penalties, state-level policies and a mass awareness programme, this landlocked state nestled in Himalayas is a perfect example of how continuous efforts from both the government and the people can work in-sync with the environment and ensure its protection

Maharashtra Plastic Ban: How Has Life Changed In The State Post The Ban On Plastic

One Lakh Kilometres Of Roads In India Are Being Made From Plastic Waste, Is This The Solution To End Plastic Crisis?