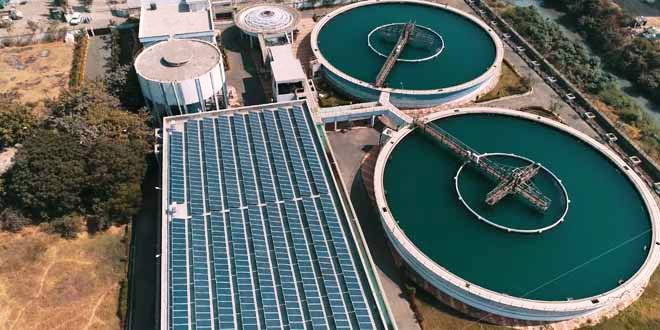 New Delhi: Surat Municipal Corporation (SMC) recently became a successful example of a smart India as it gets a tag of India’s first city generating the maximum amount of renewable energy in the country and cutting its dependence on the conventional thermal power. It all started in the year 2012, when Surat commenced the production of renewable energy by installing 100 Kilo Watt (kW) solar panel atop the Science Centre in the city which was taking care of a tiny part of the city’s electricity need. In 2013, the city got its Solar City Master Plan which was prepared by the Ministry of New and Renewable Energy (MNRE) that helped in expanding the solar capacity to about 5 Mega Watts (MW), wind capacity to about 30.3 MW and biogas energy to 4.5 MW by the end of 2016.

Today, the renewable energy generation capacity of the city of Surat stands at 120.2 MW which is more than any other city in the country. This includes 41 MW of solar energy, 73.7 MW of wind energy and 5.5 MW of biogas. The renewable energy produced in the city is taking care of the energy needs of SMC for its public works and is also providing power to more than 6000 households in the city.

M. Thennarasan, IAS, Municipal Commissioner, SMC told NDTV that not only is the city of Surat becoming increasingly independent of conventional sources of energy such as coal, the Surat Municipal Corporation has also become the first civic body to use the most amount of renewable energy to meet its power need in the country. It is currently meeting 34 per cent (8.5 crore units) of its total power need of about 25 crore units per year through renewables.

Alekhya Datta, a researcher at The Energy and Resources Institute (TERI) who is associated with SMC’s renewable energy project said to NDTV,

Since 2016, the SMC has been working aggressively on its renewable energy mission. From powering water distribution and water treatment plants, to running health care centres to lightening up about 15 municipal schools, SMC is using renewable energy for delivering public services under its mandate, as much as possible at present. This is saving an electricity cost of more than seven lakh per month.

He further informed that SMC’s renewable energy facility produces 43.4 MW of renewable energy which is being used for its civic services. This includes 32.4 MW of wind energy, 6 MW of solar energy and 5 MW of biogas. The municipal corporation is saving around 90,000 tonnes of carbon emissions every year by using renewables.

The SMC, according to Mr. Datta, targets to increase the use of renewable sources for meeting up to 50 per cent of its total power requirements by 2022 and eventually in the coming years, completely shun the electricity produced using coal and become 100 per cent renewable based.

The Sun Is Brightening Up More Than 6000 Households In Surat

Jinesh Patel, Assistant Engineer, Energy Efficiency cell, SMC informed NDTV that in a bid to increase the use of renewable energy among the citizens of Surat, the SMC is focusing on rooftop solar plants for households. For this, the municipal corporation has started a dedicated web portal along with single window system for the convenience of the consumers. He said,

The citizens need to simply apply for the solar rooftop through the single-window system or by visiting SMC’s online portal. Everything after that will be taken care by the SMC which include the appointment of the agency for installing solar panels at home, and taking the required permissions from stakeholders like local DISCOM (electricity distribution companies).

According to Mr. Patel, to encourage the use of renewable energy among people, the central government offers subsidies of 30 per cent of the total cost of the rooftop solar plant and along with this the state government of Gujarat is also providing a subsidy of Rs. 10,000 per kW capacity of rooftop solar panel to be installed. Thus, after the subsidies, consumers are required to pay only about Rs. 23,600 as one-time installation charge for 1 kW which costs almost Rs. 48,000 without subsidies. SMC has also collaborated with public banks to help people who need financial aid for setting up rooftop solar panels at their homes.

After installing solar panels, one can easily recover the amount spent of installation within 2-3 years as electricity becomes cheaper for the users. We have got great response from the people and till date we have received more than 8,000 applications out of which SMC has already successfully closed 6,000 applications and is in process of installing rooftop solar panels in the remaining 2,000 households. The total capacity of the current residential rooftop installations is 35 MW.

NDTV spoke with a rooftop solar plant beneficiary, Avnish Shah who said that since SMC has started generating electricity from renewables, the electricity shedding has significantly reduced in the areas governed by it. As per him, solar power has come as a big relief for local residents as their monthly bill charges have fallen by to a great extent.

Mr. Khatwani signs off saying that SMC is now collaborating with industries to encourage them to replace the conventional form of electricity with renewables. He said,

Along with the people of the city, we have motivated many industries also to install renewable energy facilities for their day-to-day operations. Renewable energy will be more profitable for them because their electricity consumption per day is high.

Status Of Renewable Energy In India

According to the MNRE, as of February 2019, total renewable power installed capacity (excluding large hydro power plants) in the country stood at 75.06 GW. Notably, the solar power generation capacity of the country has increased over 370 per cent in the past three years and currently, more than 12.2 GigaWatts (GW) of solar energy is being produced, says MNRE. The Ministry has set a target to build capacity for generating 175 GW of renewable energy by 2022 with an aim to reduce India’s carbon footprint by decreasing the country’s dependence on conventional sources of power like oil, gas, and coal.