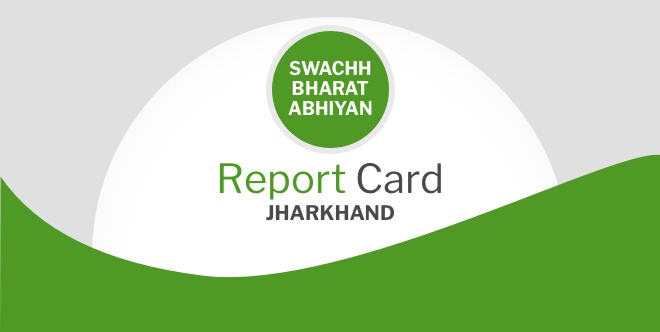 Mumbai: When heavy rains lashed Nadi Toli village in Jharkhand in July this year, villagers were convinced that they would have to wait for another month before getting a toilet. The raw materials that were being transported from the capital, Ranchi to the village to construct toilets had to be left unattended 800 metres from the village. As it became nearly impossible for any vehicles to navigate through knee-deep waters, the panchayat officials and villagers took help of ‘behenge’, a conveyance system comprising bamboo with two baskets and delivered the materials on foot. The work resumed and within 15 days the village was declared open defecation free (ODF).

Also Read: How Installation Of Solar-Powered Lights In Toilets Is Helping Towards Sustained Usage Of Toilets Among People In Ranchi

This was one the many silent success stories where people from the state proved that sanitation is on the top of their priority list. In fact, a Centre for Science and Environment (CSE) report underlines that it is the community participation that led to a higher sanitation coverage,

One of the reasons behind Jharkhand’s relative success is the involvement of local communities and bodies such as women’s self-help groups. These communities and bodies have helped create awareness among residents; they have also monitored the toilet construction process. The state is also moving forward on putting in place better wastewater and solid waste management systems, the report stated.

When Swachh Bharat Abhiyan was launched in 2014, merely 28 per cent of the villagers had access to toilet and today the coverage stands at whooping 94 per cent. However, when one looks at the ODF journey in the state it was rather slow in the beginning as its first district was declared ODF only after three years into the cleanliness mission. Ramgarh was the first district in the state to get the ODF tag and presently 14 of its 24 districts are free from open defecation. The remaining ten are undergoing a third-party verification by the Quality Council of India. 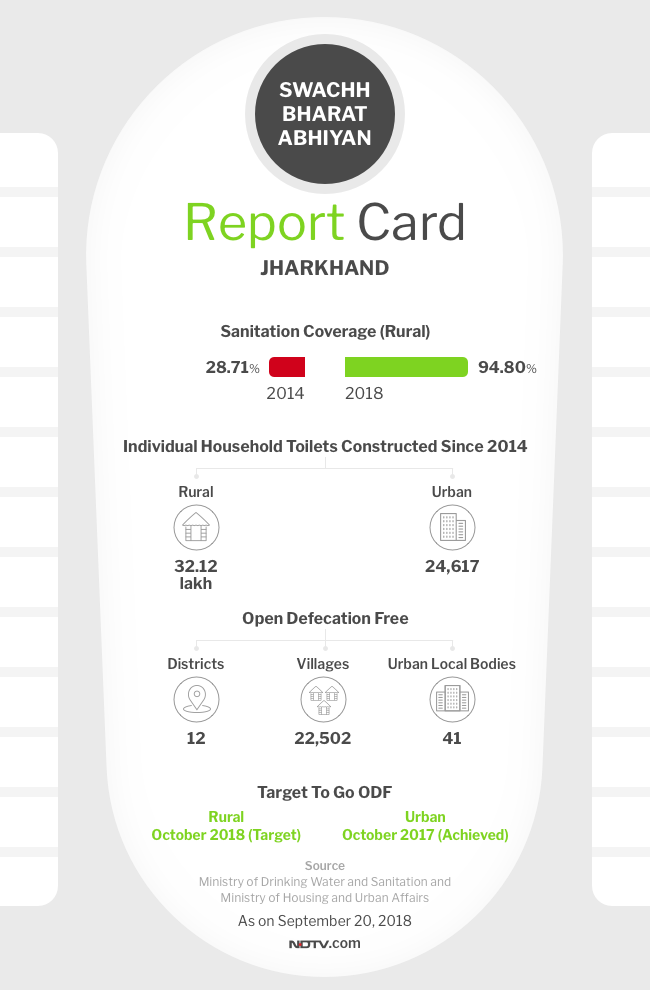 Chief Minister Raghubar Das had announced last year on Rashtriya Swachhta Diwas that rural Jharkhand will go ODF on October 2, 2018 and we are confident to turn the promise into a reality. All the houses in rural areas have access to a toilet. The third-party verification is likely to get over by end of September and on October 2 we will make the official announcement.

Nearly 32 lakh toilets (32,12,724) have been constructed over a period of four years and majority of the districts have resorted to self-funding and self-construction of toilets. The main focus of the ‘Information, Education and Community’ (IEC) methodology was on the ownership of toilets, points out Mr Sharma,

Since the very beginning our activities were targeted towards making people understand the importance of toilet and this is possible only when it is valued and owned. Though not all but most of the citizens came forward and funded their own toilets. Houses who were unable to do so, the Zilla Panchayats sponsored the toilets from their account. In districts like Seraikella Kharsawan, neighbours pooled money and help each other.

It's inspiring to see the on ground momentum of #SBM. To change people's attitude towards safe sanitation, women masons in Jharkhand are undergoing their own hands on training for building toilets @swachhbharat pic.twitter.com/UL4uEz0pAH

Jharkhand organises Swachhta Diwas on the 19th of every month across all the schools in districts to spread awareness. On the 2nd of every month, a Swachhata Sabha is organised across all gram panchayats where discussions on toilet status, usage status and ODF status are held so that residents are up to speed with developments on the sanitation front.

Taking advantage of the fact that most of its rural population is engaged as labourers or construction workers, private contractors to construct the toilets were not hired. Villagers who worked as labourers in different parts of India were called back for a brief period to construct toilets and were paid in return.

The journey in rural areas of the state is not without its challenges and like every other region in India, changing people’s behaviour towards sanitation is a major issue. Jharkhand, being an economically backward state (according to Raghuram Rajan Committee Report of 2013) convincing people to stop open defecation at the cost of constructing a toilet was a daunting task for the government authorities.

One, people would have to break their daily practice and adapt themselves to a new hygienic environment and secondly they would have to shell out money. It took nearly 2-3 years to change their mindset and habit. However, once they came on board there was no looking back, says Mr Kumar.

Owning colourful #toilets at home is a matter of pride for people in Simdega district of Jharkhand as it ensures safe sanitation and puts an end to diseases pic.twitter.com/Pj7AOqzZcN

And one of the significant examples of this was seen when one lakh toilets were constructed within eleven days across its districts in February this year. This mammoth task escalated the state’s overall toilet coverage

Urban Jharkhand Prepares For Yet Another Battle, This Time Against Waste Management

When an ODF urban Jharkhand was declared as India’s best performing state in terms of cleanliness in Swachh Survekshan 2018 that took place in May, the Swachh Bharat Mission-Urban (SBM-U) department in the state announced its commitment towards achieving 100 per cent waste segregation and processing. The commitment was an extension to ODF plus status under the cleanliness mission that demands scientific management of liquid and solid waste.

A few days after urban Jharkhand was declared free from open defecation (October 2,2017), we started to chalk out a plant for ODF plus mission. Without wasting much time, we have adopted the same awareness strategy for waste management that was adopted to eliminate open defecation last year. Community involvement and decentralised policy is a must if we have to achieve any task, Ambarish Kumar, official from SBM-U, Jharkhand tells NDTV

There is a total of 41 urban local bodies in the state and all of them have started practising source segregation and this is urban Jharkhand’s biggest achievement considering that only a year ago, most of the households didn’t know what segregation means. 100 per cent door-to-door implementation has also been achieved.

#Jharkhand has mapped all of its Public/Community Toilets and Toilets in Malls, Petrol Pumps, Restaurants etc. on @googlemaps across 41 cities.

1,117 locations of "Swachh Public Toilets" have now gone live in the state! pic.twitter.com/ixrVkeYMDl

However, a major challenge that lies in front the state government is the treatment of waste. Presently, there is no facility in urban areas where waste can be treated scientifically and hence all of the waste ends up on landfills.

Before developing the necessary infrastructure to treat waste, we wanted to get people into the habit of handling their own waste. As soon as we crossed a 60 per cent mark in source segregation, tenders to develop waste treatment plants and sewage treatment plants were floated. Detailed project reports of 26 urban local bodies to manage waste are ready and once we get the tenders out, waste treatment centres will be developed to treat garbage at decentralised level. In terms of liquid waste management, liquid waste management tenders will be floated by December end, adds Mr Ambarish Kumar.

In terms of ODF progress and sustenance report, over 24,000 toilets were constructed in four years. To sustain the tag, the urban areas of Jharkhand have begun using stickers in public toilets. Once a toilet is constructed, if all families in a particular area use a toilet, it is marked with a green sticker. If a toilet is being used partially, it is marked with a yellow sticker. If a toilet remains unused, a black sticker is used to mark it.

Also Read: Human Waste Turned Into Manure Is Being Used For Farming: A Success Story From Jharkhand

ODF sustainability is the key to ensuring proper sanitation. The stickers are making the ODF sustainability transparent and public as everyone can see their region’s status. There is a kind of silent competition to get the green sticker on the toilet. Areas where toilets are still marked in yellow or black are being given additional awareness programmes to help people understand the benefit of using toilets, says Mr Ambarish Kumar.

With urban Jharkhand already declared ODF and its rural counterpart only a few days away from achieving the Swachhta feat, a challenge that is common in both the parts is the sustenance. Besides, ensuring that people do not switch back to the old practice, the authorities will also have to maintain the newly formed toilets in a healthy condition with public and community toilets having a regular water supply. With regard to the ODF plus status the journey is long but possible as source segregation, a key to waste management, has already been taken care of.