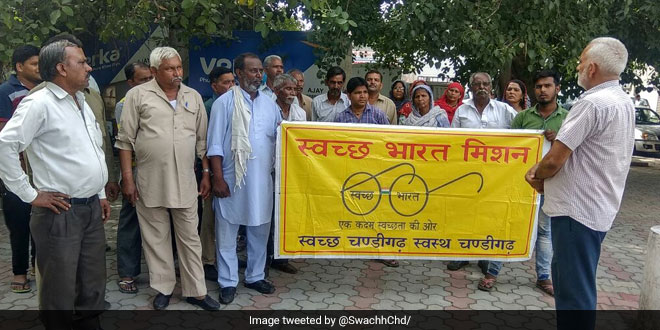 New Delhi: Chandigarh was declared the third cleanest city in the country in the Swachh Survekshan 2018 results, which were announced by Hardeep Singh Puri, Union Minister for Housing and Urban Affairs on May 16. Chandigarh, also known as City Beautiful and one of the country’s best-planned cities, is just behind Madhya Pradesh’s Indore (Rank 1) and Bhopal (Rank 2) this year. The city has seen a huge improvement from its 11th position in the Swachh Surveksan 2017, when it lacked in proper garbage disposal and did not score well in citizens’ feedback on how clean is the city. Learning from the drawbacks, the civic body this time put optimum efforts in these segments and managed to secure the third spot. On achieving this feat, the commissioner of Chandigarh Municipality Corporation, Jitender Yadav said that it is a proud moment for all the Chandigarh residents, officials and municipal councilors who worked together to make Chandigarh stand true to its identity as City Beautiful.

Member of Parliament from the Union Territory, Kirron Kher congratulated the entire civic body and urged people to keep up the good work to ensure the city remains clean, always.

Congratulations Chandigarh ! We are Number 3 in the cleanest cities of India. Well done and keep it up !#ChandigarhPride #स्वच्छ_भारत pic.twitter.com/irdJEtimld

Chandigarh’s performance in the Swachh Survekshans so far

In Swachh Survekshan 2016, Chandigarh fared well and was declared India’s second cleanest city after Mysuru, amongst the other 73 cities which were surveyed.

But in 2017, when the survey was conducted in 434 cities, the union territory slipped out of the top-10 cleanest cities in the country to rank 11th. Reason – failure to dispose of the garbage gener Chandigarh scored 1,701 marks out of the total score of 2,000. The worrisome part was it got only 379 marks out of 600 in the citizens’ feedback category. Further in this category, for the downloading Swachhta application (part of citizens’ feedback), Chandigarh scored only 30 out of 150 while in the feedback given through number or website, they got 349 out of 450.

In this year’s Swachh Survekshan, the Union Ministry of Housing and Urban Affairs gave more weightage to citizen feedback (collection of feedback directly from citizens and monitoring the performance of Swachhata App – a citizen’s grievance mobile app) category by allotting 35 percent marks – means it had a major say in deciding the outcome of Chandigarh’s ranking. While the Direct Observation category (verification and assessment of general cleanliness in the cities by making random field visits) and Service-Level Progress (verification whether systems and processes are in place in Urban Local Bodies to implement Swachh Bharat Mission) had 30 percent and 35 percent marks, respectively.

The Additional Commissioner of Chandigarh Municipal Corporation, Saurabh Mishra said that Chandigarh faced a downfall in the Swachh rankings in 2017 due to lack of citizen feedback. This year, we worked hard to improve it by organising a number of activities like “Walk With Nature” programme wherein residents and officials walked together to observe the cleanliness status in the city, and then submitted their feedback on a number of swachhta related queries on the Swachhta app.

To encourage the residents to contribute towards keeping the city clean and reporting about any kind of problems related to cleanliness and provide feedback on the Swachhata-MoHUA’ app, we also involved noted Punjabi singers like Sharry Mann, Miss Pooja and actor Savita Bhatti (wife of late comedian and film personality Jaspal Bhatti) as Swachh Bharat Abhiyan ambassadors. From hiring a Radio Jockey to senior municipal officials giving presentations on how important the cleanliness feedback is… the civic body actively did everything possible to ensure that people come forward and give feedback, based on which the officials can the fix the problems, if any, added the additional commissioner.

People used the app to list their grievances and the civic body addressed these complaints on time. In addition to improving on citizen feedback, a number of other unique initiatives were also well received by the people, said Kavleen Kaur, Nodal Officer, Swachh Bharat Mission.

For example, around 25 park development societies in the union territory are now creating compost out of their green waste while the Infosys and MCM DAV College buildings have been declared zero waste. The municipal corporation started night sweeping in all commercial areas, gave occupation certificates to all the waste collectors in the city and assigned the specific localities for an organised collection of waste.

Also Read: Chandigarh Is Stepping Up Its Waste Management Game, Soon The City Will Have Uniform Garbage Collection Rates

The efforts by the civic body showed positive results as the citizen feedback was overwhelming this year… over 37,000 people downloaded the Swachhta app as compared to a few hundreds last year. All of them gave positive feedback on the work being done to keep the city clean, said Kavleen Kaur.

In terms of sanitation coverage, Chandigarh is a certified open defecation city. It was declared open defecation free in September 2016 with the construction of 6117 toilets, and has so far managed to sustain its ODF tag. The city got its ODF recertification done twice – once on June 7, 2017 and then on December 22, 2017.

Besides, the civic body also put in extra efforts towards the maintenance of 828 public and community toilets (all geo-tagged so people can locate them on Google), cleaning of the public places and ensuring that people don’t litter around by imposing a fine of Rs 5000 for littering in residential areas and Rs 10,000 for littering in commercial areas. This ultimately helped Chandigarh score better in the Direct Observation segment of Swachh Survekshan 2018, under which an assessment was done by an independent agency that visited different parts of the city and public conveniences during the survey earlier this year.

In terms of waste management, the city has achieved 100% door-to-door collection in all its 26 wards in 2017 but it has lagged behind in the solid waste management as only 30 per cent of the 450 tonnes waste the city generates on a daily basis.

Proper waste management was something, which restricted the city from reaching the top spot to be India’s cleanest city like Indore. When asked what municipal corporation plans to do to secure the top position in the next Swachh Survekshan, one of the municipal officials said, “In June 2017, the sole waste processing plant in Chandigarh was shut down due to pay related differences between the city’s civic body and the plant operators. During that time, the plant processed only 150 tonnes of waste daily, compared to 450 tonnes that the city generated. This eventually led to the creation of big waste dumps around the city, which is something which has not gone in our favour, when the swachh assessment was being done earlier this year.”

We took immediate steps to ensure that the waste processing works without any hindrance. The garbage plant now works fine and processes all of the 450 tonnes of the waste that the city generates. The city municipal corporation has also recently spent around Rs. 2 crore to purchase dustbins and distribute them among the residents to ensure proper waste disposal, added Kavleen Kaur.

In addition to this, the Chandigarh Municipal Corporation has also worked diligently to submit documents related to swachhta and city’s overall civic structure to the ministry of urban development. “This has helped establishing that Chandigarh has systems and processes in place to implement the Swachh Bharat Mission in an efficient manner. We scored higher on the Service Level Progress parameter,” the official further added.

To be India’s cleanest city, Chandigarh has to maintain all aspects of cleanliness, right from sanitation to proper door-to-door collection of waste and its processing, along with continuous citizen participation.

Related Topics:
Swachh Survekshan 2018
Up Next