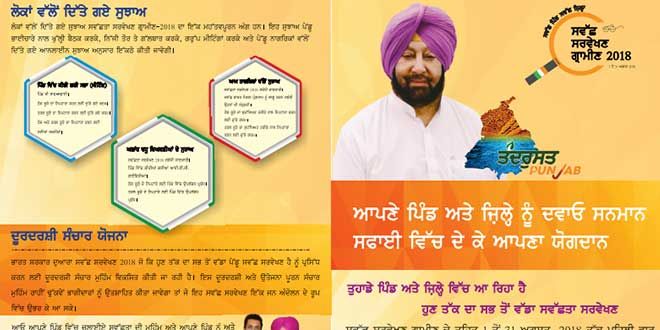 New Delhi: Punjab residents can now get their grievances on sanitation related issues redressed quickly – thanks to swachhta (cleanliness) mobile app as the Punjab government is now embracing digital technology to help achieve the target of Swachh Bharat Abhiyan. Home to around 12,763 villages, Punjab, which has self-declared itself open defecation free (ODF), has now launched an ODF sustainability mobile app that covers all parameters related to sanitation and sustainability. This swachh mobile application has been specially designed to let people give feedback on the status of open defecation in the state or to demand a toilet (if eligible) and register for activities related to cleanliness drives around their villages. According to officials from the state’s sanitation department, the ultimate aim of the mobile app is to ensure faster resolution of swachhta related complaints.

Anyone can download the app and file complaints. If you witness anyone defecating or even urinating in the open or you are fed up of the errant municipal sweeper who regularly fails to turn up to clear the garbage from your locality or forgets to sweep the road and clear the community dustbins… simply submit your complaint through this app. All you need to do is click a picture of the garbage dump or overflowing dustbins and post it on the app, said Sarbjit Singh, Sub Divisional Engineer, Department of Sanitation, Punjab, who is also responsible for designing the Information, Education and Communication (IEC) guidelines for the Swachh Bharat Abhiyan in Punjab.

Once a citizen has registered a complaint, it will automatically get forwarded to the concerned municipal or panchayat authority (all urban local bodies and panchayats have been mapped to this app) as the app will pinpoint the exact location of the area of the complaint using the geo-location. As the complaint will get registered online, authorities won’t be able to ignore it.

Since Punjab is ODF, we don’t want people to indulge in open defecation for any reason. Though, the sanitation department has set up ‘Nigran Committees’ in all villages that carry out morning nigrani (monitoring) to stop people from defecating in open, but this app will empower people to report about sanitation issues. Based on the complaints, we will then work to provide a solution for the same… the idea is to ensure that people keep using their toilets, which will ultimately help the state sustain its ODF status. The app also allows the complainants to know the status of their complaints… whether it has been rectified or not, added Mr Singh.

Also, any community member who has been left out of the Swachh Bharat programme and does not have a toilet for some reason, can access a toilet application form through the app. After checking online their eligibility criteria, they can submit an application form and subsequently track progress of their application.

Through this mobile app, we want to encourage the people to give direct feedback on sanitation so that the government’s goal of making Punjab a Swachh and Tandrust (Healthy) state can be achieved with citizen’s feedback on sanitation participation… which is accountable for 35 percent marks in the Swachh Survekshan 2018, said Razia Sultana, Minister of Water Supply and Sanitation, Punjab.

This mobile application is linked to My Village My Pride campaign, which intends to sensitise people about the importance of cleanliness, and making it a Jan Andolan through people participation. All individuals and community influencers such as Youth clubs, self-help groups (SHG), volunteer groups, women groups and NGOs are being invited to participate in this programme. “As part of this programme, swachh officials and volunteers will adopt a village and carry out a set of predefined activities in the adopted village. Thereafter, they are required to report their activities using the mobile application on real time basis. Training will be imparted to the participants and awards amounting to ₹1.88 crore will be given according to their performance,” said one of the swachh officials.

Besides, the app has a social media corner and a sanitation gallery where all IEC materials and creatives can be viewed, informed Sarbjit Singh.

Mr Singh further informed that with a view to make Swachh Sarvekshan Grameen 2018 a jan andolan (mass movement) in Punjab and to enhance people’s participation, the IEC material has been designed and created in regional ‘Gurmukhi’ language.

The IEC material comprises brochures, pamphlets, banners and jingles to create mass awareness among the community about the ranking of their districts and importance of keeping their villages and environment clean, Mr Singh said.

The swachhta survey will be conducted from August 1 to 31, and the results will be announced in the form of a ranking of all 698 districts and around 6,980 villages on the basis of quantitative and qualitative sanitation (Swachhata) parameters. And, the top performing states and districts are expected to be awarded on October 2.