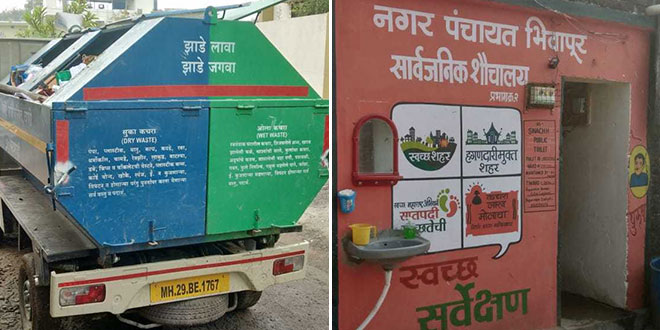 New Delhi:  Maharashtra, the second most populous state in the country has been ranked third among the best performing states in the country after Chattisgarh and Jharkhand in the Swachh Survekshan 2019. The state, which was on the second position in the last survey, has slipped one notch this time. However, with 46 awards in total, it has managed to bag the most number of awards as compared to other states. Rahul Khandare, an official in-charge of IEC (Information, Education, and Communication) for Swachh Bharat Mission, Maharashtra said,

It’s an honour and very encouraging to become the State with a maximum number of awards in almost all categories. It is the robust citizen feedback mechanism created by the state, that has helped in the improvement as well as the achievements. We ensured constant communication with citizens and did one on one grievance redressal for each feedback/ grievance received by us. We will strive to become number one in cleanliness in the next survey with the help of the support and cooperation of the citizens of Maharashtra.

Maharashtra’s all 391 urban local bodies became ODF in 2017 and 105 of its ULBs will soon become ODF plus plus (ODF ++). The public toilets in the ULBs soon-to-be ODF ++ have modern amenities like hand dryers, hand washes, sanitary napkin vending machines in addition to 24-hour running water supply, proper lighting infrastructure and cleanliness in these bathrooms is maintained throughout the day. As many as 168 ULBs have integrated 100 per cent of the informal waste pickers into the formal sector.

According to Mr. Khandare, the ULBs in the state were categorised according to the size of the population and different strategies were used in each ULB to promote cleanliness on the basis of the demography present in each ULB. Out of the 391 ULBs, a total of 383 ULBs have uploaded their public toilets as ‘SBM Toilets’ on Google maps thus giving easy access to people for utilisation of public toilets.

The one thing which was practiced across all ULBs was waste collection and segregation. Efforts were made to reduce waste in the landfills and clear the local dumping yards. For this, wet waste was converted into composts and the dry waste was managed by ‘Material Recording Centers’ where solid waste like plastic, metal, and paper waste collected gets segregate and supplied to various recycle units set up in the state.

In an effort to reduce the toxic waste generated by plastics, the government of Maharashtra imposed a state-wide ban on single-use plastic in April 2018. According to Mr. Khandare the ban is being imposed in a very stringent manner. The state now aims to become a landfill-free state and has started the process of cleaning its landfills and dumpsites. There are 19 ULBs which have already completed cleaning of the dumpsite and have zero landfill models in place.

Within the state, Navi Mumbai was found to be the cleanest city followed by Kolhapur, Mira-Bhayandar, Chandrapur, Ambarnath, Wardha, and Vasai-Virar.

Navi Mumbai which was also ranked at 7th position in the list of cleanest cities of India became the best city in ‘Citizens Feedback’ in the Swachh Survekshan 2019.

Maharashtra’s Latur was awarded as the best city in ‘Solid Waste Management’ in medium city category with population 3-10 Lakh.

Chandrapur has been awarded for best city in ‘Citizens Feedback’ in medium city category with population 3-10 Lakh.

Maharashtra’s cities Lonavala, Mul, Vita, Kharhad, won ‘cleanest city’ in the west zone in various categories based on the size of the population. However, Greater Mumbai, the capital city slipped several notches to stand at 49, after bagging the cleanest state capital tag and a nationwide 18thrank in the last survey. Pune’s rank dropped from 10 to 37 despite several initiatives to improve its ranking the swachh survey like setting up Project Implementation Unit (PIU) to study the city’s performance and plan programmes accordingly to raise awareness and improve the status of cleanliness in the city. Four ULBs of the state, Navi Mumbai, Karhad, Lonavala and Mul, feature in the top ten list of India irrespective of the size of population categories.

Electric Vehicles: In A First, 40 Low-Floor Electric Buses Will Ply On Jammu And Kashmir Roads Soon