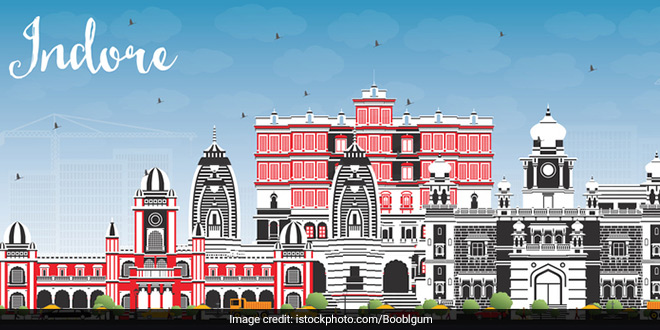 In the Swachh Survekshan 2021, Madhya Pradesh’s Indore has been given the title of India’s cleanest city for the fifth consecutive year

New Delhi: Madhya Pradesh’s Indore has been given the title of India’s cleanest city for the fifth consecutive year, as per the Swachh Survekshan 2021 – the annual survey of cleanliness, hygiene and sanitation in cities and towns of the country. The
results were announced by President Ram Nath Kovind at a function held in the Capital on Saturday (November 20).

Surat and Vijaywada were ranked second and third cleanest cities in the Swachh Survekshan 2021 list, whereas, in states, Chattisgarh was ranked on top for the third consecutive year, followed by Maharashtra and Madhya Pradesh. 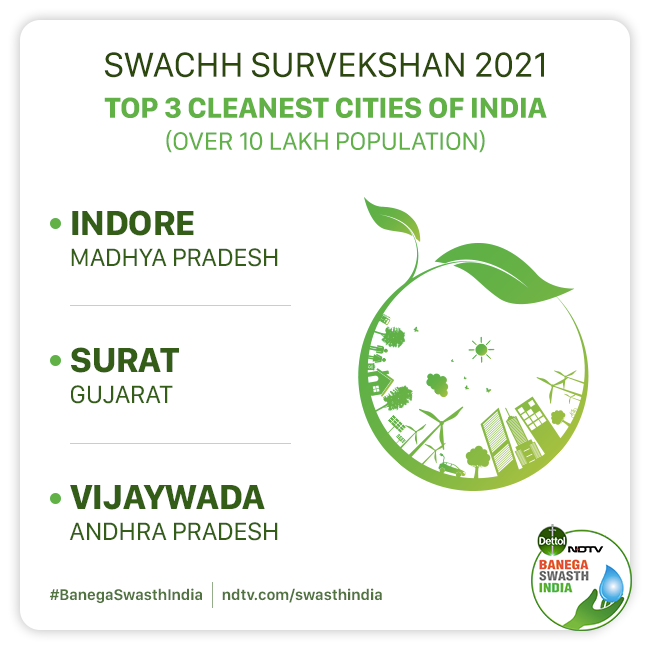 Under the guidance of our Prime Minister Narendra Modi, Madhya Pradesh has achieved a new era of cleanliness. I feel very proud to announce that Indore is on top once again. Madhya Pradesh has been honoured to receive 35 awards in this year’s Swachh Survekshan awards. I would like to congratulate each and every citizen of the state, municipal workers and members of authorities, who have made sure, Madhya Pradesh remains on top.

Indore is India’s cleanest city for the 5th year in a row. Heartiest congratulations to the people, political leadership, Municipal Corporation, Swachhagrahis & Safaimitras for their exemplary commitment towards keeping the city on top.

Indore is India’s cleanest city for the 5th year in a row.
Heartiest congratulations to the people, political leadership, Municipal Corporation, Swachhagrahis & Safaimitras for their exemplary commitment towards keeping the city on top. @rashtrapatibhvn @ChouhanShivraj pic.twitter.com/ShLcbXkGzc

A Look At How Indore Continued To Retain Its Title

Indore is the largest city in the state of Madhya Pradesh. The city has managed to win the top rank every year since 2017. Indore has continued to retain its position as every year the city manages to sustain its previous title and move ahead and make city more sustainable, green and eco-friendly. After making the whole city Open Defecation Free (ODF) and landfill-free, from last few years, Indore Municipal Corporation (IMC) has been making the city cleaner by focusing on waste management at source. The agenda of the municipal corporation is to make recycling, reusing and disposing off the waste faster and in a more organised way.

The city has now moved to six-bin segregation of waste at source for the household/commercial place level which include separate bins for dry waste, wet waste, plastic waste, e-waste, domestic sanitary waste, and domestic hazardous waste.

One of the reasons why we have been able to retain India’s cleanest city title is because of the trust and cooperation from the people of the city.

Also Read: #BeatPlasticPollution: Indore Introduces ‘Thaila Bank’ To Phase Out The Use Of Single-use Plastic Bags

Explaining the initiatives, he said, “One of the major focus areas that Indore sweared by is waste management.”

On average, the per day waste generation by the city includes 530 tonnes of wet waste, 460 tonnes of dry waste, 14 tonnes of plastic waste, 2.5 tonnes of e-waste, 11 tonnes of sanitary waste, and 3.5 tonnes of hazardous waste. To deal with each kind of waste in the city, we have created a separate system. The city has also been working on strategies to eliminate waste generation at the source itself and has been able to establish four wards as zero-waste wards.

The waste collected by the municipal corporation is transported in covered vehicles and the transportation and processing of 100 per cent of the waste is done on the same day. The IMC has also established several wet waste processing plants to process its wet waste. Indore is also undertaking an initiative to convert waste into energy with an aim to deal with wet waste and at the same time reduce the city’s dependence on fossil fuel which causes more air pollution. The Waste-to-Energy plant installed by IMC converts wet waste into 95 per cent pure biogas called Methane which is further converted into CNG (Compressed Natural Gas).

Talking about other ways in which city is managing its waste, Mr Warsi added,

We also have undertaken an initiative of garden waste management under which about 59 tonnes of bulk garden and horticultural waste is being processed every day. IMC also uses Mobile Composting Units for making compost from waste. We have also been encouraging people to practice home composting. Currently, more than 50,000 households in the city are composting their kitchen waste at home. In terms of plastic waste, IMC follows a unique system of garbage collection, all the households that come under IMC area have been given two large bags for them to store plastic waste separately. When one bag is filled, people send a message to the agency appointed for recycling the plastic waste in the city. The agency sends its personnel to the household to buy the plastic from them at a minimum price of Rs. 1.5 per kilogram up to Rs. 5 per kg depending upon the quality of the plastic. Thus, not only is IMC saving on transportation and handling of plastic waste with this process, but it is also helping people gain out of their scrapped plastic products.

Along with all this, Indore has also been given the tag of India’s first “water plus” city, which is a certificate provided to a city for maintaining cleanliness in rivers and drains under its administration. According to the guidelines of Swachh Bharat Mission, a city can be declared as Water Plus only after all wastewater released from households, commercial establishments, is treated to a satisfactory level before releasing the treated wastewater into the environment.

This year, in Swachh Survekshan 2021, the cities have been ranked based on three broad parameters — service level progress, citizens voice and certification — and were judged on a total of 8,600. In the ranking of the cities, maximum weightage — 40 per cent — was given to segregated collection of garbage, processing, disposal and sustainable sanitation. While, citizen feedback carried 30 per cent weightage and certification under the star rating protocol for garbage free cities carried another 30 per cent.
This year, as part of the awards, a new category titled ‘Prerak DAUUR Samman’ was introduced which has a total of five additional sub-categories which are Divya (platinum), Anupam (Gold), Ujjawal (Silver), Udit (Bronze), and aaRohi (Aspiring). On the basis of segregation of waste into wet, dry, and hazard categories, sanitation status of cities, percentage of waste going to landfills, and other factors. This year, Prerak DAUUR Samman category has categorised the following cities – Indore, Surat, Navi Mumbai, New Delhi Municipal Council and Tirupati in ‘divya’ (platinum) category.

Can Fashion Ever Be Sustainable? Climate Change Warrior Kriti Tula Proves It With Her Label Doodlage