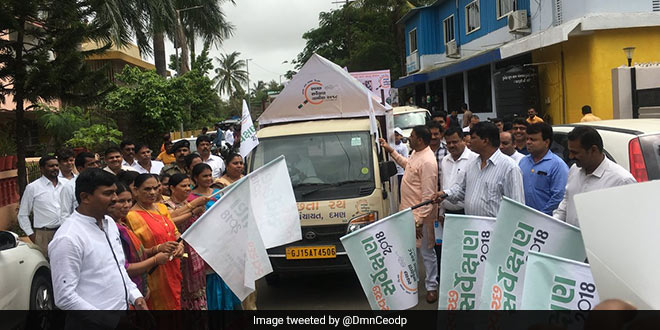 New Delhi: Boarding the cleanliness bandwagon, Daman, one of the two districts in the union territory Daman and Diu, launched ‘Swachh Survekshan Grameen’ 2018, a national survey to rank rural districts in states on the basis of sanitation led parameters, such as direct observation, citizens’ feedback and service level progress. Launched by the Union Ministry of Drinking Water and Sanitation on July 13, the month long programme was initiated in Daman on August 1. As part of the official launch, a Swachhata rath and rally was flagged off by the Collector of Daman, Chief Executive Officer District Panchayat, President of District Panchayat, and Sarpanches.

To promote the message of cleanliness and sanitation among the citizens, the district administration unveiled the IEC (Information, Education and Communication) posters, which were put up on the Swachhata rath.

Swachh Survekshan Grameen – 2018 #SSG2018 – a programme that is designed to provide a national level ranking to states/districts on key #sanitation led parameters, has been initiated from today onwards in Daman district & also unveiled the #IEC posters. @prafulkpatel @Sajjan95 pic.twitter.com/VGVkgkNMIB

Since, citizens’ feedback, which has been given 35 per cent weightage, will also contribute in determining the rank of each district under Swachh Survekshan Grameen 2018, the district officials initiated awareness programmes.

To ensure that Daman district achieves top position in this year’s Swachh Survekshan Grameen, the officials are leaving no stone unturned. From door to door garbage collection and waste segregation in all the villages and panchayats in the district to cleaning of roadside debris and garbage, the district is doing all.

A step ahead in #SSG2018 and #SwachhBharatMission, a glance at daily activity of door to door garbage collection with all safety and sanitary kits as well as segregation of waste being carried out in all the villages and panchayats of Daman district @prafulkpatel @Sajjan95 pic.twitter.com/BOMh86ZZAi

Cleaning of roadside debris and garbage, gali and mohallas being carried in all the villages and panchayats of Daman to ensure and maintain the standard of cleanliness of households and their vicinity @prafulkpatel @Sajjan95 pic.twitter.com/bjMpdnRmWp

A glimpse at the effort of the workers of District Panchayat – Daman in keeping the surrounding orderliness in various villages and panchayats of Daman district. Kudos to their efforts. #SSG2018 #MondayMotivation @prafulkpatel @Sajjan95 pic.twitter.com/RQd3eAqQqV

This year, the survey will cover 698 districts out of 712, 6,980 villages and 34,900 public places, which include schools, Anganwadis, public health centres, markets and places of religious worship. Along with this, the Ministry will take feedback – both physically and online, from 50 lakh citizens. The top performing districts and states will be awarded on the occasion of Gandhi Jayanti on October 2, this year.

The ranking will be based on a set of parameters which includes data from the Swachh Bharat Mission IMIS, district level surveys of public places and citizen’s perception of swachhta and their recommendations for improvement of the program.

Government Issues Advisory, Asks Citizens To Not Use National Flags Made Up Of Plastic