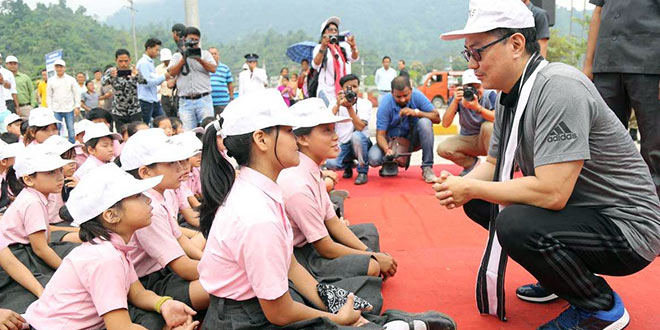 New Delhi: Union Minister of State for Home Affairs, Kiren Rijiju launched ‘Swachhata Hi Seva’ cleanliness drive on Saturday at Naharlagun railway station of Papum Pare district in Arunachal Pradesh. He also participated in the drive and did shramdaan (volunteer) to clean up the area. The cleanliness drive received ‘shramdaan’ from a large number of people including government employees and students. “We must inculcate cleanliness awareness on daily basis to make it a culture”, said Mr Rijiju in his social media post about the drive.

The #SwachhBharat mission has reached every part of India. #SwachhataHiSeva launched by PM @narendramodi ji has galvanised everyone especially the children. Today we cleaned the Naharlagun Railway Station & I managed an Ambulance for Papum Pare District. pic.twitter.com/YBB9FT9ZEk

Referring to the impact of Swachh Bharat Mission, Mr. Rijiju asserted that the Clean India Mission has reached every part of India and has galvanized everyone especially the children. Through the cleanliness drive, Mr. Rijiju intended to motivate the people, especially the youth and dedicated the campaign to the young children of Arunachal Pradesh.

I dedicate this round of #SwachhBharat campaign to the young children of Arunachal Pradesh. The children are highly enthusiastic about #SwachhataHiSeva pic.twitter.com/ciHiA27kGM

Arunachal Pradesh has been dynamically partaking in the Swachh Bharat Mission and has achieved 100 per cent Open Defecation Free (ODF) status on December 31st, 2017. The coverage of household toilets has increased from only 45.58 per cent on October 2, 2014, when the Mission was launched, to 100 per cent now.

Arunachal Pradesh also joined the rest of the country in launching ‘Swachhta Hi Seva’- a two week long nationwide sanitation campaign that was launched by Prime Minister Narendra Modi on September 15 in the run up to the fourth anniversary of the launch of Swachh Bharat Mission on October 2.