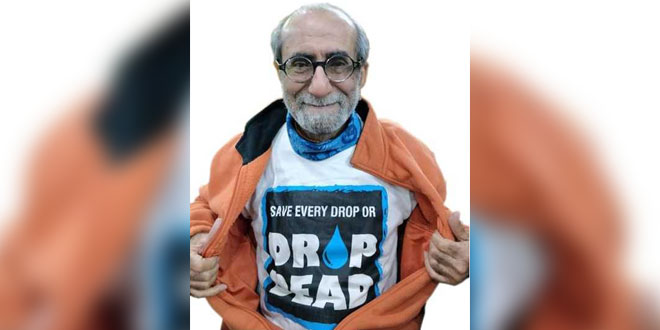 New Delhi: It is 10 in the morning, 84-year-old Aabid Surti, author, painter and cartoonist, accompanied with a plumber and volunteer rings the doorbell of a house on the top floor of one of the apartment complexes on Mira Road, Mumbai and asks a simple question, ‘Do you have a leaking tap?’ If the person says yes, with due permission, he enters the house and fixes faucets for free else moves to the next house. This way, he goes door to door, fixing leakages with a single motive to save water.

Aabid Surti who has been doing this since 2007, spoke to NDTV and explained his motivation and reason behind fixing leakages and conserving water. He said,

I believe in saving every drop of water because I know its value. I have been brought up on the pavement and there I have seen people fighting for every bucket of water. Childhood has been left behind but the fight for water has remained with me and therefore every drop, every leakage haunts me. One fine day in 2007, when Mr Surti was enjoying with his friends, he heard the sound of water dripping and asked his friend to get it fixed. Mr Surti’s friend very casually replied, “It is just a few drops, why are you stressing. Also, no plumber agrees to come for such a small task. Leave it. 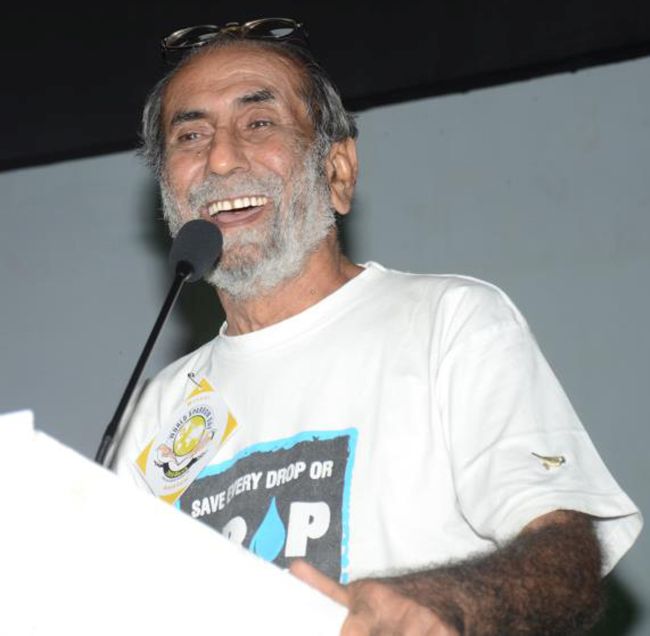 Also Read: Bangaloreans, It’s Time To Save Water! Learn From This Society That Is Saving 500 Litres Of Water Daily

The reply of his friend and the episode was not uncommon. Mr Surti’s body had become so sensitive that even when he is sitting with his friends, chit-chatting, laughing, he’ll hear the sound of water dripping, somewhere in their house.

If in one second, a drop of water is wasted, in a month, 1000 litres of water goes to the drain. I could not digest water, which is a luxury for millions of people, going to the drain for no reason. I decided to put a full stop on water wastage, recalls Mr Surti.

With determination to save water, the very next day which happened to be a Sunday, Mr Surti along with a plumber visited all his friends and got taps fixed. Mr Surti was elated as the fire inside him to save water was put down, but an idea was born. In that very moment, Mr Surti, the water crusader decided to alleviate the water crisis by fixing leakages every weekend and launched ‘Drop Dead Foundation’.

Drop Dead Foundation is a non-governmental organisation (NGO) established in Mumbai to deal with minor plumbing issues such as leaking taps. Drop Dead team consisting of three people – Mr Surti, a plumber and a volunteer, fixes leakages in apartments situated of Mira Road in the city, every Sunday. Explaining the working process, Mr Surti says,

Every week we target a building and on the first day of the week – Monday, we go, meet the secretary and explain him our purpose. After his permission, we put up our posters that read ‘Save Every Drop or Drop Dead’ on the notice board. On Saturday, our pamphlets giving out our details, what we are doing and why, reaches every house in the building. Finally, on Sunday, we start from the top floor, knocking every door, fixing faucets.

While the majority of people let Mr Surti and his team enter their premises and do their job, others shut the door saying they don’t need any help. This way, Mr Surti has saved 20 million litres of water in 12 years, that too single-handedly. 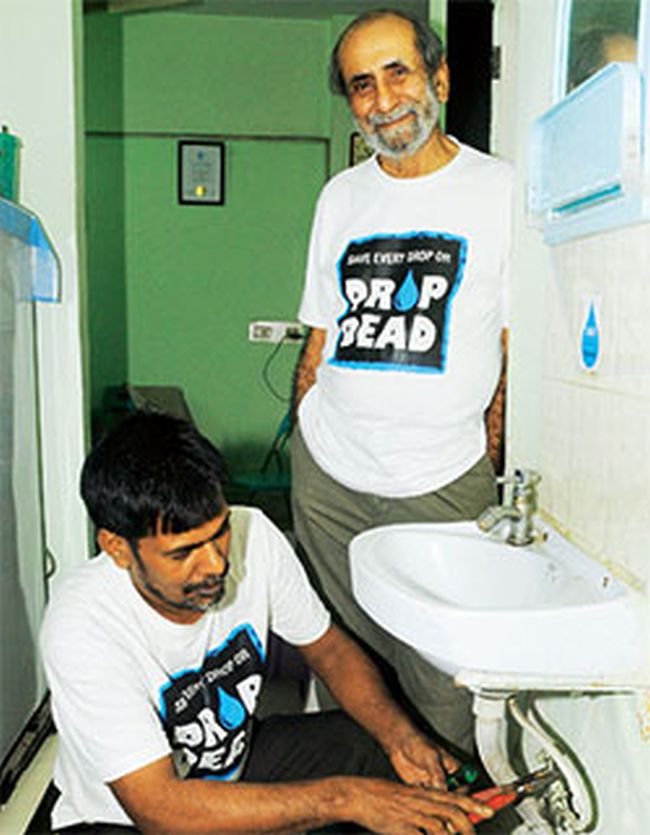 Aabid Surti and his plumber fixing faucets to save water

Is Fixing Leakages A Cakewalk?

Every task comes with its fair share of challenges and in the case of Mr Surti, the challenge has always been financial. With all the passion, when Mr Surti decided to repair taps, he didn’t even give a thought to the expenses until he sat and actually calculated it.

I thought I’ll have to pay Rs. 200 to plumber and a washer costs Rs. 2 per piece, so it won’t burn a hole in my pocket. But doing it on a regular basis involves huge investment. Also, I have to pay my fare, and take care of refreshment for my team. The estimate of weekly expense came to Rs. 1000 which meant monthly Rs. 4000 to Rs. 5000. I don’t have the luxury to bear the additional expense of Rs. 5000 every month, says Mr Suti.

While the water warrior was struggling to make ends meet, he got a message stating he was being awarded Rs. 1 lakh by the Hindi Sansthan of Uttar Pradesh for his contribution to Hindi Literature. With the award money, he continued with the noble cause for the next few years. Time and again, he kept on getting awards and donations from varied sources to keep the Drop Dead Foundation afloat. 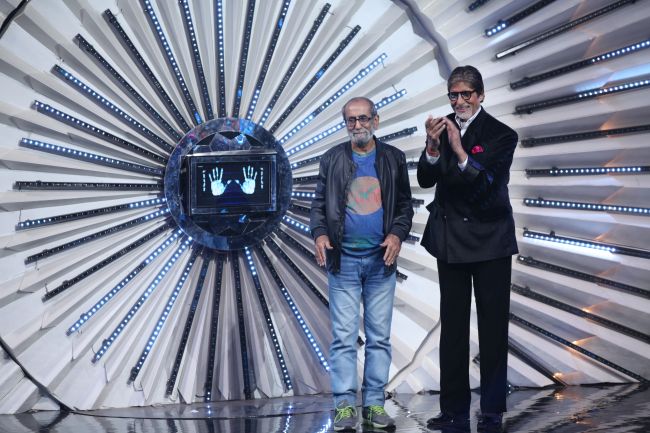 I firmly believe that if you do something with complete transparency, God becomes your fundraiser. Every time I needed money to keep Drop Dead Foundation running, God helped me. He came in the form of actor Amitabh Bachchan who gave me Rs. 11 lakh, Maharashtra government that helped me with Rs. 50,000 in form of an award, a plumber who worked with me for free, so on and so forth, recalls Mr Surti.

Education And Awareness To Connect With The Masses

Two city-based schools have joined hands with the water crusader Mr Surti to take his message to the masses. From putting up messages, organising flash mob dance to conducting rallies, the students are doing all to encourage people to save water. 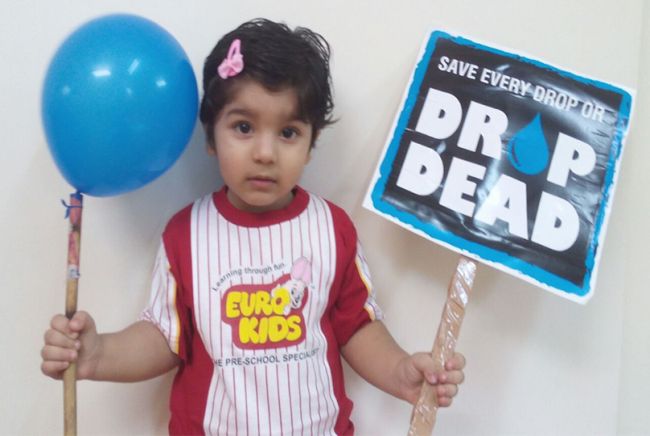 Once we asked school students to take home a poster each, talk to their secretary and put it up on their notice board for at least a week. To encourage students, the principal offered five extra marks if little warriors manage to put posters and show their picture. The aim is simply to educate and ask people to conserve water, says Mr Surti.

To spread the message of ‘save water’, Mr Surti also took help of religion. He got posters printed with a photo of Lord Ganesha and a quote, “Arey balak jab paani nahi hoga to mera visarjan kaha karoge?” (Child, if there won’t be water, where will you immerse me?)

If I would ask people to save water, they won’t but with Lord Ganesha saying it, they would at least give it a thought, says Mr Surti.

Save Every Drop With The Water Warrior

Everytime someone comes up to me and says they want to join me, I tell them, whenever you see a tap running for no reason, close it, this will make me happy and that way you can contribute to the cause. Also, I believe, if everyone takes out two to three hours every week to work in their neighbourhood, then together we all can bring a difference. If I can, you can, signs off Mr Surti.