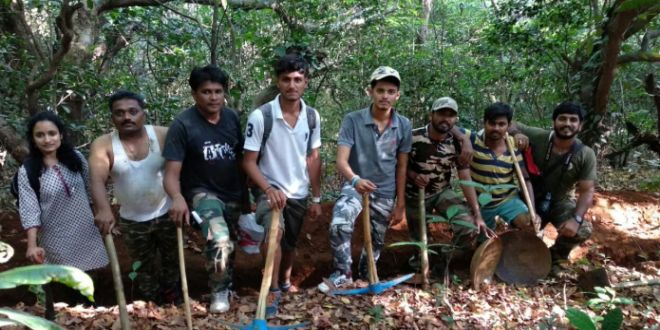 Mumbai: It was 2008, a year when Maharashtra received ample rainfall. Around eight in the evening when the then 22-year-old Pramod Mali was taking a stroll along with his friends right outside his village Amba in Kolhapur district, he witnessed a massive landslide that uprooted several trees and left around 2-3 people dead. As the night culminated into morning, he and his friends helped the locals to pull out the dead bodies stuck beneath the fallen trees. While people moved on after the tragic incident, Pramod was deeply affected by the destruction caused to the trees. Upset by that, he made it his life’s mission to give a new lease of life to dead trees.

Since our village (Amba) is situated to the east of Amba Ghat (pass) on the state highway and is surrounded by a dense forest, landslides are very common, especially during monsoons. While growing up I never realised the amount of damage landslides would cause. The landslide of 2008 served as a wakeup call for me, Pramod tells NDTV.

With the help of his friends, 22-year-old Pramod lifted the trees uprooted from Sahyadri mountains and transported them to the sacred groove named Ambeshwar Devraai located in the middle of a sloping mountain plateau in his village 10 years ago. The trunk of the Nana tree (Lagerstroemia Microcarpa, a flowering tree endemic to India, native to Western Ghats) was as high as 9 feet. Despite the incessant rainfall, the youth managed to arrange for a truck, lifted the tree without any machine and replanted it.

That was the first time Pramod gave a new lease of life to a tree. Since then he and his friends, who proudly call themselves Vanrakshak (forest) Social Force, have replanted over 350 trees that fell during landslides and heavy rains. From transporting trees that are as far away as 20 kilometres to planting all kinds of trees, the team is successfully sustaining the density of the mangrove amidst development.

On asking whether the dead trees are as healthy as the regular ones once they are replanted, Pramod jumps in and says, “The success rate is 80 per cent. It requires no additional amount of care or water. One has to be careful while planting them as once they are planted they will get back to its duties of providing oxygen, fruits and flowers.”

Pramod’s initiative is benefiting the village in more ways than one. From incorporating Swachh Bharat Abhiyan to convincing people to plant trees on special occasions, here’s what Pramod and his team are doing to increase the biodiversity of the village.

“In the last decade, more than 30 resorts have come in and around the village as the Sahyadri mountains is a famous destination for the tourists and trekkers. My philosophy is simply, if one tree is cut we have to balance it by planting the equal number of trees somewhere else to maintain the ecosystem. To construct resorts many trees have been cut. We either try to take those trees and replant them or plant fresh saplings in our sacred groove,” adds Pramod.

Taking advantage of the traditional custom of preserving trees and maintaining the ecosystem, Pramod has been encouraging villagers to preserve the trees.

Cutting of tree or even plucking a leaf used to be considered as inauspicious a few generations ago. When my grandfather told me about it I decided to bring back the tradition. People in the village often cut the branches and pluck leaves for their personal use, says Pramod.

He along with his team went door-to-door visiting each of the 236 households and educated the villagers about it. On one side, while the plucking and cutting stopped, on the other side the team introduced the concept of gifting trees among people.

A year ago, the team introduced new programmes along with the replanting the dead trees. The 10-acre sacred mangrove has been divided into four parts – Punarjanm Mohim (Rebirth Initiative), Mangal Van (For people who get married), Fulora Van (For planting trees on birthdays) and Smruti Van (In memory of friends and family)

Simply telling people to plant trees was not benefiting our mission. As soon as we started associating emotions of love with the tree plantation drives, the mission started taking a pace. This also benefited us financially as till now we used to buy saplings from our pockets, says Pramod.

Whenever any of the team members receive a wedding invite, they politely refuse the invitation and tell the family to instead contribute towards tree plantation, “As many families are very particular about mahurat of the wedding we inform the families of the bride and groom that a tree will be planted at the same time as mahurat. This has so far worked in our favour and we have planted 40 trees since January in the Mangal Van section,” adds Pramod.

Similarly, on birthdays and death anniversary, villagers approach the team and they plant a tree on their behalf thus increasing the overall green cover.

How Tourism Is Disrupting The Cleanliness In Sahyadri Mountains

Where there is man, there is garbage sighs Pramod as he makes a few phone calls to his team to prepare for the next cleanup drive in the lush green forest area around his village.

For people, the concept of a forest or jungle is one where a wild animal is and finding one in dense forest of Amba is difficult. Hence, the tourists often end up spending time in the jungles with their family or friends. Many youths indulge in drinking and music sessions and upon exiting they leave behind alcohol bottles, chips packets and other litter, explains Pramod.

To overcome this problem, Pramod has hired around ten youths from the village. Every weekend, the bunch of boys visit the jungle and discourage people from littering and in the evening pick up the garbage and deposit them in the public bins. Through his venture, Vasundhara Eco Tours, Pramod also takes people on treks on weekends. On these trails he tells them about the benefits of tree plantation and the importance of biodiversity.

For the Vanrakshak Social Force, sustaining the mission for ten whole years was not easy. Getting permission from the Forest Department is a major challenge points out Pramod.

Replanting uprooted trees from a landslide is fine as one doesn’t require a permission to use the tree. However, often it so happens that during rains, the fallen trees are within the area owned by the forest department. In such cases, we have to go through a lot of paperwork and there have been times when we had to let go of the tree only because we didn’t get the required permission. However, now with the mission gaining local importance, the officials are lenient.

Despite getting support from the locals, funding still remains a roadblock for the team. Even today, the team has to pitch money from their own income. Thanks to social media, their movement is getting recognition and people are willing to contribute money. The team is now approaching big companies for Corporate Social Responsibility (CSR) funds.