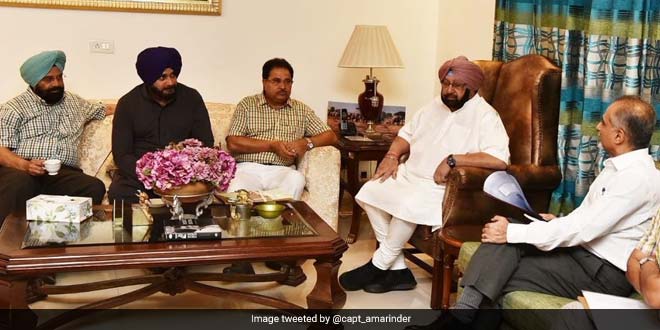 New Delhi: Reiterating the state government’s zero tolerance towards the pollution of Punjab’s rivers, the Chief Minister Captain Amarinder Singh has now ordered a crackdown on polluting industries. To ensure that no industry ends up polluting the rivers, which have nurtured and nourished Punjab, for centuries, the Chief Minister ordered stringent enforcement of the laws and regulations governing the discharge of effluents into the rivers. He also appealed the people to join him in making Punjab a ‘Tandarust Punjab’ (healthy Punjab).

The decision has come in the wake of the protests by people, including farmers, students and members of various social organisations, against the fact that rivers are being used as a dumping ground for pollutants and industrial effluents. Even, the opposition parties have accused the state government of inaction over industries brazenly polluting the state.

The state government drew flak recently after molasses discharge by a sugar mill near Punjab’s Beas town, 40 km from Amritsar, not only contaminated water of the Beas river but also led to death of thousands of fish and other aquatic life.

After conducting a meeting with the senior officials, including that of Punjab Pollution Control Board (PPCB), the Chief Minister said, “My government will not allow pollution to damage the health of the people of Punjab at any cost, whether in towns or villages.”

Strict action will be taken against all polluting units. Neither the industry nor the municipalities would be allowed to flow any effluents into the rivers without treating them, said the Chief Minister, also directing the Chief Secretary to prepare a comprehensive river cleaning plan with a clear timeline for its implementation.

He also asked the Punjab Pollution Control Board to initiate prosecution against the industrial units that are violating the laws.

In a Twitter post, the Chief Minister mentioned that he is seeking Central government’s support for cleaning the rivers, and will also meet Prime Minister Narendra Modi on the issue.

Will not tolerate pollution of our rivers at any cost. Have asked PPCB to crack down on all polluting industrial units & initiate prosecution against those violating law. Also seeking central govt support for cleaning of rivers. Will meet PM Shri @narendramodi ji soon on this. pic.twitter.com/2H38Brz4qL

The Chief Minister through a Twitter post also stated that his government is committed to make Punjab a healthiest state in the country. “Tandarust Punjab is a holistic mission for taking care of the state’s air quality, water quality, safe food & ensuring good environment. Appeal to all citizens of Punjab to join in making it a success,” he wrote in his Twitter post.

We’ve embarked on a mission to make Punjab healthiest state in the country. ‘Tandarust Punjab’ is a holistic mission for taking care of the state’s air quality, water quality, safe food & ensuring good environment. Appeal to all citizens of Punjab to join in making it a success.

Notably, there is a growing concern among people and the environmentalists over the pollution of rivers. Balbir Singh Seechewal, an environmental activist also known as Eco Baba, who resurrected the 110-miles long Kali Bein rivulet (160 km long tributary of Beas in Doaba region of Punjab), referred to contamination of Beas river waters as an ecological disaster.

Taking a serious note of the Beas ecological disaster, even the Union Ministry of Environment, Forest and Climate Change has now constituted a special team which will visit Punjab to look into the causes of the spillage of toxic waste into the river, which not only killed thousands of tonnes of fish, polluted drinking water supply but also affected its ecosystem which according to Punjab Chief Wildlife Warden, Kuldip Kumar would take years to recover.