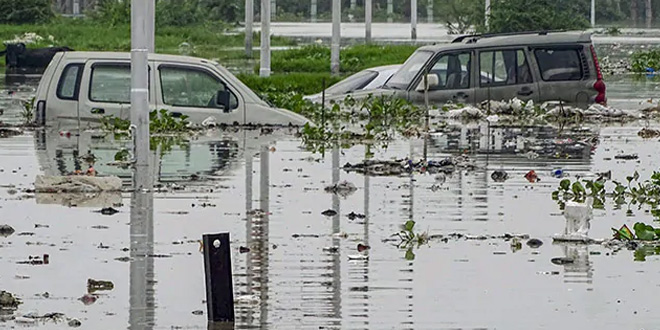 New Delhi: A small stretch of less than two per cent of the Yamuna accounts for 76 per cent of the river’s pollution, according to a monitoring committee overseeing its cleaning. The committee has further said that the river is “fighting to stay alive” and it would not be possible to rejuvenate the Yamuna unless minimum environmental flow is provided as it is “virtually reduced to a trickle and remains dry in some stretches for almost nine months of the year”. National Green Tribunal Chairperson Justice A K Goel had in July formed the monitoring committee comprising retired expert member B S Sajwan and former Delhi chief secretary Shailaja Chandra and directed them to the submit an action plan and detailed report on cleaning of the river by December 31.

The committee has submitted the details to the Delhi government. In the action plan, a copy of which has been accessed by PTI, it is mentioned that “Although the Yamuna river flows only for 54 kilometres from Palla to Badarpur through Delhi, the 22 kilometre stretch from Wazirabad to Okhla, which is less than 2 per cent of the river length of 1370 kilometres from Yamunotri to Allahabad, accounts for about 76 per cent of the pollution level in the river”.

This 2 per cent stretch from Wazirabad to Okhla sees maximum discharge of untreated industrial and domestic wastes. The committee has suggested that a team of scientists be formed from CPCB, DPCC and other institutions like IIT Delhi or NEERI to carry out inspections and submit reports to it for remedial action.

The team can look into the risks and benefits of an alternative way of routing the same quantity of water which can help in reducing the pollution level, it said. The committee has also recommended a mechanism to be worked out jointly with DPCC and CPCB to install an online system for quality testing of water in Yamuna at Palla and Wazirabad.

“Not only standard parameters would be included but also ammonia because this is brought up as a recurrent problem which impacts drinking water supply to Delhi,” it said. The monitoring committee also raised objection to the capacity utilisation of common effluent treatment plant (CETP) which is as low as 25 per cent.

There are 28 industrial clusters in Delhi and 17 of these are connected to 13 CETPs. The remaining 11 clusters are not connected to any CETP. Another area of concern is the direct discharge of completely unregulated waste from industries and residences into the river.

“The industrial pollutants when mixed with domestic sewage are not amendable to treatment even by the STPs due to limitation of treatment technology,” the committee rued. Environmental experts have raised concern over the report of the committee, calling it a matter of great shame and regret for Delhiites.

“This reflects very poorly on Delhi. It is a matter of great shame and regret for Delhiites. The condition of Yamuna could be bettered by improvement in the flow which is the only way through which it can be rejuvenated,” said environmentalist Manoj Misra. Another environmentalist Fayaz Khudsar suggested that building of constructive wetlands is a must for saving the Yamuna.

“The only way to save Yamuna is through building of constructive wetlands to mitigate pollution and using sewage treatment without energy consumption,” said Khudsar, scientist in-charge of the Yamuna biodiversity park.
“All sewage going directly to river causes massive pollution but if the sewage passes through aquatic plants and then to the river then pollution can be reduced. It needs to be understood that a city of this size cannot be devoid of pollution and sewage needs to be treated at source,” he added.

Also Read: Haryana To Raise The Issue Of Untreated Water Flowing Into Yamuna With Delhi