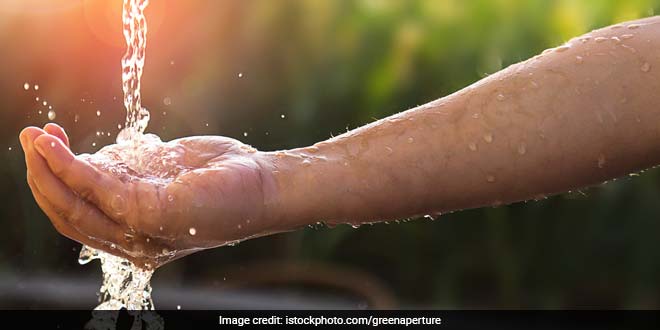 New Delhi: Chennai’s water reservoirs are parched, Karnataka’s river Cauvery is drying up too, Maharashtra and Uttar Pradesh’s water sources are in a dismal state, as are water bodies in many other parts of India. The country is staring at a full-blown water crisis. Minister of Finance and Corporate Affairs, Nirmala Sithraman spelled out water, its management and cleaning rivers as among the ten key components of this government visions for the next ten years. During her budget speech on July 5, the finance minister proposed ‘Jal Jeevan Mission’ to help the country fight water crisis. The aim of the mission is to ensure water in every house (‘har ghar jal’) by 2024. However, as per experts, the budget lacks focus on conserving and rejuvenating water sources like rivers and lakes.

Allocation On Drinking Water Increased But Not Enough

The finance minister in her budget speech said that the government has identified 1,592 blocks in 256 districts across the country that are facing water shortage which will be treated as priority areas under the Jal Jeevan Mission. To support the mission, an allocation of Rs. 10,001 crore has been made under the National Rural Drinking Water Mission for the current year which is about 43 per cent more than the allocation of Rs. 7,000 crore made in the budget estimate of 2018-19.

According to Dr. Indira Khurana, an expert on Water security and a member of Jan Jal Jodo Abhiyan,

Given the kind of challenges the country is facing right now in terms of water shortages, the budget was expected to be more focused on tackling this challenge. The Comptroller and Auditor General of India (CAG) came out with a report in 2017 in which it quoted the Ministry Of Drinking Water and Sanitation saying that to achieve drinking water for all in next years, which is also one of United Nations’ Sustainable Development Goals of 2030, Rs. 23,000 crore are required annually for drinking water. The current government has reduced the time from 2030 to 2024, but allocations are way too less.

She further said that in order to make useful efforts towards drinking water, investments need to be made in building sustainable water sources, water distribution infrastructure. However, the budget remains silent on these aspects.

VR Raman, Head of Policy at Water Aid India, who has been studying the government’s budgets and policies on water also said that while the allocation for drinking water seem to be almost doubled, but for proper implementation of the scheme of water for all, it requires a much higher annual allocation.

According to a NITI Aayog report, India will run out of groundwater in the next 10 years and close to 40 per cent of India will not get access to drinking water by 2030. Nirma Bora, Policy and Research Co-ordinator at WaterAid India, pointed out that groundwater depletion, contamination and lack of access to drinking water are the major water-related issues facing the country because of which the dependence on private tankers is increasing.

The budget speech was completely silent on river conservation and Ganga rejuvenation even though Prime Minister Narendra Modi and other ministers of the current government have claimed to have been working on saving the river, on multiple platforms.

As seen from the table, the allocation for National Ganga Plan and Ghat Works under the Namami Gange project has seen a massive drop of almost 68 per cent from Rs. 2,300 crore in the budget estimate (BE) of 2018-19 to only Rs. 750 crore in 2019-20. Similarly, the allocation for Groundwater Monitoring and Regulation has been reduced from Rs. 450 crore in 2018-19 BE to Rs. 260 crore in this year’s budget estimate. For the National River Conservation Program also the budget has been slashed by Rs. 400 crore from the revised budget of the previous year.

According to the monthly project progress report of Namami Gange, as on May 31st, 2019, out of the 298 sanctioned projects, only 99 have been completed and 134 are under progress and out of the total sanctioned amount of Rs. 28,451 crore, only Rs. 6,956 crore has been spent in the past four years which is only 24 per cent of the sanctioned outlay for the programme.

Since the budget session is going on in the parliament and the document is yet to be approved, the officials from National Mission for Clean Ganga refused to respond on the budget cut. Dr. Khuruana said,

The Namami Gange budget allocation should have been more this year, otherwise how will the government achieve its 2020 target of cleaning the Ganga? A large number of projects are still incomplete and many are still at the stage of tendering.

Mr. Raman, however, pointed out,

Since a major chunk of the already sanctioned money is remaining unspent, adding more money to the budget is not going to solve the problem. What needs to be done on priority is to push the project still lying pending for tendering. Money needs to be sanctioned for this. Also, the government needs to identify and address the lacunas in the institutional and implementation mechanisms and processes, in coordination with state and district governments to actually roll out the planned initiative. Planning and completing this needs considerable coordination between various local bodies. The institutional and technical capacities of the local bodies, both urban and rural, are very limited in this area too, which would require a sustainable solution to begin with.

Talking about the reductions in the budget on important schemes for water conservation, Dr. Khurana highlighted,

In terms of budget, with all the scarcity that is happening and the ministry rooting for the Jal Shakti Abhiyan to make water conservation a people’s movement, the amount allocated for water conservation is quite low which is very disappointing. Most of the towns downstream of Ganga, according to the Central Pollution Control Board (CPCB), have water completely unfit for drinking or bathing. The poor river quality reflects the lack of effective implementation of projects to clean and revive the Ganga.

While the finance minister did not share the central government’s plan to rejuvenate the Ganga and restore its natural flow, it mentioned about an increased allocation for Ganga Waterways to set up two more multi-mode terminals at Sahibganj (Jharkhand) and Haldia (West Bengal), to be built in the ongoing financial year. Finance Minister Sitharaman also said that the government targets to increase the cargo volume on Ganga four times in four years. In line with the announcements, the allocation for the Inland Water Transport Authority of India has been enhanced by Rs. 249 crore, that is from Rs. 508 crore in 2018-19 BE to Rs. 757 crore in 2019-20 BE. However, as per the experts, these developments would adversely affect the river and the biodiversity dependent on it.

Talking about the damage being caused by river transports, Ram Dheeraj, a Ganga expert and activist highlighted that the multi-modal commercial river navigation terminal already operating on Ganga in Varanasi since November 2018 is posing threat to the Gangetic Dolphins and other aquatic animals. He said,

The Ganga does not have enough water to contain the large vessels but still, these transports are operating. This is not only causing riverbed erosion, but the strong vibrations of these vessels and loud noises are harming aquatic animals like dolphins and sea-horses.

In a country where more than 21 cities are set to run out of water by 2020, affecting about 10 crore people and more than half of the country’s water sources are depleting, the reduction of budgetary allocation is a disappointment. This only shows that water has still not become a priority for the government.

#BigMumbaiCleanup: Mumbaikars To Come Together For A Massive Cleanliness Drive At 100 Locations Across The City