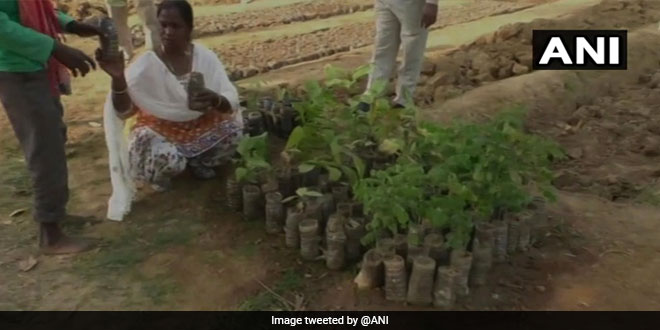 New Delhi: According to the UN Environment, approximately one million single-use plastic bottles are bought every minute around the world. Moreover, each plastic bottle may take up to 700 years to decompose. In a bid to control the menace caused by the growing plastic bottle waste, Chhattisgarh’s district forest department has come up with an eco-friendly solution. Waste plastic bottles in Ramanujganj district, a part of Ambikapur division, are being recycled to plant saplings in the town’s nursery with the help of previously unemployed women workers.

The initiative, a brainchild of the district forest officer, Pranay Mishra serves the twin objectives of recycling plastic bottles and helping women of the district to earn a living.

Till date, we have managed to prepare about 3000 such flower pots using old plastic bottles. Our plan is to sell these plants to generate revenue for women employed in this work. This activity doesn’t require any skilled labour and the local women are enthusiastically taking part in it. The women are getting employment through it and we estimate that this plastic container being used for saplings will last for about two years, he added.

Chhattisgarh: Under an initiative by Divisional Forest officer Balrampur Pranay Mishra, waste plastic bottles are being used to plant & grow saplings at Ramanujganj nursery. He says "Prepared around 3000 plants. This also provides employment. We pay them on a daily basis" (07.12) pic.twitter.com/2XRkOOjo5o

The nursery started using the discarded plastic bottles for planting saplings after a plastic ban was imposed in the state in 2016, which prohibits the use of polythene bags normally used to plant saplings.

After the administration banned polythene in 2016, we adopted this technique where the bottles are brought here from various parts of the state and our workers turn them into sapling pots either at their homes or at the nursery itself. This is done by cutting the plastic bottle and poking two holes to pass a wire. Soil, cow dung and manure is then filled in the bottle, the sapling is put in it and lastly, it is covered properly, explained the Nursery manager, Lalan Sinha.

The women who are working as part of this initiative are not only responsible for planting the saplings but also arrange for the discarded plastic bottles to earn their daily wages.

We collect the bottles from nearby cities like Ambikapur, and bring it here. The bottles are then cut and a sapling is planted by filing it with fertile soil. Other parts of the bottle are also fully utilised, explained Amarlata Minj, one of the women working at the nursery.

This is not the first time that an initiative to fight plastic waste has been initiated in Chhattisgarh. The city of Ambikapur had earlier launched the ‘Garbage Café’ in October, where free food is being provided to people in exchange for plastic waste. The tagline of ‘Garbage Café’ says, ‘More the waste better the taste’.

Furthermore, in the Swachh Survekshan 2019, Ambikapur was also adjudged as the second cleanest city in India, jumping from 17th rank in the 2018 survey.

With inputs from ANI .