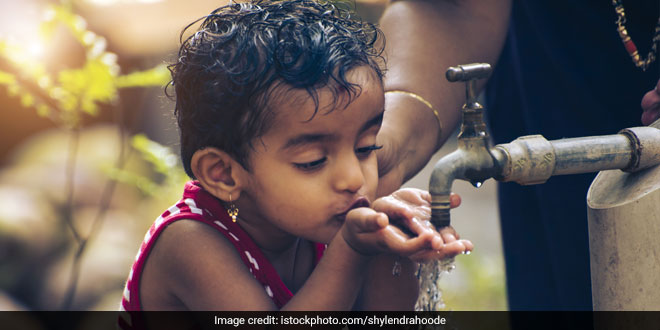 Mumbai: Swachh Bharat Abhiyan, launched by Prime Minister Narendra Modi in 2014 promised a cleaner and healthier India. Sanitation related issues, right from open defecation, waste management to water pollution were included under the ambit of India’s largest ever cleanliness programme. The effectiveness of the Clean India Mission was highlighted in a recent report by Ministry of Drinking Water and Sanitation found that cases of diarrhoea among children living in non-open defecation free (ODF) areas are 46 per cent higher than ODF regions.

Also Read: A Number Of Indian Children Continue To Fall Prey To Malnutrition And Stunting, And Safe Sanitation Practices Could Rescue Them From Their Plight

Lack of basic conditions such as access to safe and clean water, sanitation and hygiene has a direct and adverse impact on peoples’ health causing diarrhoea and cholera. Microbiological contamination of drinking water is linked to subsequent diarrhoea among children, says Arundati Muralidharan, Manager-Policy at WaterAid India.

There is a direct and critical role of hand hygiene and cleanliness in reducing deaths due to diarrhoea and other infection related deaths and thereby curbing maternal, neo natal and child mortality.

With just a year remaining to the Swachh Bharat Abhiyan deadline of October 2, 2019, here are some areas to focus on to sustain the fight against diarrhoea’s what citizens, can do to enhance the sanitation and cleanliness quotient of the country.

In a massive outbreak of gastroenteritis, 10 people died in Guntur district of Andhra Pradesh this year in February and around 900 people were hospitalised at the Guntur Government General Hospital, after drinking water supply in the town was reportedly found to be contaminated. Diarrhoea is a major cause of death, especially among young children in low-income countries like India and one of the most common causes is contaminated water.

In India, sources of drinking water include surface water (like lakes, rivers, etc), household water pipe connection, public taps, groundwater and rain water harvesting system. With major rivers like Ganga and Yamuna suffering from severe pollution crisis, uranium contamination in groundwater in 16 states, water pipe channels leaking and bursting, the water supplied in homes are at a risk of having heavy contamination levels.

Also Read: How Not Having Access To Safe Sanitation And Hygiene Is Killing Millions In India

Diarrhoea has a direct link to the practice of open defecation, as it is primarily caused by pathogens from faeces that have not been disposed of properly. Die to lack of cleanliness and toilets where an increasing number of people have been victims to preventable deaths, which could have been avoided by simply maintaining hygienic living conditions. In Pune’s Warje suburb, instances of open defecation reduced by over 80 per centand cases of diarrhoea reduced from over 450 to less than 100 and no diarrhoeal deaths were recorded within a year of installation of community toilets.

Also Read: The Hidden Dangers In The Life Of People Without Toilets

After having toilet access, one must also ensure its cleanliness. Cleaning the walls, floor and door of the toilet are regularly, cleaning and washing the seat (if there is one), filling cracks in the walls, floor, door and roof and ensuring the latrine is properly ventilated are some of the basic steps one can follow to ensure toilet sanitation. Besides having toilets, improvement in overall sanitation and cleanliness can help children develop healthier minds and bodies.

The organisms causing diarrhoea are transmitted from person to person through food and water contaminated with faeces, or through person-to-person contact. Hand washing after toilet use and before, or after cleaning up baby, and before preparing and eating food, can therefore reduce the risk of diarrhoea. Hand washing can be promoted through group or individual training on hygiene education, germ-health awareness, use of posters, leaflets, comic books, songs, and drama.

According to a UNICEF report, hand washing with soap alone can cut the risk of diarrhoea by at least 40 per cent and significantly lower the risk of respiratory infections. Clean home environments and good hygiene are important for preventing the spread of both pneumonia and diarrhoea .

Keeping the kitchen clean is an important aspect of hygiene to prevent diarrhoea. This may include storing food in a clean place away from children’s and animal’s reach. Covering food, keeping plates, cooking pots and utensils clean, washing hands with soap and water before cooking are some of the other kitchen rules one must practice.

It is essential to manage wet waste as it keeps insects and other pests away if the trash is stored in covered containers.

Integrating the aforementioned practices in day-to-day life is not challenging, but sustaining the practices related to clean water, hygiene and sanitation is. Bringing about a behavioral change while improving the infrastructure is equally important. With the installation of water and hygiene facilities, people should be taught on how to use them effectively. Maintaining the infrastructure is also necessary to avoid any kind of contamination or infection.

Independence Day Special: Five Things India Should Do To Avoid A Water Crisis