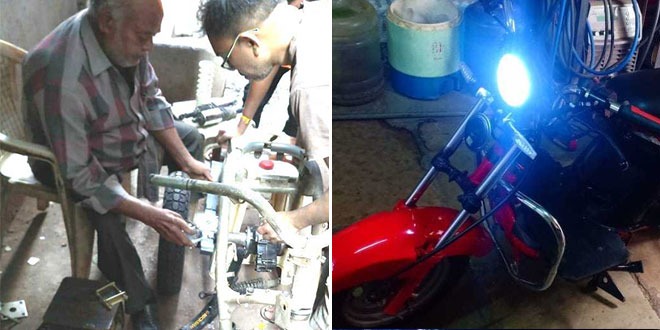 New Delhi: ‘A world is so average, it doesn’t take much to be a genius, just do a little extra’, says the popular saying and this 60-year-old man from Gujarat has proved it right with his recent innovation. Meet Vishnu Patel who was born with polio and hearing impairment and couldn’t manage to complete his education after the fifth standard. But has given world its much needed invention-cum-solution – low-cost electric vehicles built using automobile and electric waste to combat the problem of rising air pollution and reduce the load from our overflowing landfills and thereby giving differently abled people a comfortable yet green mode of transport.

The Start of A DIY Invention

Vishnu Patel used to handle a business of electric wiring and repairs, last year; Mr Patel took retirement and started devoting his time to watch a lot of ‘do-it-yourself’ (DIY) videos on YouTube. One fine day he came across a video on building vehicles from industrial scrap and that was Mr Patel’s eureka moment – inspired by how easily a vehicle can be built using all things waste, Mr Patel started on the journey to build an eco-friendly two-wheeler utilising waste from his home and local scarp shops.

One of the DIY videos of building bikes using waste caught my father’s attention last year and he expressed his wish to build a similar bike but with zero-emission, the one which does not use fossil fuel, instead, is powered by a battery and is made using electric and automobile waste. One of the major reasons why my father decided to make eco-friendly vehicles was to reduce his carbon footprint and inspire others to do the same.

Using an old bike’s frame as the main body of his first eco-friendly two-wheeler, wherein the petrol tank was replaced with a lithium-ion battery system, brakes, clutches, tyres and a wiring system, all purchased from a local scrap shop and fitted at the required places. The 60-year-old man who couldn’t complete his education gave the world a green invention at a mere cost of Rs 27,000 which can change the fate of electric vehicles in India.

Talking about the experiments and costing of the e-vehicles, Nikhil added,

The first prototype was built at a cost of Rs. 27,000 because the body of the old bike was used which was there at home only, the next was an electric three-wheeler built at a cost of Rs 40,000 and everything was brought from a scarp dealer. Initially, my father also experimented with batteries that are fitted in mobiles and laptops to make a battery pack for the vehicles, but it didn’t work. Then we bought two very costly lithium-ion batteries from Assam. After exploring the market a bit more, we found some places in Delhi and Gujarat from where we are currently sourcing our batteries.

After completing the prototype of two electric vehicles, Vishnu Patel established a small manufacturing unit last year at his home in Surat, Gujarat, for producing more electric vehicles and fulfill his dream of a green and cleaner India and making commuting easier for people with different abilities, like him.

Till now, he has built five battery-operated two-wheelers and four three-wheelers that Mr. Patel fondly calls ‘e-bikes’. The electric vehicles manufactured by him can be charged fully in about four hours with the help of a five-ampere socket at home and can run for about 45 kilometres at the speed of 40-45 kilometres per hour, on a full charge.

Being a differently abled person himself, my father struggled a lot in arranging for our commutes to school, relatives’ place, and other places. When he made his first electric bike, he told me that he will customise his next bike for people like him so that they don’t have to struggle as he did. While there are options available for physically challenged people to choose from when it comes to scooters, they are usually quite costly. My father has built a sturdy yet cost-effective and green alternative.

Currently, Mr. Patel is waiting for an aid from a financial institution to take his dream ahead and looking to develop it into a successful business. He is also currently working towards building a couple of new variations of e-bikes for people with different kind of disabilities. Mr. Patel has not launched these vehicles in the market for sale yet and has been testing these on various routes in the city.

Mr Patel son signs off with a message,

If my father can do his bit to make the planet green, each one of us sitting there can do something to save the planet. My dad’s ultimate goal is to make cost-effective mode of transport for people with disabilities and inspire everyone on reducing their carbon footprint by swapping their transport with an eco-friendly or greener alternative.