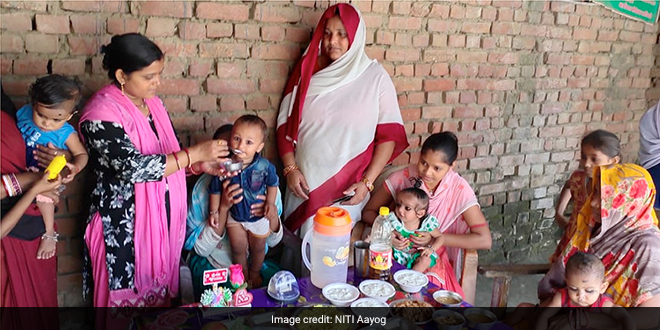 New Delhi: Maharashtra, Andhra Pradesh and Gujarat have been ranked as the top three states among larger states in terms of the overall implementation of the Centre’s flagship Poshan Abhiyaan, according to a Niti Aayog report. Sikkim was the best performer among the small states. The report titled ‘Preserving Progress on Nutrition in India: Poshan Abhiyan in Pandemic Times’ further said that 12 out of 19 large states had an implementation score of over 70 per cent.

While Dadar and Nagar Haveli and Daman and Diu topped among Union Territories (UTs), Punjab and Bihar were the lowest performers among larger states in terms of the overall implementation of Poshan Abhiyaan, as per the government think tank report.

In terms of WCD programme coverage, many states and UTs have distributed take-home rations (THR) to all beneficiaries, according to the report.

Noting that overall fund utilisation under Poshan Abhiyaan is low, with less than 50 per cent of funds utilised in 23 states and UTs, the report said, “There is an immediate need to accelerate its use through channels like recruiting human resources, procurement of devices”.

The report stressed the need of accelerating the use of funds released for Poshan Abhiyaan and ensuring an adequate number of health facilities and supplies.

It also suggested expanding coverage and improving the quality of essential health and nutrition interventions by continuing to strengthen the ICDS (Integrated Child Development Scheme) and health platforms.

Operationalise the Convergence Action Plans (CAPs) so that the convergence is outcome-oriented and interventions across sectors reach the target beneficiaries, the report suggested.

It noted that efforts to increase household demand for services are also going to be central to achieving coverage, therefore, demand creation to access and use of health and ICDS services should be a key focus of the social and behavioural change component (SBCC) pillar of Poshan Abhiyaan in 2021.

The report suggested that among the many ICDS services, priority areas for capacity building should include strengthening the quality of growth monitoring and home-based counselling.

There is a need to strive for data management at the state and UT level to track their standing with respect to the objective of the Abhiyaan as well as to enable inter-state comparison on performances, it emphasised.

To continue progress under the Poshan Abhiyaan, the report said gaps in HR positions must be closed, particularly in states where less than half of the required positions are filled.

The report covers the January to December 2020 period, which mostly coincides with the active implementation of mission activities, following a long period of aligning actions across multiple ministries, development partners, states, districts and communities.

In 2018, the Centre launched its flagship programme, the Poshan (Prime Minister’s Overarching Scheme for Holistic Nourishment) Abhiyaan to draw national attention to and take action against malnutrition in a mission mode. It is a scheme under the ICDS umbrella which converge with other programs and service delivering nutrition interventions during the first 1,000-day period.

The mission attempts to deliver a high-impact package of interventions in the first 1,000 days of a child’s life; strengthen the delivery of these interventions through technology and management; improve the capacity of frontline workers (FLWs); facilitate cross-sectoral convergence to address the multi-dimensional nature of malnutrition, and enhance behaviour change and community mobilisation.