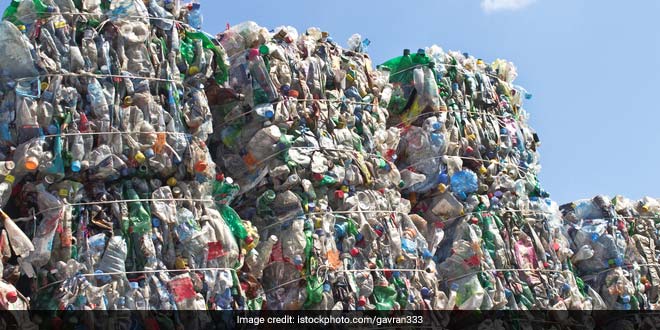 New Delhi: Before the Maharashtra government’s ban on the use, storage, sale, distribution and transportation of plastic items comes into effect on June 23, the Brihanmumbai Municipal Corporation (BMC) initiated a plastic collection drive on March 23 for people to deposit their plastic items – before the deadline. BMC’s plastic collection drive saw massive response – the civic body has so far collected over 1.42 lakh kg of banned plastic items from all the 24 wards across the city. But the city corporation, which is still aggressively collecting the plastic from collection bins and dry waste collection centres across the city, has not been able to put a mechanism to recycle the collected plastic.

According to the civic officials, the recycling of plastics should be carried out in environmentally sound manner, as per the Plastic Waste Management Rules. “To sell the collected plastic, we have reached out to a couple of recyclers registered with Maharashtra Pollution Control Board (MPCB). These registered recyclers have asked for direct delivery of the plastic to their plants.  On this backdrop, we need to take a calculative decision that is financially viable for the Brihanmumbai Municipal Corporation… as the transportation costs are huge,” said one of the BMC officials.

We are currently storing the collected plastic waste in the dry waste segregation centers. We are working on a viable solution on how to transport the plastic waste to the registered recycling agencies, said Kiran Dighavkar, Assistant Municipal Commissioner, Brihanmumbai Municipal Corporation.

Towing the government line, plastic bottle manufacturers have approached the civic body for recycling of the collected banned plastic in the city. While the Brihanmumbai Municipal Corporation (BMC) has collected over 120 tonnes of banned plastic since April, it has no mechanism available to recycle this waste.

However, as part of the Extended Producer Responsibility (a policy approach under which producers are given a significant responsibility for the treatment or disposal of post-consumer products), two firms have approached the civic body asking for segregation centres across the city. These companies will then later transport and also recycle the plastic, added Kiran Dighavkar.

According to the data provided by the Maharashtra Pollution Control Board (MPCB), there are over 400 registered agencies with MPCB that can recycle plastic as per the government norms. Of the 400, only 40 to 50 are located in Mumbai.

One viable option at our disposal is to crush the banned plastic in a crusher. However, a decision needs to be taken on what should be done of resultant plastic granules from this process. However, recycling is not the only option but the collected plastic can also be used by cement industries to mix the plastic with cement in their manufacturing units. And to use plastic waste in road construction works is also under consideration, said an official of the civic body.

According to environmental experts, a good option to destroy plastic is to burn it in a cement kiln, use in the construction of tar roads or disintegrating plastics by processing into the basic chemicals which are harmless – a few options mentioned under solid waste management rules. However, the recycling of plastics should be undertaken strictly in accordance with the Bureau of Indian Standard specification, entitled – The Guidelines for Recycling of Plastics.”

According to the data provided by the BMC, of the 1.42 lakh kg of banned plastic that has been recovered, the highest amount of plastic was collected from Bandra – over 30,000 kg.

The annual plastic waste management reports of the Central Pollution Control Board (CPCB) states that the estimated plastic waste for Maharashtra increased from 1,045.24 tonnes per annum in 2011-12 to 4,69,098 tonnes per annum in 2015-16. It has one of the highest plastic consumption across Indian states. The state pollution control board’s decision to ban plastic (banned items include all kinds of plastic bags (with or without handle), disposable cutlery items made of plastic and thermocol such as plates, cups, glass and bowls) came as a big step but it is yet to be seen how the state will manage to recycle the plastic waste effectively. With the ban, Maharashtra become the 18th state in the country to ban plastic.

Maharashtra Plastic Ban: BMC Organises Special Classes In Mumbai On How To Cope With The Plastic Ban