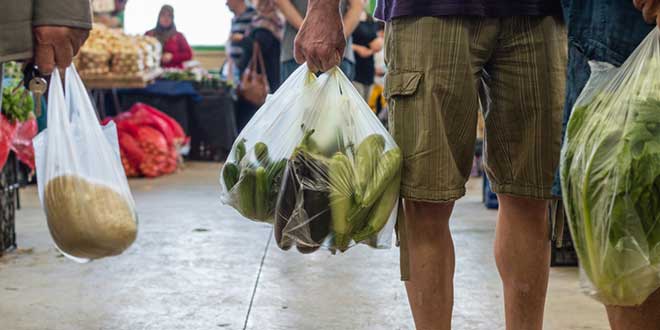 New Delhi: The residents of Mumbai may be spared from shelling out a hefty penalty of Rs 5000 for violation of the plastic ban (by carrying a plastic bag or taking one from a vendor), which will come into effect on June 23 if the suggestion of Brihanmumbai Municipal Corporation (BMC) is accepted by the civic body’s Law and Revenue Committee. Raising the concern that a common man will not be able to pay Rs. 5000 as fine, the BMC has proposed to reduce the penalty to Rs 200 for first time offenders, when it comes to citizens. While the manufacturers and the shopkeepers will continue to fall under the Rs 5000 bracket for first time violation of the plastic ban.

Both the implementers and consumers suggested that penalties need to be in an affordable range. The fine of Rs 5,000 is huge, and practically no one carries that much money with them so they cannot afford to pay the penalty. Asking for such a big amount as fine could also lead to conflicts between citizens and inspectors of plastic ban squad or BMC officials… and we don’t want that to happen. As per the rule, the BMC is fully authorized to decide on the fine amount… though the state government had passed a law banning single-use plastic items and recommended a fine up to Rs 5,000. The city corporation’s ultimate aim is to reduce the plastic usage and making people aware about the health hazards of plastic waste.

“The proposal to reduce the fine has been submitted to the BMC’s law committee. After its approval, the new rates will be applicable once the plastic ban becomes effective on June 23,” Nidhi Choudhary further added.

So far this concern regarding the fine amounts being hefty has only come in from Mumbai, when contacted by NDTV the civic bodies of Pune and Nagpur said that they plan to continue with the fine amounts as per Maharashtra government’s notification – Rs 5,000 for the first time offense, Rs 10,000 for violation the second time, and Rs 25,000 for the repeat offenders.

Though, the fine amount has been proposed to reduce but it’s still best for people to not violate the ban and get rid of the existing stock of plastic lying with them before the deadline of June 23. We (BMC) are still collecting the plastic from collection bins and dry waste collection centres across the city, said an official of the Brihanmumbai Municipal Corporation.

Some environmentalists have reacted positively to the proposed deduction in fine, and called it a rational decision.

BMC is implementing the plastic ban for the first time and considering the economic status of majority of population, Rs. 5000 penalty would have been harsh and difficult to implement. So I consider the decision to reduce the penalty to Rs 200 is a rational decision. Most important thing is the uniform implementation. If the decision is implemented in letter and spirit, it will go a long way in reducing plastic pollution. BMC should patiently implement the plastic ban and there should be vigilance even on the officers who are implementing the plastic ban. If it is implemented in this manner, people will not violate the ban as Rs 200 is also not a small amount for majority of population. And you can always review the penalty amount based on experience, said Environmentalist, Dr. Milind Kulkarni.

Actually fine is not the solution to curb plastic waste but sometimes it is required because some people are habitual and don’t want to co-operate in any good drive, and even try to put hurdles. It is a good idea to start the fine at Rs 200, as this will not lead to conflicts of any sort between the authorities collecting the fine and the offenders. However, the reduced fine would help decrease the pain of innocent people who unknowingly commit the mistake of carrying the banned plastic items. I recommend that the penalty amount should be used for organising awareness programmes, and the BMC can also gift the alternate eco-friendly bag to victim as a compensation.

I support the reduction in fine by BMC as people belonging to low income groups (living in the slums) will not be able to pay a hefty Rs 5000 fine, and they will definitely look out for reasons (like bribe) to not pay the fine. However, Rs 200 is also deterrent enough for people to stop using single-use plastics. But most importantly, the BMC first needs to ensure that the consumers, for whom they have reduced the fine for plastic ban violations, are aware of the environment-friendly alternatives to banned plastic bags and also have access to use, Swati Sambyal added.

While Chitra Mukherjee, an environmental activist who works as Head of Programmes, Chintan, which is a non-profit organisation that works with wastepickers and other recyclers to convert waste to social wealth, is of the viewpoint that BMC rather than focusing on end consumers should focus on manufacturers to phase out single-use plastics.

I am not for or against the fine reduction but I believe that BMC should work on to reduce the supply of single-use plastics, and the demand will automatically reduce. Furthermore, the BMC should also focus on providing alternatives to plastic, especially to slum dwellers, added Chitra Mukherjee.

Maharashtra government’s March 23 notification issued under the Maharashtra Non-Biodegradable Garbage (Control) Act, 2006, bans the manufacture, sale, transport, storage and use of plastic items including bags, disposable plastic spoons, forks, cups, glasses, containers and thermocol for decoration. As per the notification, those found violating would be penalised Rs 5,000 for the first time offense and Rs 10,000 for violation the second time. While beyond the second chance, the repeat offenders would have to shell out as much as Rs 25,000, which is the maximum penalty that can be levied under the ban. The government gave everyone three months to get rid of their plastic stock and switch to greener alternatives by June 23 when plastic ban would become effective.