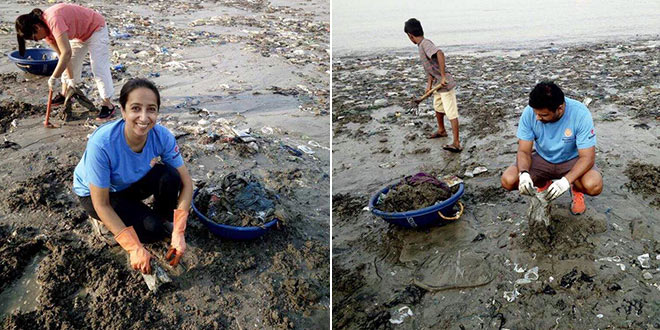 New Delhi: In July 2017, with a hope to enjoy the beauty and calmness of the soothing Mahim beach, Indranil Sengupta and Rabia Tewari moved to their sea facing home in Mahim. But what happened next was completely beyond their expectations. Everytime they would look out of the window, all they would see were mounds of garbage lying on the beach. Saddened with the state of the beach, the couple discussed the issue and decided to take an action. 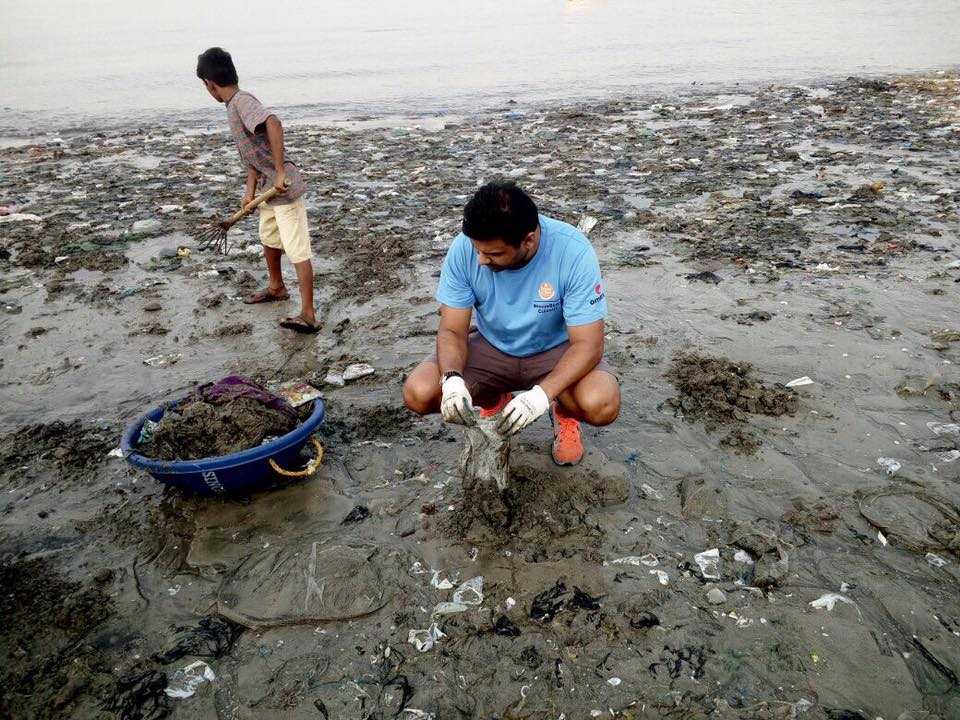 I called BMC (Brihanmumbai Municipal Corporation) helpline and told them about the garbage lying on the beach. Every time I would call them, the person on the other side of the phone would say, we are sending someone to pick up the waste, but no one would come. One day, we both came to a conclusion that BMC will not help us and we will have to do something on our own, recounts Indranil Sengupta, while speaking to NDTV.

Taking inspiration from Afroz Shah, who has taken up the responsibility of cleaning Versova beach in Mumbai, the couple picked up a pair of gloves each and decided to clean Mahim beach. On the first day of the clean up, only two people from the building accompanied the couple, but since then the duo has never looked back. 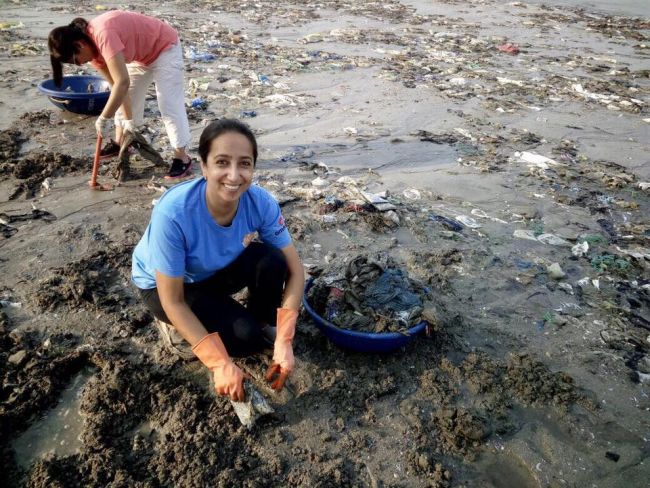 Rabia Tewari, picking up the waste from Mahim beach

No matter how many people come forward, every weekend we go to the beach at 8 AM sharp and do clean up for two hours. It is a ritual for the two of us. We get an average of 25-30 volunteers. It has been 46 weeks, and we received a support from some 100-150 volunteers only on five or six weekends, tells Indranil.

The task for the team is not only to collect waste from the beach, but ensure that sand does not go into waste. Talking about the same, Indranil says,

The plastic that comes on the shore collects the sand. BMC uses rakes to pick up the waste, but with that rakes collect more sand than plastic waste and huge amount of sand goes to the landfill, which we don’t want, obviously. So, to avoid this, either BMC needs to collect the waste manually or use machineries that are able to segregate the waste and sand.

On an average, the team collects 20 tonnes of garbage every weekend. As of today, the duo along with volunteers have collected 650 tonnes of waste from the Mahim beach. Of the total waste collected, 90 per cent is plastic and the remaining 10 per cent is pieces of cloth, shoes, and other kinds of waste. Once the waste is collected, excavators and trucks from BMC come to pick it up and dump it on Deonar landfill. 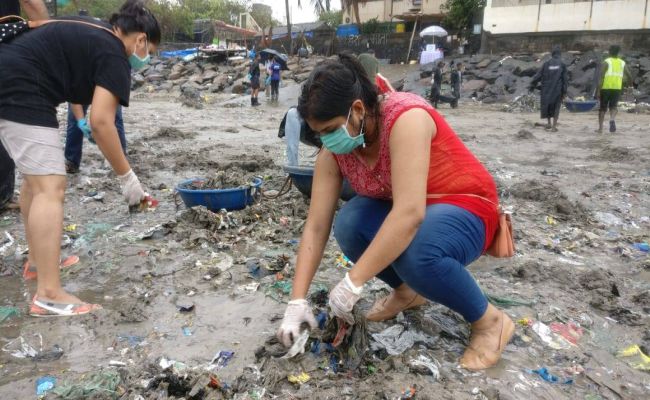 We are regular citizens. We belong to different professions and waste management is not our field. Our understanding of the process of how garbage is collected and disposed was minimal when we initiated the Mahim Beach clean up. Once we started doing it we got to know what are dry waste, wet waste, recyclable and non-recyclable goods, and other things. For a long time we were just collecting garbage for the excavators and trucks to come and pick it and take it to landfills. But now we have started giving waste to a social enterprise that treats plastic waste and recycles it to materials used in making road, tells Indranil.

Amidst all this, the most disheartening thing for the duo is to see the easy way out people have chosen – blaming government. Every time, the couple asks citizens to volunteer, they get a fixed reply ‘This is government’s job, why should we do it?

My question is what all the government will do it. Also, we have created this mess over a period of time and it is our duty to clean it. Civic responsibility is zero these days. Instead of blaming the government, we need to take ground actions, says Indranil. 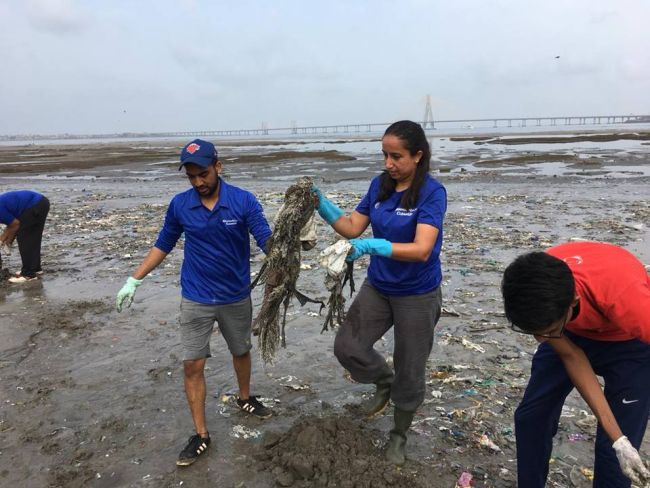 Rabia cleaning the Mahim beach with one of the volunteers

Suggestions From The Warriors And The Future Course Of Action

When the couple started, the problem was the backlog of 6-7 months of no cleaning. The first and foremost solution to the problem is regular cleaning of the beaches. The duo, who is thankful to BMC for supporting them, suggests increasing the manpower and machineries.

There is only one excavator that takes care of a stretch of almost four kilometers – from Mahim to Prabhadevi. On paper, 35 people are marked for the cleanup, but only 19 are actually on ground. 19 workers, one excavator and two trucks cannot clean the beach, says Indranil.

Apart from this, the Swachh warrior thinks that someone needs to take the onus of Mithi river which contributes to the major share of waste that reaches Mahim beach. 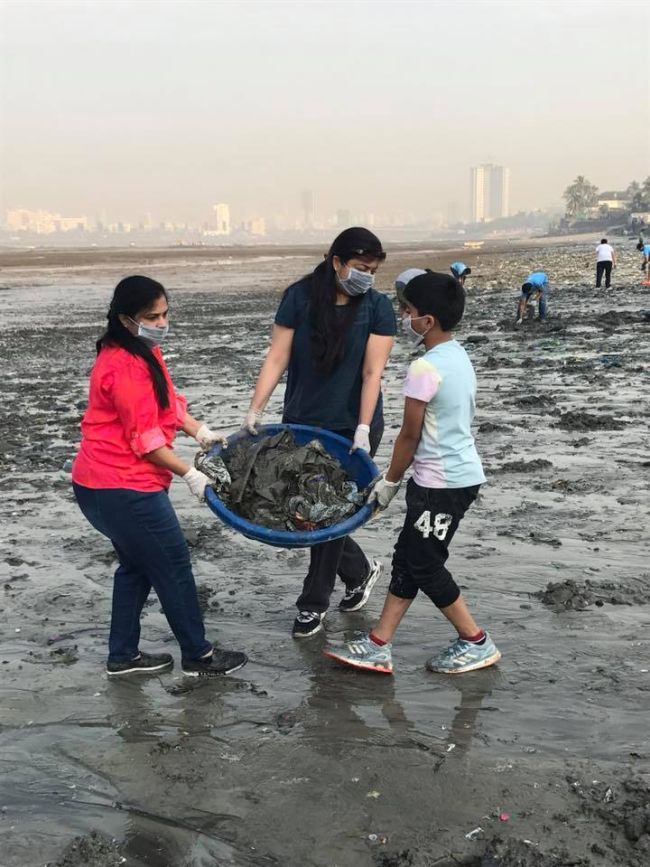 Not Just Clean Up, But A Swachh Life Too 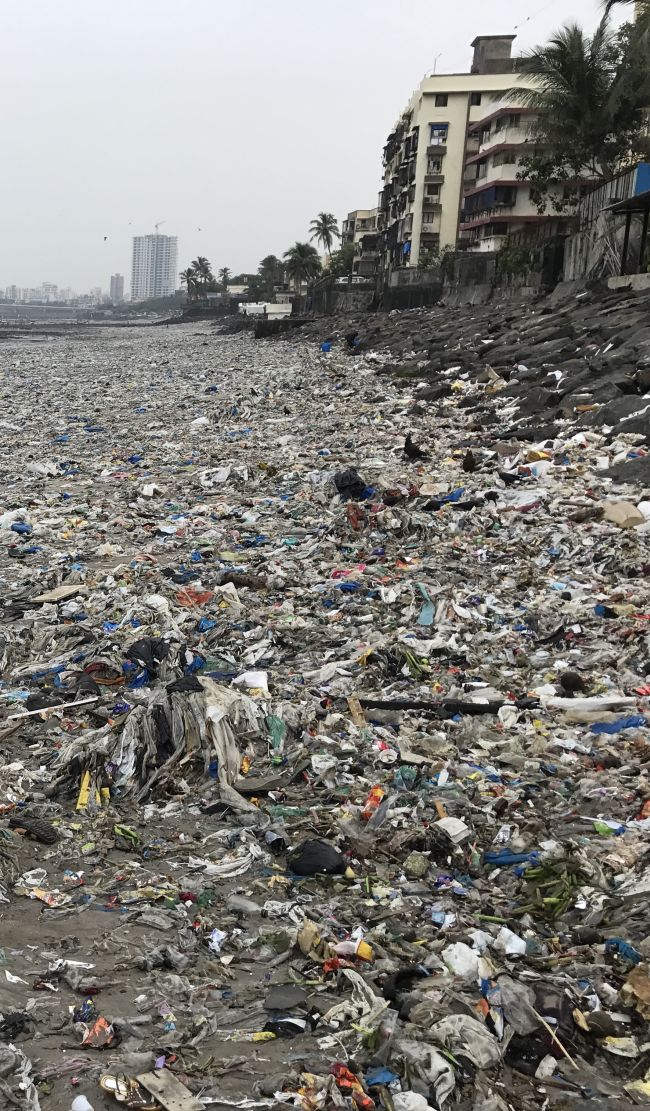 Throwback to the first month of cleaning Mahim beach