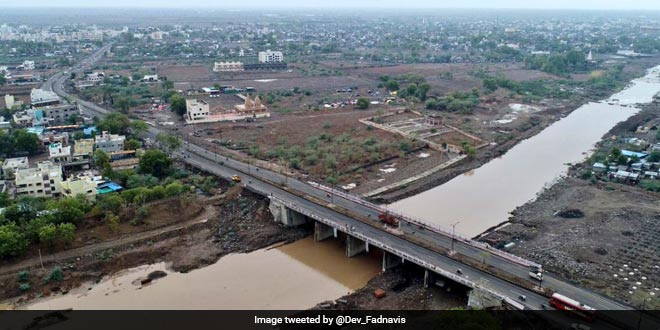 Mumbai: Trace the history and one will find innumerable movements led by the citizens, from Quit India movement, Chipko that saved hundreds of trees to the modern-day cleanliness drive led by Afroz Shah in Mumbai’s Versova Beach. Joining the likes of these revolutionary movements is Maharashtra’s Akola district. 40,000 people in the district worked tirelessly for six months to revive the Morna river, which was once reduced to a drain due to rampant dumping of waste. The cleanliness drive titled ‘Mission Clean Morna’ that began in January with 8,000 people has now resulted in an uninterrupted flow of water in Morna.

For the last six months, every Saturday people from the district have been religiously visiting the river and dedicating a few hours to remove all kind of garbage including weeds, plastic, wild grass and hyacinth. The 173-kilometre-long Morna river, a major tributary of Purna river (tributary of Tapti), is the main water source for Akola district, located around 240 km from Nagpur.

Of the total stretch, around eight kilometres of Morna river passes through Akola. In one of our evaluation processes under Swachh Bharat Abhiyan, we examined the river and found out that it is not impossible to rejuvenate the river. Thus, we launched the massive cleanliness drive on January 13. We were confident of achieving this ambitious feat as on the very first day when 8,000 people had come forward and cleaned 3 kilometres of the river, said Astik Kumar Pandey, Collector, Akola district

Also Read: This 23-Year Old Has Developed A Machine To Collect 40,000 Tonnes Of Plastic Trash In The Great Pacific Garbage Patch In 5 Years

Within a month of the cleanup drive, Prime Minister Narendra Modi had lauded the people of Akola in his 40th edition of Mann Ki Baat. After appreciation from the Prime Minister and Chief Minister Devendra Fadnavis, the number of participants increased two fold.

The Akola administration provided all the basic amenities including gloves, cleaning equipments to the citizens to make the cleaning process safe. The drives would usually begin by 7 am and end by lunchtime. Thousand kilos of waste would be removed every Saturday. The waste collected would be transported to the landfill by the administration workers.

Talking about the challenges faced in the process, Mr Pandey says there were many, but people’s determination and hard work defeated them one by one,

There is a bridge right above the river and people would throw garbage recklessly in the river. First, we stopped the littering menace by putting fences on the bridge and increased the number of bins on the bridge. Secondly, we asked the people residing close to the river to not wash clothes and throw their household garbage in the river. And thirdly, we have already started the process of diverting household sewage to the waste treatment plant, added Mr Pandey.

There are 33 nullahs (drains) that meet the river at different points. Presently, there is no other option but to let the sewage flow in the river. The administration is currently developing a waste water treatment based on the National Environmental Engineering Research Institute’s (NEERI) patented technology of phytorid wastewater treatment. The treatment plant will not only stop the water from going to the river but will also recycle it. The recycled water will be given to a thermal power plant on the outskirts of the district. The plant will take two years to become functional said Sanjay Khadse, Morna river project’s nodal officer.

The river is now 100 per cent clean and free from all kinds of waste and people have stopped throwing litter in the river. The people’s movement has also made it to the Golden Book of World Records, an international book of records, for largest public participation in river cleaning and the largest women-driven initiative.

Chief Minister Fadnavis ‘saluted’ the citizens for their efforts towards cleaning the river and said that success can be seen in the fact that the river is brimming with water following first rain of the season.

“Our salute to every citizen who worked hard for #CleanMorna mission! After the river was cleaned with people’s participation, the water is flowing without any interruptions and brimming with water. Congratulations to all the participants,” he tweeted.

Terming the experience as a ‘miracle’, he dedicated the title to the citizens and said it was possible only because the people of the district established an emotional connect with the river. Everyone, from women, children, students, businessmen, doctors, teachers truly supported and owned the initiative.