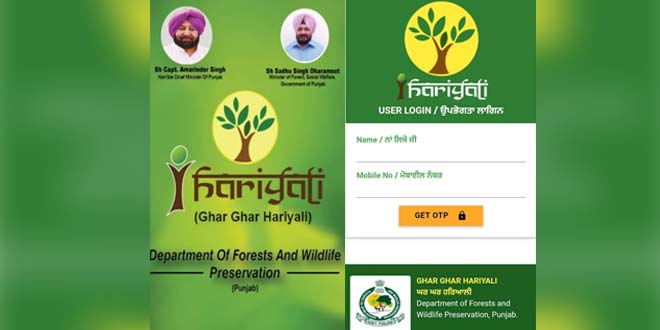 New Delhi: The problem of air pollution is prevalent in Punjab as eight cities of the agrarian state were listed among the most polluted in terms of air pollution in India over a period of five years from 2010, according to a report released by Central Pollution Control Board in 2017. To curb air pollution, the state government has taken up a number of initiatives since past one year, from imposing a ban on stubble burning to setting up plants to utilise paddy straw to produce bio-gas, to endorsing harvest machines for effective paddy straw management. Now to provide clean and fresh air, the state government has launched a novel initiative – ‘Ghar Ghar Hariyali’ (Green Cover Everywhere) campaign, under which the government will provide free plant saplings through a mobile application ‘i-Hariyali’. The aim of this campaign is to provide clean and fresh air to the people of Punjab as well as contribute towards improving the green cover in the state.

As part of this campaign, every resident of Punjab would get three and every household would get a maximum of 25 saplings of varied types free of cost.

This year, the government is planning to deliver around 20-25 lakh saplings, which would help provide green cover to around 4-5 lakh households in the state,” said an official of the Department of Forests and Wildlife Preservation, Punjab.

The ‘i-Hariyali’ app can be downloaded from the Android Play Store for free. The users can book a plant sapling (Sheesham, Neem, Arjun, Harad, Behra, Anwla and Jamun, to name a few) of their choice from a nearby government nursery. Once the booking is done, the contact number of the concerned employee of the nursery or the forest guard will be displayed on the mobile phone of the person. The user can then contact the nursery or forest guard to collect the sapling. The app, which was made available on the App Store on June 18, has so far been downloaded by over 50,000 users. The app is currently not available for iOS devices.

However, with a free plant sapling comes responsibility as well – a condition of proper upkeep and care of the saplings has also been imposed by the state government. The officials of the Department of Forest will keep a check if the sapling has been planted or not, and if it is being taken care of, if already planted. 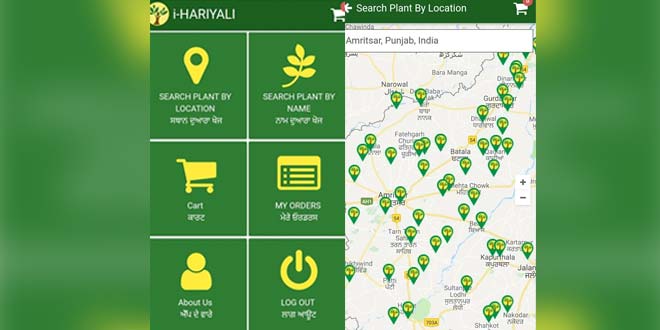 The app has been designed to be used across all areas in the state. It carries details of all the available government nurseries. The residents of Punjab are actively downloading this app, and we have already started getting orders, said Charanjeet Singh, Divisional Forest Officer, Ludhiana.

This is a unique app launched by Forest department… it enables a resident to choose the plant of his choice whether Timber, Medicinal, Fruits or ornamental shrubs. The green cover is depleting in the Jalandhar district (a similar pattern can be found across the other districts in the state), I hope that this app would help in enhancing the tree cover, thus curbing the environmental pollution,” said Varinder Kumar Sharma, Deputy Commissioner, Jalandhar.

According to Punjab’s Forest Minister Sadhu Singh Dharamsot, the government is hopeful that the app will help inspire people to plant more saplings (during the Monsoon season) to save the environment from the menace of air pollution, and ensuring a clean, green, healthy and robust Punjab.

I urge all the stakeholders to plant the saplings in large numbers to mitigate the adverse impacts of air pollution. We are looking forward to build a massive social movement involving every citizen of the state to ensure a clean and green Punjab. The ‘Ghar Ghar Hariyali’ campaign is part of the Punjab government’s `Tandarust Punjab’ (Healthy Punjab) mission to make Punjab the healthiest state in the country, said the Forest Minister.

Understanding the concerns that air pollution leads to many health hazards and even deaths from heart disease, stroke and lung cancer, the Punjab government has come up with this initiative to plant more trees. The fact that trees help improve air quality is scientifically backed by a study done by US-based The Nature Conservancy (TNC), which observed that an average reduction of particulate matter near a tree was between 7 percent and 24 percent. The study further stated that trees remove gaseous air pollution primarily by uptake via leaf stomata (tiny openings in leaves), though some gases also get removed by the plant surface. However, it is early days for ‘Ghar Ghar Hariyali’ initiative and it will be a while before its impact in improving the green cover of the state and reducing air pollution can be proven.