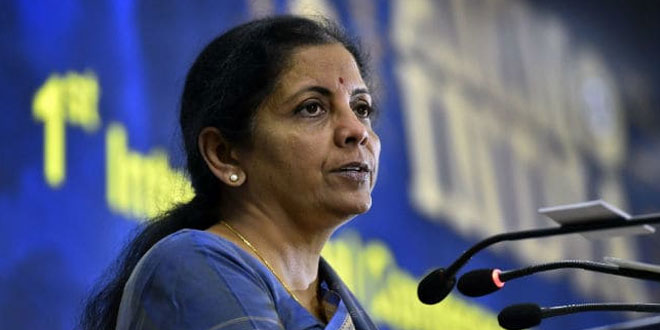 New Delhi: Finance Minister Nirmala Sitharaman delivered her first Union Budget today (July 5), giving a glimpse of the five-year vision of the Swachh Bharat Abhiyan 2.0. Ms. Sitharaman asserted that the government wants to ensure a pollution free India with ‘green Mother Earth and Blue Skies’. She also said that the government in this term will focus on water, be it water management, cleaning rivers for an efficient supply of water. When it comes to the hygiene and sanitation condition of the people, the FM noted that the government has constructed 9.6 crores toilets at home in the last five years.

With a total allocation of Rs. 12,644 crore, the Swachh Bharat Mission remained a core scheme in the government’s agenda. After Ms. Sitharaman’s presentation of the budget in the parliament, Prime Minister Narendra Modi congratulated Ms. Sitharaman and her team and labeled it as ‘Green Budget’, as it focuses on the environment, electric mobility, solar structure, and pitches for a green and clean energy.

I don’t see a lot on the budget on waste. Although, Goods and Services Tax (GST) on plastic and recycled products has been reduced from 18 per cent to 5 per cent, which may greatly benefit the recycling industries and have a huge impact on waste management.

Ms. Sambyal further noted how, under the Swachh Bharat Abhiyan 2.0, the government wants to focus on sustainable waste management by offering solutions like waste to energy plants in villages.

I don’t think that is a sustainable option as villages don’t generate a high amount of non-recyclable waste. Bio degradable waste management is not needed in villages as they don’t have that challenge but instead the waste challenge in villages is mainly plastic packaging and other plastic litter. I think this could’ve been worked out in clusters of villages by implementing workforce that would cater to sorting and channelising it for recycling or for making roads. I think there are much better solutions than waste to energy plant, considering even in urban areas these plants are not the main solution as a waste treatment process.

I don’t think villages would benefit from waste to energy plants, they should try for a more holistic approach for Swachh Bharat Abhiyan.

What was really encouraging was to hear through the budget was the green agenda for the country. Government’s report card on sanitation and 9.6 crores toilets construction is quite impressive.

Desire of government to provide water to the citizens is important thing to note. Unless we can provide our citizens water, we have issues. Various areas of water – water efficiency, transportation of water, drinking water, all need attention and the budget talks about that. If the government gives the focus to the water as it did to sanitation in the last term, we could indeed see success there.

The government didn’t only mention the decrease in custom duties on electric vehicles but also in terms of individual gain on the loans on electric vehicles were important. This tells me that government’s FAME programme and EV adoption remains an important part of their agenda. The possibility of the jobs generated by these sectors, green jobs, will be deserving attention.

The budget this year has taken care of all parts of the society. The way the government has come out on solar power, electric vehicle, agro-fuel as well as how to take care of the future of climate, I’m happy that their vision is clear. I’m sure with the focus on infrastructure, water and technology, the country will transform into the India we dream of, he signed off.