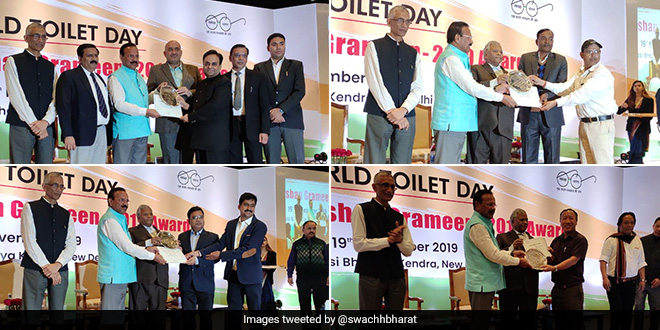 New Delhi: On the occasion of World Toilet Day, Swachh Survekshan Grameen 2019 awards were announced on Tuesday (November 19) by the Ministry of Drinking Water and Sanitation. Among the larger states (population more than or equal to 30 lakh), Tamil Nadu topped the charts. In the category of smaller states and union territories (population less than 30 lakh), Mizoram held the first position followed by Daman and Diu and Sikkim. Swachh Survekshan Grameen 2019 that recognised the top performing states and districts on the basis of quantitative and qualitative sanitation parameters, covered 33 states and union territories (UTs), involving 683 districts and 17,209 villages.

#TamilNadu, #Haryana, #Jharkhand, #Gujarat and #Mizoram were declared the top-performing states along with #DamanAndDiu, which was awarded the best performing Union Territory at the #SwachhSurvekshanGrameen-2019 Awards. Here are some glimpses. #WorldToiletDay2019 #WorldToiletDay pic.twitter.com/VNFSYKCOVB

Tamil Nadu, the sixth largest state by population, was adjudged the top performing state followed by Haryana and Gujarat. Though Haryana’s ranking slipped from number 1 in the previous edition of Swachh Survekshan Grameen in 2018 to number 2, Chief Minister Manohar Lal Khattar was pleased to be among best performing states. The minister congratulated the citizens and administration.

It is a proud moment for us that Haryana is among the top-performing states in #SwachhSurvekshanGrameen-2019. I thank my fellow citizens and the administration for this achievement. #WorldToiletDay https://t.co/zLXsPC3RB9

All the IEC (Information, Education and Communication) activities undertaken to promote the message of cleanliness and sanitation among the citizens paid off well for Daman and Diu as the union territory with a population of 2.43 lakh (as per census 2011) bagged three awards under different categories.

Among union territories, Daman and Diu was declared the top performer, whereas, between districts, Daman stood first followed by Diu and Dadar and Nagar Haveli.

Peddapalli district of Telangana was bestowed with the award of top district of India in terms of sanitation and cleanliness. Haryana’s Faridabad and Rewari took the second and third position respectively.

Districts were judged and ranked in their respective zones as well and rankings are as follow:

Also Read: Swachh Survekshan 2019: From Rank 1 to 2, Jharkhand’s Journey As One Of The Cleanest States In India

All About Swachh Survekshan Grameen 2019

Swachh Survekshan Grameen 2019 was carried out from August 14 to September 30. The rankings are determined on the basis of the survey carried out by an independent agency. As part of Swachh Survekshan Grameen 2019, the scope of the survey covered public places involving 14,236 religious places, 5,182 haats/baazar (market places), 16,569 anganwadi centres and 16,680 government schools. The researchers also received over 12 lakh citizen feedback via IVR (interactive voice response) and over 3 crore via mobile application. Along with this, face to face interaction, and assessment of health facilities was also considered.

The rankings are based on a set criterion under which 30 per cent weightage is given to direct observation of researchers wherein they check availability and usage of toilets, status of water logging and plastic littering. 35 per cent marks are given to citizen feedback received online, during group meetings and from key influencers. The remaining 35 per cent account to service level progress.