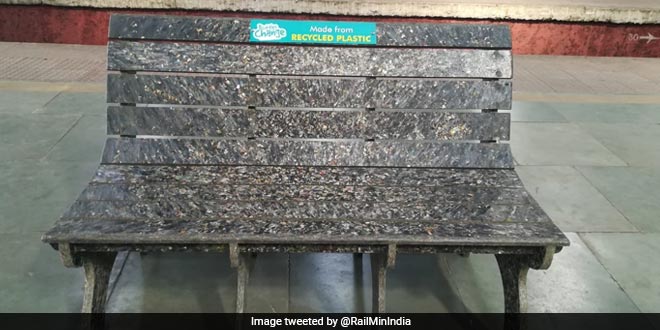 Mumbai: Three benches made of recycled plastic have been installed for passengers in the premises of Churchgate station here by the Western Railway (WR). According to a senior WR official, this is the first time recycled plastic has been used to provide a core passenger amenity in the railway premises. He said,

Following innovative and eco-friendly ways to curb menace of plastic pollution, three benches made of recycled plastic have been installed at platforms 2 and 3 at Churchgate.

Churchgate is an important station on the WR’s suburban network in the metropolis. These benches are outcome of a plastic bottle collection drive held in association with a private company, the official said. They have been made from post-consumer mix plastics such as multi-layered plastic (MLP) and plastic bags/pouches and with this initiative, the WR has joined the government’s motto of environment protection, he said.

Almost 40 to 50 kg of soft plastic went in the making of one bench, the official said, adding these seats are water-proof and ideal for outdoor locations. The Ministry of Railway applauded this initiative and said it will help in protecting the environment from contamination and ecological loss. It said,

One more unique initiative by the Indian Railways. Three benches made of recycled plastic have been installed at Churchg ate station.

The ministry tweeted on Wednesday, “These benches are strong and heavy which will help in protecting the environment from contamination”.

Rajiv Single, a member a WR-appointed panel, said this initiative has given a message that how all stakeholders can come forward to protect the environment. Earlier, nearly 109 tonnes of plastic waste was collected during a fortnight-long cleanliness drive carried out by the WR at its stations.

Related Topics:
Maharashtra Plastics
Up Next