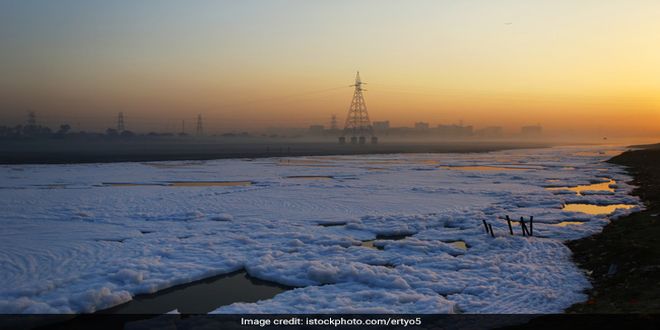 New Delhi: Wastewater discharge from industrial units into rivers and other water bodies should be reduced to zero and stringent civil penalties to strengthen enforcement of environment-related acts were among recommendations of the NITI Aayog’s comprehensive national strategy for 2022-23. The NITI Aayog on Wednesday unveiled its comprehensive national Strategy for New India, which defines clear objectives for 2022-23. It is a detailed exposition across forty-one crucial areas, including gender issues and sustainable environment, and suggests the way forward for achieving the stated objectives.

On the sustainable environment, the report said a major contributor to air pollution is the practice of burning crop residue, particularly in north India, and convincing farmers to discontinue the practice by providing alternative methods of disposal through economically productive use of crop residues is a key challenge.

Another key challenge identified by it is lack of awareness of the ill effects of pollution. The report said,

This makes it difficult to bring about the behavioural change that is critical to fighting pollution. ‘Polluters should pay for the pollution’ principle is not effectively implemented.

The report also came out with a set of recommendations to combat pollution which included measures like constituting a task force to study and implement measures to control pollution from brick kilns. It said,

The focus of this task force should be on the technological upgradation of kilns to control pollution. Emission and effluent standards for industries need to be revised and effectively implemented.

Sewage treatment plants of adequate capacity should be installed at suitable locations to make rivers pollution free, it recommended. Wastewater discharge from industrial units into rivers and other water bodies should be reduced to zero and stringent civil penalties to strengthen enforcement of environment-related Acts were among recommendations of the report.

It also recommended undertaking measures to convert vacant spaces in urban areas into urban green areas. “This will help increase the overall tree cover in the country, which is presently 2.85 per cent of the geographical area, as per the India State of Forest Report 2017,” it said.

It also expressed concern that agro-forestry is hampered by regulatory restrictions. The report said,

Besides, biodiversity conservation and maintenance of healthy habitats for wildlife have to be aligned with sustainability goals.

The report came out with recommendations to deal with air pollution which included methods like the elimination of the practice of burning biomass. It said,

The Ministry of Agriculture, Cooperation and Farmers’ Welfare should introduce suitable modifications in their guidelines of schemes for farm mechanisation to provide support to farmers to purchase equipment to collect, transport and sell biomass to processing sites for economic benefits.

The report said the air pollution issue will require continued efforts on the Pradhan Mantri Ujjwala Yojana. On climate change, it said review of all eight national missions under the National Action Plan on Climate Change in the light of new scientific information and technological advances should be made. “New national missions on wind energy, waste-to-energy and coastal areas should be developed,” it said.

The National Water Mission should be re-designed for efficient water resource management. Similarly, sustainable Agriculture should be redesigned to increase agricultural productivity and contribute significantly to achieving the vision of doubling farmers’ income by 2022-23, the report said.

The other recommendations included the use of the National Adaptation Fund for Climate Change and other global funds for strengthening resilience against climate change in sectors like agriculture, forestry, infrastructure and others and scientific and analytical capacity for climate change-related assessments should be strengthened.