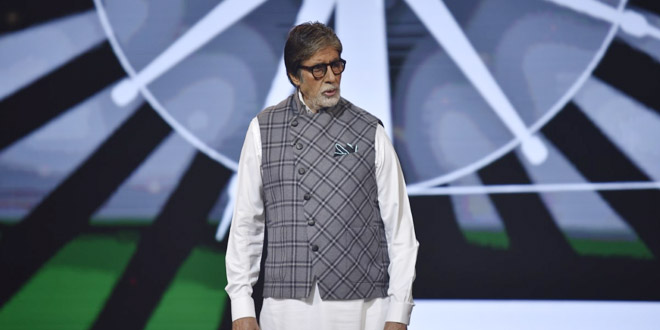 New Delhi: For the last six years, on the occasion of Gandhi Jayanti on October 2, Bollywood megastar and Banega Swachh India campaign ambassador, Amitabh Bachchan, has been hosting the special NDTV-Dettol Banega Swachh India 12-hour telethon. Mr. Bachchan, after being an advocate for Swachh Bharat for last five years, this year spoke about his vision for a ‘Swasth Bharat’. In his opening remarks at the telethon this year, he asked viewers to imagine a world where children have clean water to drink and nutritious food to eat. Urging them to make this dream a reality, he said,

Our Swasthagraha dreams of a clean and healthy India, an open defecation free India, an India where people are proud to keep their surroundings clean.

As Amitabh Bachchan turns 77, here’s a look at how as a campaign ambassador, the legendary actor’s role goes far beyond just lending his voice to the vision of a clean and healthy India.

At the launch of season 6 of Banega Swasth India in August this year, the NGO Smile Foundation unveiled the Swasth Kit curated by them to support the hygiene and nutrition needs of a new mother in rural India for 45 days, a time extremely crucial for both the mother and newborn.

During the unveiling of the kit, Mr. Bachchan took immense interest in its contents and usage and further went on to donate 100 Swasth Kits at the event.

Over the years of being associated with this campaign Mr. Bachchan has been very vocal about the need to put an end to the inhuman practice of manual scavenging. He has often said that there is no place for humans physically cleaning gutters and even dying in the process in the 21st century. During the 2018 12-hour Cleanathon, he made the commitment to make a start to the larger goal of eradicating the inhuman practice by donating 50 sewer cleaning machines.

In his blog, published right after the telethon, Mr. Bachchan wrote about his decision to contribute these machines and wrote,

On finding out that there were machines available to clean-up sewers, it was of immense wonder why the machine was not being used. So, on finding out the costs of each machine, knowing where personnel could be trained to teach them how to use them and to prevent the workers from manually going down sewers was the debate, I made a contribution of 50 such machines to be bought and put to use immediately so we can save lives and save the indignity of these workers.

T 3005 – At the NDTV Cleanathon , 'banega swachch india' , seeing the inhuman plight of the manual scavenger, I had committed to buy 50 machines for them .. today I fulfilled that promise ! 25 small individual machines and one large truck machine gifted to BMC ! pic.twitter.com/6Xn8PFmv3i

3. Gifted an excavator and a tractor to Beach Warrior Afroz Shah for cleaning up Versova Beach

“When I got to know about this man who was out there cleaning the Versova beach on his own, I was impressed. I wanted to go there and witness his work,” Mr. Bachchan said in December 2017, as he gifted environmentalist and beach warrior Afroz Shah, who put Versova Beach on the world map by undertaking a massive clean up effort, an excavator and a tractor for cleaning up the Mumbai beach.

He said that these machines will ease the process of removing waste stuck inside the sands and will fasten the clean-up process.

T 2755 – The joy of gifting for a cause as noble as the one I did today is the most satisfying experience of life .. !! Gifted an Excavator and a Tractor for Versova Beach clean up .. !! pic.twitter.com/j5DLLndE9s

4. Named as the Campaign Ambassador for ‘Darwaza Band’ under the Swachh Bharat Mission

With an aim to bring about behavioural change and encourage use of toilets and end open defecation, the government in May 2017 aggressively launched a campaign titled ‘Darwaza Band’ under the Swachh Bharat Mission. Bollywood Megastar Amitabh Bachchan, along with Anushka Sharma were named as the campaign ambassador to educate people about how open defecation leads to diseases.

5. Sensitised people through the #GreenGoodDeedsCampaign

Union Minister for Environment, Forest and Climate Change, Dr Harsh Vardhan along with the Banega Swasth India Campaign Ambassador Amitabh Bachchan, launched the Green Good Deeds Campaign in 2018, with an aim to bring about small behavioural changes in people’s everyday life, thereby making a significant impact on the environment’s health.

The ministry came up with more than 500 small acts, like carpooling, planting a sapling among others, that can help improve the environmental conditions in India. Taking this cause forward, Mr. Bachchan appeared in various promotional videos, sensitising people on doing their bit towards ensuring a better environment.

To give a push to the final leg of Swachh Bharat Abhiyan recently, the superstar took to Twitter to urge people to realise the need for safe sanitation practices, as he said,

This time, I will not ask you whether you have used a toilet or not, will not tell you to construct a toilet for yourself. You, yourself are a better judge.

Ever since the launch of Swachh Bharat Abhiyan in 2014, Amitabh Bachchan has been at the forefront of popularising the campaign and encouraging people in construct toilets and follow proper waste management practices, so that India, apart from becoming an open defecation free country, can also become a waste-free country. He has also been part of government’s Polio eradication campaign for years and has been working with the government in campaigns to fight tuberculosis and Hepatitis B, both of which the actor has himself suffered from and overcome.