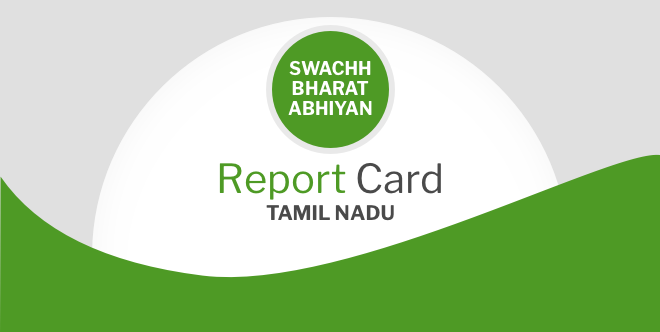 Mumbai: Sanitation programmes are not new to India. These have existed even before the Swachh Bharat Abhiyan that was launched in 2014. What seemed to be different about the Swachh Bharat Mission was a defined goal, with a time bound approach that involved everyone right from gram panchayat to state governments to work for a common goal – building toilets and putting an end to open defecation. Challenges were many, from age-old mindset to topography to tenancy laws, different places had different issues to grapple with. But with 19 states having accomplished the task of providing toilet access to everyone and many more like the southern state of Tamil Nadu all set to join the Open Defecation Free (ODF) league soon, Swachh Bharat Abhiyan seems to have had more impact across the country than any of the previous sanitation programmes. 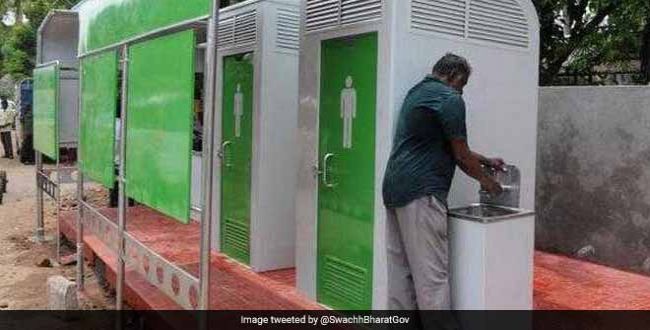 Tamil Nadu hopes to declare all its cities and villages ODF by October 2, 2018

With over 52 lakh toilets built within a period of four years, the eleventh largest state in the country, Tamil Nadu is likely to declare all its villages and cities open defecation free (ODF) on October 2 this year. The state has a total of 32 districts of which 31 have been declared free from open defecation.

Tamil Nadu has improved its rural sanitation coverage by more than 50 per cent in four years. Today, the rural areas of the state are on the brink of becoming open defecation free. All the district magistrates in the state were asked to regularly monitor the progress made on the sanitation front from day one. Several NGOs, self-help groups and local people have contributed immensely to the rural sanitation success of Tamil Nadu, said State Rural Development Director K. Baskaran. 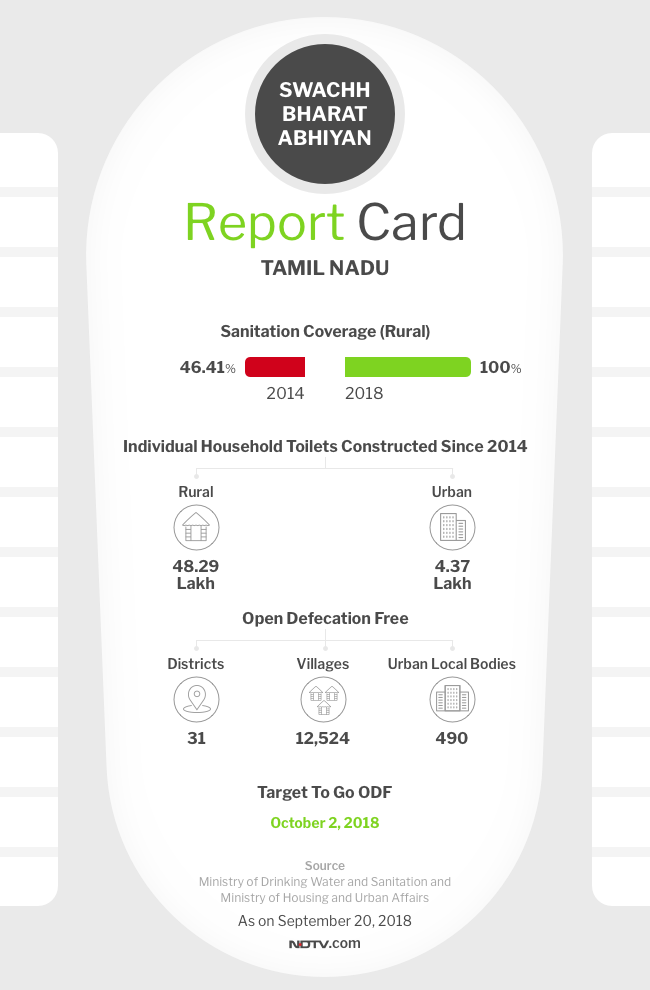 Like its rural counterpart, the urban areas in the state have also delivered an impressive performance. Of the total 664 urban local bodies (ULBs), 490 have attained the status of ODF and the remaining are going through a third-party verification by the Quality Council of India (QCI). 4.37 lakh toilets have been built and the state will soon complete construction of 87,000 toilets to meet its sanitation target. 69,832 public and community toilets have been constructed across urban areas of the state to ensure migrating population and people living in slums have easy access to toilets.

Though the state had earlier committed to eradicating open defecation from state’s urban areas by 2015, the cities will now officially be declared ODF on October 2 this year. The long wait has been due to problems like space crunch, lack of public toilets, its maintenance and unwillingness of people to use them. All these factors combined prevented the urban local bodies from declaring themselves ODF.

Constructing individual household toilets wasn’t a major problem in Tamil Nadu as majority of the households were already equipped with a toilet. Public toilets were the main hurdle that prevented municipal bodies to declare themselves ODF. It was important for major cities like Chennai, Madurai and Trichy to turn ODF. Now that they have achieved the task of providing toilet access to everyone, state’s overall sanitation coverage increased. Seeing their work, other municipal bodies stepped up and built more public toilets granting people adequate access to the same, says a senior official from Swachh Bharat Mission-Urban (SBM-U).

The swift and speedy construction of toilets in rural and urban parts of Tamil Nadu can be attributed to the various schemes or tools adopted by the authorities to spread awareness and push people to give up the habit of open defecation. In addition to this, ‘suo moto’ action taken by the people lessened the burden on authorities.

Here’s a look at some of the unique examples seen across cities and villages of Tamil Nadu that helped the state increase its sanitation quotient:

Women And Children Are Swachhta Heroes In Rural Tamil Nadu:

Women in rural Tamil Nadu overcame all obstacles and constructed toilets for their children. #Swachhagrahi pic.twitter.com/pNkby4XbXz

Self-Help Groups in eight districts of Tamil Nadu have been part of a sanitation revolution. Overcoming their initial reluctance to talk about open defecation, 800 women become part of a Sanitation Brigade or Swachhta Dhoots. Public Affairs Centre (PAC), a not for profit think tank in its report pointed out that 800 women in six districts of Tamil Nadu were effective foot soldiers in state’s quest for total sanitation.

In Pasumpon Nagar under Sakkimanagalam Panchayat near Madurai, villagers used the wild growth of prosopis juliflora bushes in an open ground to their advantage by defecating behind them. K.Selvi, secretary of the Grama Varumai Ozhippu Sangam (Village Poverty Reduction Committee) decided to change this and motivate people to build toilets. The 30-year-old not only convinced 67 families to build their own toilets but also built composting pits in the open ground. Seeing her efforts, 30 other women from Sakkimanagalam panchayat followed suit and helped the village turn ODF.

While in most districts women are spreading awareness, 500 women from Salem district turned into masons and helped the authorities to construct toilets. Women from socially backward areas were given masonry training for building toilets. 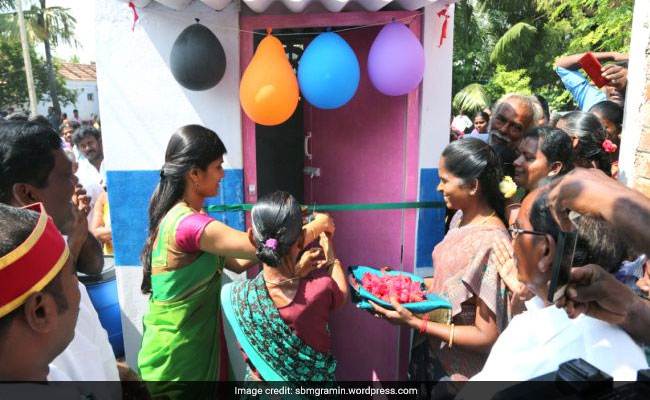 School children in many government schools across villages have become part of ‘Sanitation Club’. Like every other club, this club also strives towards spreading a social message by conducting various activities in schools.

Members of these clubs create awareness on toilets usage through swachh rallies, public meetings and door to door visits, once a week. They also use local resources to print and set up sanitation messages at various points within the school, says Sankar N, Zila Swachh Bharat Prerak from Kanchipuram district.

Meanwhile, Class 4 students of Kurumbapatti village solved the problem of lack of clean toilets in their school, by building urinals from plastic waste water cans. 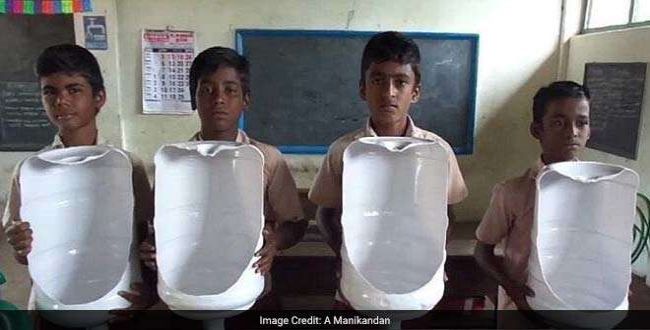 The urinals did not have a proper drainage system and that resulted in stench and ailments across the school. The five students came forward with a plan, and what would have taken thousands of rupees, they accomplished for a meagre amount of Rs. 600, said D. Kesavan, science teacher at Panchayat Union Middle School.

Despite attaining the ODF status, many regions continued to witness open defecation instances and one such city was the capital of the state, Chennai. To save itself from embarrassment, the Greater Chennai Corporation (GCC) imposed fines of up to Rs 500 for people found defecating in the open. Similarly, other civic bodies in the state are following the suit to curb open defecation.

In order to speed up the ODF process, the Karaikal municipality had given gold coins to ten lucky winners who finished constructing toilets before March this year.

To promote the concept of ‘sanitation for all’, the Tiruchi City Corporation installed state’s first ever toilet exclusively for transgenders at a city bus stand. The toilet constructed at a cost of Rs 9 lakh was thrown open to public in June this year and doesn’t collect user charges.

We are one of the first cities to provide toilets to the transgender community. This will ensure much needed privacy and sanitation for them, says N. Ravichandran, Commissioner, Tiruchi City Corporation

‘Let’s Fund Together, Build Together, Unite Together’, this is a motto of ‘Toilet First’, a crowdfunding initiative started by the Coimbatore Municipal Corporation. With an impressive website and a catchy logo, a full-fledged social media campaign, and tremendous amount of local involvement, the initiative is building toilets by taking money through donations. Started in April 2016, till now the initiative has led to construction of 3,121 toilets in the city.

Transition From ODF To ODF Plus

Once the state is declared ODF, the authorities in rural and urban areas will work towards sustaining the status. In addition, the local civic bodies and panchayats will move towards attaining the status of ODF plus by managing its solid and liquid waste.

Post ODF declaration, an area often risks falling back to old habits of open defecation if not monitored properly. The ODF plus journey will help towards sustaining the toilet usage. Social development projects will be taken up to develop a sense of cleanliness among people in ODF areas. Projects focusing on tree plantation, sustainable water supply, training people from an area to turn recyclable items into useful goods and improve their social outlook by enabling them to understand the importance of cleanliness and its use will be taken up, added the SBM-U official.

Going forward the state intends to strengthen the awareness activities that helped it achieve ODF status to now focus on scientific disposal of waste generated.